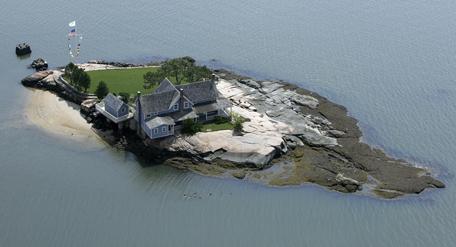 The show’s premise revolves around placing two people who met online — and have never interacted in person — in a beautiful but compact environment.

The property takes up about an acre and wields both a sand covered beach and a manicured lawn. Upon it sits a four bedroom, two bathroom Victorian home that was built over a century ago.

The island has been on the market since 2012 and is currently being brokered by Tony Nuzzo of William Pitt Sotheby’s International Realty, Madison Brokerage in Connecticut.

Brokers Weekly isn’t overly concerned with the drama that unfolds between star-crossed digital daters, but one question did spring to mind; Is it wise to hand over how a property is presented to a production crew and then broadcast the result to a TV audience?

“We feel the benefit is exposing an island property to an audience who has never experienced a New England island,” Nuzzo told Brokers Weekly. “Everyone is familiar with the Caribbean Islands but few know of this archipelago located just two hours from New York City.”

Nuzzo said that the decision to offer Belden as a backdrop was a simple one and that Sotheby’s did not seek out A&E’s platform, the channel came to them.

“We were approached because our property offered ultimate privacy, a storybook restored cottage and proximity to New York City,” said Nuzzo.

“There was no hesitation. Just the fact that this property was selected for the show speaks to its rarity and privacy. The exposure has been tremendous.”

“As in any business, it’s important to hit on all cylinders when marketing a product,” he said. “Public relations is an important part of that equation. Why wouldn’t you want to use every tool in the tool box?

“While appearing on a television show may not necessarily be the factor that sells a property, it may generate the kind of buzz that gets people talking and makes them aware of your listing.”

Purcell did caution, however, to be mindful of the audience and how a property will be featured. “You don’t want to cheapen the listing by appearing on the wrong kind of show.”

Chris Leavitt, of Bravo’s Million Dollar Listing Miami admitted that he was cautious about making a move into television.

“I was of course a little bit hesitant, who knows how people are going to perceive me,” he said.

A broker for Douglas Elliman, Leavitt sold more than $120 million worth of real estate last year.

Though clearly on his way to earning both a comfortable living and a coveted reputation before the lights went on and the cameras began to roll, he said he is looking forward to an even more successful 2014 thanks his television exposure.

“I anticipate a lot more (sales) than that this year. It’s really incredible how many people have called me, and I’m telling you, it’s every single day,” he said.

“It’s almost as if I’ve done my listing presentation and interview already on the show.ˮ
Leavitt credits MDL Miami for helping him land a deal to sell units priced from $10 to $50 million at the new Bath Club Estates in Miami Beach.

Success aside, Leavitt admitted that choosing to turn over your brand and likeness to a production crew is a significant maneuver that warrants serious thought before a decision is made.

“I just had a really innate inner feeling that I go with everything I do in life. I made sure everything I did on the show was extremely authentic and me,” he said.

As far as showcasing a property on a reality show geared towards generating drama and unpleasant situations, Leavitt was a bit skeptical.

“I don’t know if I like that approach necessarily,” said Leavitt, “but I think that it could be an amazing tool.”
One approach that Leavitt obviously does like is a platform that is real estate driven. like Million Dollar Listing.
He said he has seen the selling process be hastened by a property’s television exposure on multiple occasions. Even then, some sellers were hesitant.

“I believe that it is a gamble but it’s all about the way that the agent that is representing a property shows it,” he said.
“It was difficult to get people to accept shooting their properties [for season one], but I think I’m going to be able to get more of my clients on board [for season two].”

Danielle Garofalo, director of digital marketing at TOWN Residential has no doubt that the right vehicle can lead to invaluable exposure.

“If the particular show that it’s going to be on reaches your intended market, then yes, I don’t see anything wrong with putting the property on television,ˮ said Garofalo.

Belden was last purchased in 2006 for $2.77 million by Christine Svenningsen, an island collector. It’s a member of the Thimble Islands, an archipelago off the coast of Connecticut.