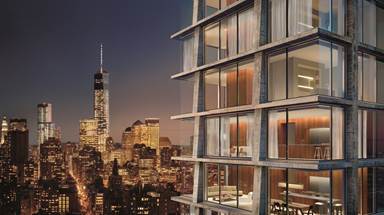 Ian Schrager has unveiled the design of 215 Chrystie, a new hotel and residential building scheduled to open in downtown Manhattan in 2016.

Located in the Bowery, across the road from Roosevelt Park, 215 Chrystie  reunites Schrager and Herzog & de Meuron, whose previous collaborations include the nearby 40 Bond, a radical redesign of a traditional cast-iron building that was the architects’ first residential project in the United States.

“215 Chrystie is the ultimate expression of Uptown meets Downtown.  It is both tough and refined at the same time.  This inherent contradiction, in a symbiotic relationship, is what makes it so unique and different.  The presence of one attribute serves to showcase the other. I’d like to think of it as ‘refined gritty’ or ‘tough luxe’,” Schrager said.

“This is a truly international collaboration, bringing together leading architects and designers from around the world to create a building and residences for the next generation–a revolutionary new genre of urban living.”

Herzog & de Meuron’s design responds to the existing mid-block site in the Bowery, using  raw concrete both inside and out. Floor-to-ceiling windows feature mullionless corners and extra-wide panes of glass custom-designed by the architects to provide unobstructed 270 and 360-degree views of New York City and the surrounding area.

“Our idea was to stack two very distinct typologies on top of each other, and on one hand to express their difference, while on the other to unify them within the same building skeleton,” said Jacques Herzog. “It was also our aim to complement them with a diverse mix of uses so that the building becomes like a city within the city.”

The structural skeleton defines the architecture of the building, Herzog explains. “To introduce a sense of scale and to further foster the expression of each individual floor, each column is slightly inclined. The prominent corner of the building facing Chrystie Street is where the two geometries of the inclined columns meet. Rather than giving one direction priority, the two directions are braided together. The result is a sculptural corner column that becomes the visual anchor for the entire building.” 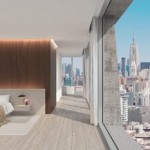 In the hotel portion of the building, each room has one large window. The windows tilt toward the sky to create more interior space and increase the reflection of the sky in the glass, while allowing for more privacy.

The views and transparency of the upper floors are maximized in the residential tower, in which every second column is omitted, and on the top two floors of the hotel, which feature large, open-air terraces. The windows on these floors are vertical and recessed, making them less reflective and less visible.

Herzog & de Meuron’s design also incorporates aprivate garden, which is separated from the street by a dense green wall that acts as a physical barrier as well as a visual screen. 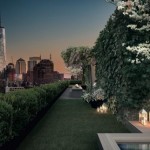 “The interiors of the 215 Chrystie residences are charged with atmosphere, where the fundamental qualities of light, surface and proportions are such that the experience of space itself is transformed,” saidPawson. “The goal was to express the details of life in the details of the architecture.” 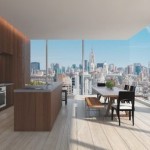 Douglas Elliman Development Marketing is handling sales at the project, which is being developed with the Witkoff Group. Prices are reported to start at $7 million.