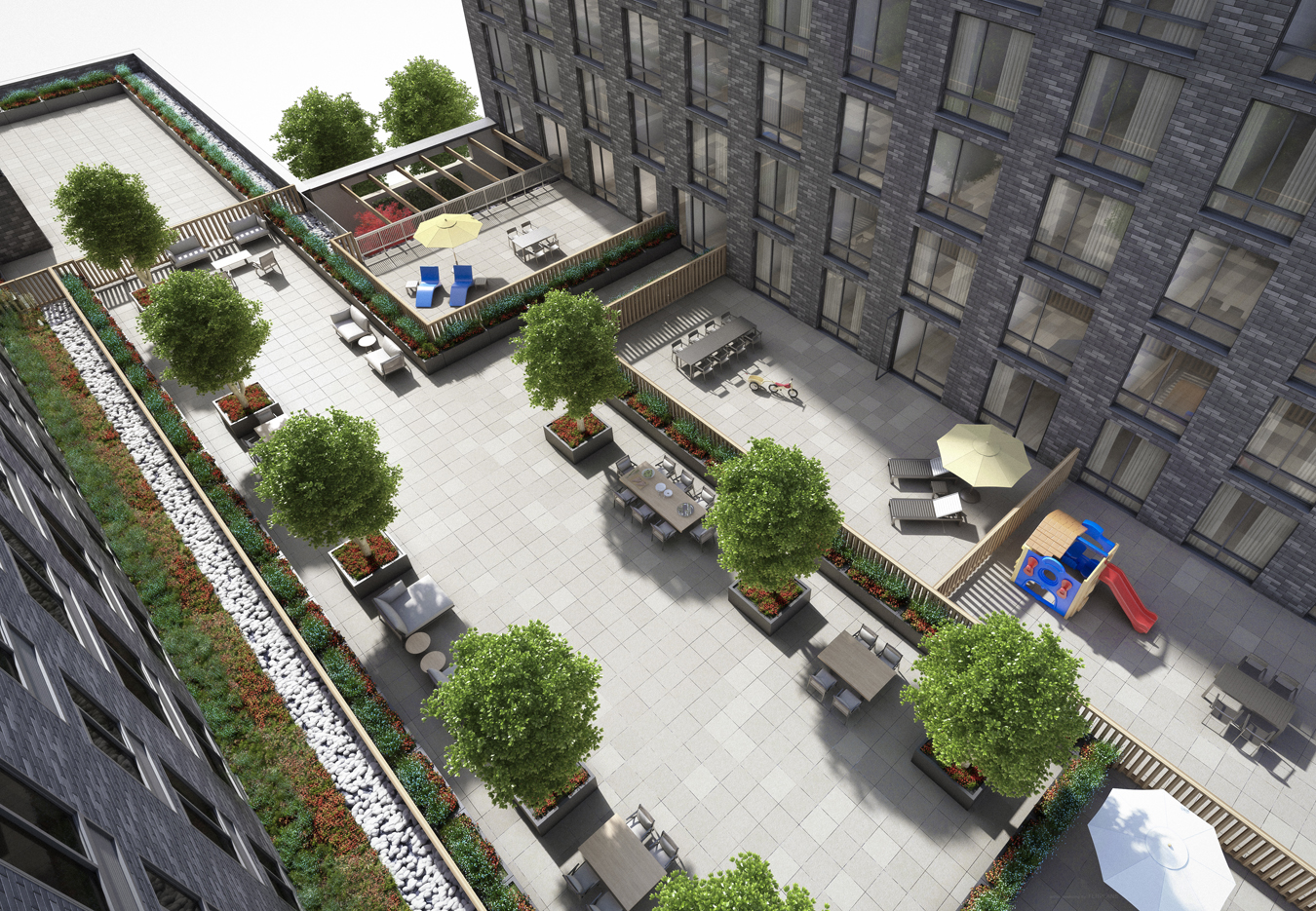 The booming area of northern Manhattan is adding another gem to its roster of new apartments with L+M Development’s luxury condo building, The Adeline.

“The interest has been amazing,” said Julia Boland, director of sales of the building and managing director at Halstead Property Development Marketing, which is handling the marketing and leasing of the building. “There were weeks where we felt we were trampled, but it’s all good.”

Builders are on the home strait of construction and the team expects to start move-ins by the end of the year. Sales began in January and the building is 82 percent sold.

The project has been taking shape since 2010, when L+M Development Partners looked to add a condo building to the growing neighborhood.

“We’ve been very active in the neighborhood for many years,” said Tell Metzger, development director at L+M. The firm developed the popular eco-friendly Kalahari building just across the street from The Adeline, and also owns several rental buildings nearby.

“I think that we as a development company like to think about neighborhoods and the community we work in,” said Metzger.

“We are active in Long Island City with a couple of developments, along the Williamsburg waterfront as well, and we can add a lot of value and lend a hand where we can, helping to nurture the neighborhood and help it to grow.”

Metzger pointed to the “vibrant street life” around The Adeline and proximity to transit — the 6 and 2/3 trains are just blocks away — and the amenities in the neighborhood, including grocery stores, religious centers, bars and retail.

“Harlem seems to be a place with tremendous natural beauty and life and remains under-valued, so it’s an exciting place to be,” he said.

Harlem has been increasingly drawing investors and developers in recent years.

According to brokerage firm Ariel Property Advisors, 70 multifamily buildings in Northern Manhattan traded hands in the second quarter of this year for a total of $327.9 million — a 26 percent increase year-over-year. In July, a further 22 buildings sold for a total of $110.7 million.

The Adeline has 83 units and although all one bedrooms have sold out, the building is still offering two, three and four-bedroom homes starting at $1.125 million.

One remaining 1,534 s/f penthouse has three bedrooms, two baths and 894 s/f of dedicated outdoor space.
Some of the featured amenities of the building include underground parking, private roof spaces along with more than 8,000 s/f of common roof space, a package room with cold storage, washers and dryers in every unit with additional washers and dryers in the basement, a gym with a kids room, and floor-to-ceiling windows in the units.

There are low common charges and real estate taxes, and the project anticipates a 25-year 421a tax abatement.
Boland estimated that 80 percent of the buyers at the building will be living there, and that investor concentration is low.

The building also has a 24-hour doorman, a resident lounge, and is just a few blocks to Central Park, Marcus Garvey Park, and Morningside Park.

Boland wasn’t as jazzed about the area when she first moved to Harlem ten years ago with her family and gut-renovated a Brownstone.

“Now I can’t imagine living anywhere else,” she said. “The neighborhood used to be a value play, now it’s a destination neighborhood.”