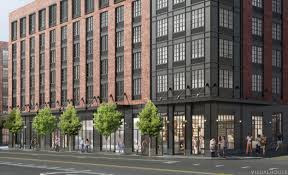 A new 24-hour market is coming to the Brooklyn waterfront.

Park Tower Group announced that Riverside Market will open at new 1,500 s/f store at 7 Bell Slip in Greenpoint Landing in the fall.

“We’re certain that the market’s offerings will appeal to our tenants and to our Greenpoint neighbors at large. And after months of quarantine, we view Riverside Market’s upcoming arrival as a symbol of New York City’s endurance and continued appeal!”

Peter Schubert and Bill Strassman of TerraCRG represented the tenant in the lease.

Greenpoint Landing is a 22-acre development site that stretches for half a mile along Brooklyn’s waterfront being master-planned and developed by Park Tower Group.

In 2005, the City of New York designated the site for residential use under the Greenpoint-Williamsburg rezoning. In its entirety, Greenpoint Landing will include an estimated 5,500 residential units – 1,400 of which are affordable housing – as well as a new pre-k through 8th grade public school and four acres of public open space.

In a joint venture with Brookfield Properties, Park Tower Group is developing a total of 2,000 units across four development sites at Greenpoint Landing.

The public waterfront esplanade at Greenpoint Landing has been extended to connect the newly renovated Newtown Barge Park and the existing waterfront open space. In total, there are now over three acres of waterfront public open space including picnic areas, open lawns, and a sports field.

In addition to the four sites currently being developed, an additional 300 units of affordable housing have already been completed in a joint venture between Park Tower Group and L&M Development Partners.