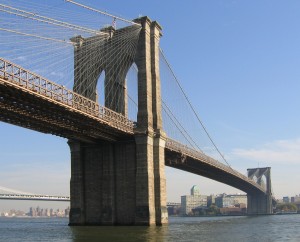 A new report by think tank Center for Urban Future argues that the city’s infrastructure is in dire need of repair, requiring investments of $47 billion over the next four to five years.

“Simply put, too much of the city’s essential infrastructure remains stuck in the 20th Century — a problem for a city positioning itself to compete with other global cities in today’s 21st Century economy,” the report states. Some 162 bridges in the city — 11 percent of the total — are described as “structurally deficient”. According to the report, 1,000 miles of water mains are over 100 years old, which led to 403 water main breaks last year. Ageing gas mains are deemed responsible for 5,835 gas leaks in 2012 alone.
As most commuters know first-hand, the subway system isn’t exactly up to date either. 269 out of 729 of mainline subway signals are older than 50 years, which “slows the movement of trains and forces maintenance workers to build their own replacement parts because manufacturers no longer make them.”

The report partially blames former Mayor Michael Bloomberg, claiming he neglected repairs and infrastructure updates over new construction during his 12-year administration. 30.4 percent of the city’s roads are currently in “poor” or “fair” condition, up from 15.7 percent in 2000.

Although Bloomberg had promised to replace 80 miles of ageing water mains every year, the report only an average of 27 miles have been replaced annually since 2007.
New York real estate owner and developer Bill Rudin, who co-sponsored the report in his role as chairman of the Association for a Better New York (ABNY), was less willing to criticize the former mayor, pointing out that he invested billions of dollars in infrastructure.

But Rudin was equally vocal on the importance of improved infrastructure.

”It’s important to have a livable and workable city, that’s the essence of why ABNY was created,” Rudin told Real Estate Weekly, recalling the dismal state of New York City infrastructure in the 1970s. “I am in the real estate business, and I know that you have to spend capital in order to renovate.”

“We are confident that this report will shine the light on an area most people don’t focus on, but just kind of expect to happen,” Rudin said, adding that he hopes public-private partnerships will be part of the solution. Unsurprisingly, the biggest hurdle may be a lack of money. The report calculates that shortfalls in current capital plans leave a funding gap of $34.2 billion over the next five years.