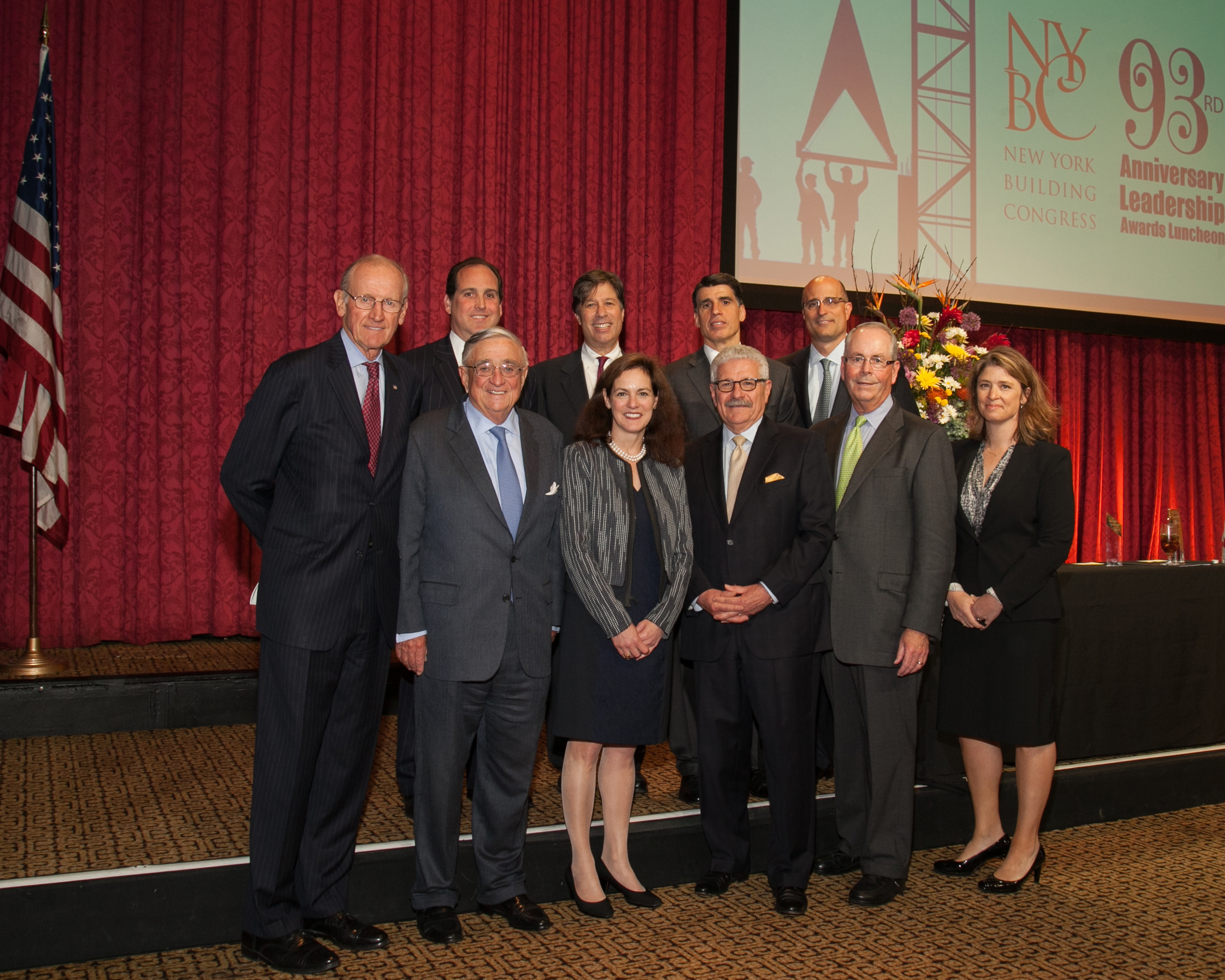 Nearly 1,100 men and women from the design, construction, and real estate community gathered on May 15 to pay tribute to John E. Zuccotti, John M. Dionisio, and Thomas F. Gilbane, Jr. for their lifetimes of professional achievement and civic devotion, during the New York Building Congress 93rd Anniversary Leadership Awards Luncheon at the New York Hilton Midtown.

The luncheon included a greeting on behalf of Mayor Bill de Blasio from Deputy Mayor for Housing and Economic Development Alicia Glen.

Deputy Mayor Glen applauded the afternoon’s honorees and the industry for helping to create a strong, growing, and diverse city.

She then implored the industry to work collaboratively in helping to achieve the administration’s top priority – to create 200,000 units of affordable housing for half a million New Yorkers.

“Every single person in this room needs to be part of this. We ask you to throw your weight behind the effort,” which, she added, will spur 195,000 construction jobs over the next decade.

Rudin Management vice chairman and president Eric Rudin presented the 2014 Jack and Lewis Rudin Award for Service to New York City to Brookfield Office Properties co-chairman John E. Zuccotti.  “It is easy to call John Zuccotti a man for all seasons,” said Rudin. “His distinguished career in City and federal government and in the private sector, as well as his many charitable endeavors, are an inspiration to us all.

“My father Jack holds John in great esteem. He is one of a few select people who have made New York City what it is today — a global leader without peer.”

In his acceptance, Zuccotti regaled those in attendance with a humorous and self-deprecating look at his career, which put him face to face with real estate bankruptcies, municipal financial crises, the rise of Fidel Castro, and even the Iran hostage crisis.

On a much more serious note, he spoke of his pride in the opening of the 9/11 Memorial Museum, which had occurred earlier that day.

Scarangello said, “Under John’s leadership as CEO, AECOM tripled its revenue and doubled its workforce, while considerably expanding its service offerings and geographic reach. In 2010, AECOM acquired Tishman Construction, and they have worked together on many of New York’s major projects, including the Second Avenue subway, the World Trade Center, and East Side Access to Grand Central Terminal.

“In the middle of all this, John led the Building Congress with distinction over the past two years. ”

Dionisio said, “In the engineering and construction industry, there are a lot of great organizations. The beauty of the Building Congress is that it brings everyone together – all of the professionals who make things happen in New York City.”

He then paid tribute to his colleagues throughout the industry for the active and positive role they played in helping New York recover and rebuild in the aftermath of 9/11 and Superstorm Sandy.

He closed by saying, “I am really proud and honored to share this award with my colleagues at AECOM as well as all of you who are so commited to the future of this City.”

“Throughout his extensive career, Tom Gilbane has built a reputation for quality work and leadership. Under his leadership, Gilbane has expanded well beyond the domestic market, with projects across the globe and more than 50 U.S. and international offices,” said Jones.

“Tom’s impressive community service activities range from Co-Chairmanship of the ACE Mentor Program of America to the Construction Industry Roundtable, National Academy of Construction, and the Building Congress.”

Gilbane used his acceptance to praise the tremendous accomplishments of his family members in building the firm and his current colleagues for being “stewards of a legacy” that has been built upon the core values of integrity and caring for others, as evidenced by his firm’s contributions to the Rapid Repairs effort that assisted thousands of New Yorkers in rebuilding their homes after Superstorm Sandy, which he said was “one of our proudest moments. Construction is the ultimate team sport and I’m proud to be part of such a great team.”

“I would like to express my sincere appreciation to all of you for joining us this afternoon,” said Resnick.

“This Luncheon’s success is marked by attendance of almost 1,100 and nearly $800,000 in financial support, which will help the Building Congress continue and expand upon its mission. Our construction market in the City continues to strengthen, and you see evidence of that thoughout the five boroughs. But the future is even brighter.”