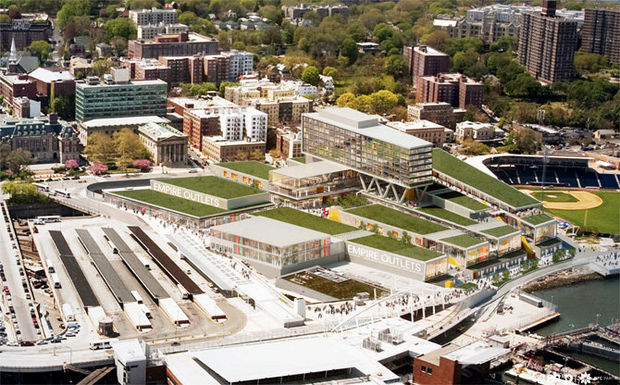 Seattle-based Nordstrom, Inc. announced today plans to open a Nordstrom Rack at the Empire Outlets in Staten Island, N.Y. The approximately 34,000-square-foot store is scheduled to open in fall 2016. The property is being developed byBFC Partners.

The newly built, two-level Rack will be a part of roughly 100 retailers going into the one-million-square-foot waterfront development within the St. George neighborhood of Staten Island.

The project will be built above current transit parking and integrated into the Staten Island Ferry terminal. Adjacent to the center, tourist elements will include a hotel, 40,000 square feet of restaurant space, a minor league baseball park and the world’s largest observation wheel.

“We want Nordstrom Rack to be Staten Island’s destination for great brands at great prices,” said Geevy Thomas, president of Nordstrom Rack. “We’ve been focused on finding the best locations across New York City and are thrilled to have the opportunity to serve New Yorkers and tourists alike at this major transportation hub and destination that will combine great retail, entertainment and restaurants.”

Nordstrom Rack at the Empire Outlets will be the company’s seventh Rack location in New York. Currently Nordstrom operates two full line stores and six Rack stores in the state. A new Nordstrom Rack will open in Queens September 10 and a second location in Brooklyn is scheduled to open October 8. The first Rack opened in Manhattan’s Union Square in 2010.

“We’re excited that Nordstrom Rack, one of the premier retail brands in the country, will anchor Empire Outlets,” said Joseph Ferrara, a principal at BFC Partners, along with Donald Capoccia and Brandon Baron. “For the first time, Staten Islanders, New Yorkers and visitors from both the U.S. and abroad, will have the opportunity to shop at NYC’s first outlet center, located on the New York Harbor with glorious views of Manhattan and its skyline.”