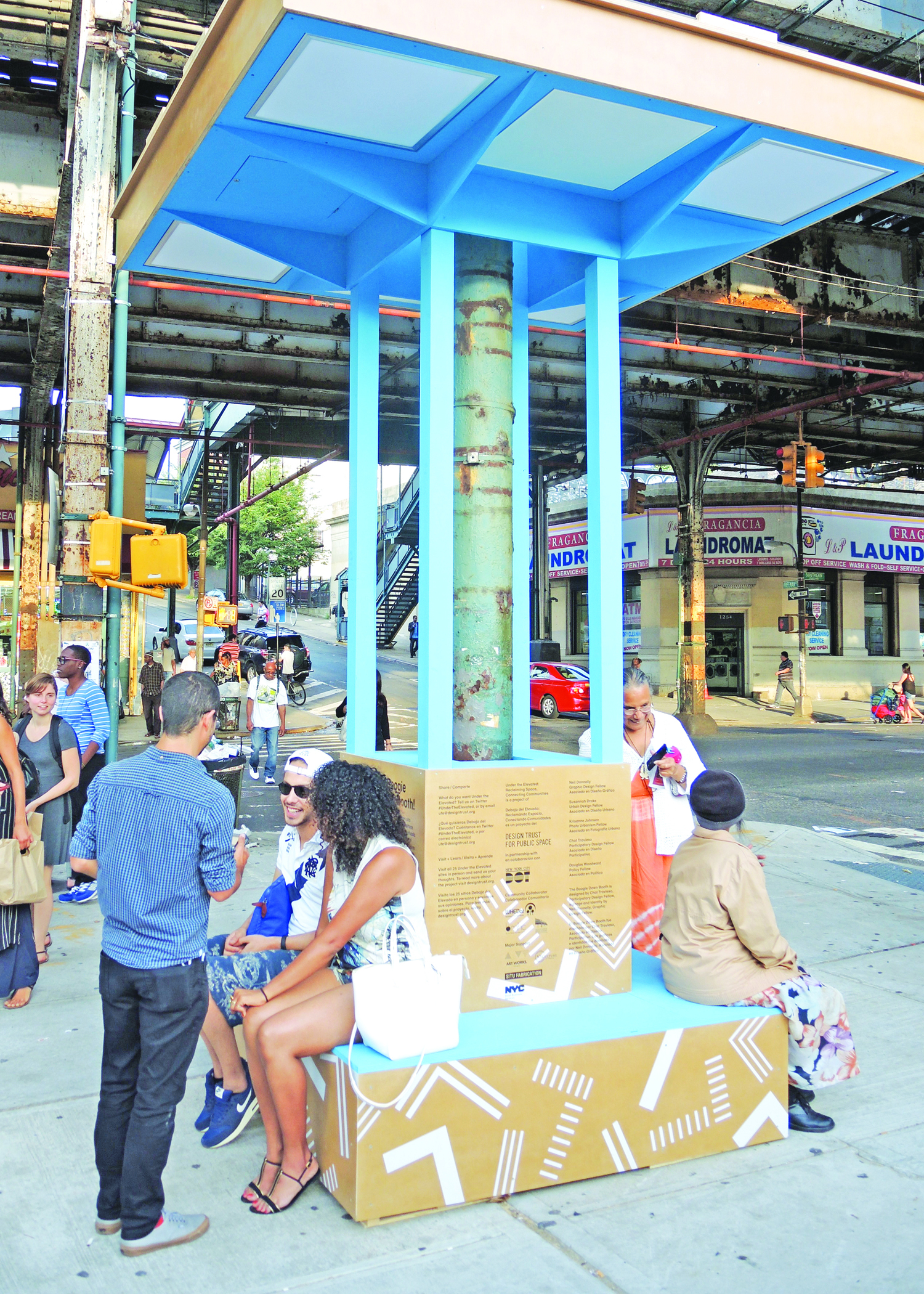 The NYC Department of Transportation (DOT) and the Design Trust for Public Space last week unveiled The Boogie Down Booth, the second prototype for the Under the Elevated project in collaboration with the Bronx Music Heritage Center (BMHC) of the Women’s Housing and Economic Development Corporation (WHEDco). 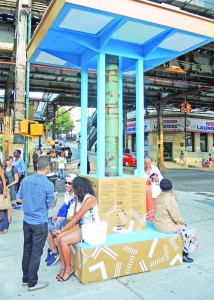 Located at the Freeman Street station bus stop underneath the 2/5 subway tracks in the Bronx, the temporary resting spot provides solar-powered lighting and directional speakers playing Bronx artists’ music to enhance the space beneath the train tracks.
The community provided guidance on the design and function of the installation.
It serves as a test to make the area a more hospitable place for community residents and visitors and has attracted support from the NYC Department of Small Business Services (SBS) through a Neighborhood Challenge grant.
DOT officials were joined by Executive Director of the Design Trust Susan Chin, WHEDco Founder and President Nancy Biberman, and SBS Deputy Commissioner Michael Blaise Backer.
“DOT’s partnership with the Design Trust is leading the way to improving the conditions beneath elevated infrastructure citywide, transforming these once under-used spaces into invaluable neighborhood assets,” said DOT Commissioner Polly Trottenberg.  The speakers installed at The Boogie Down Booth play tunes by local artists, including Grammy-recognized musicians, to counteract the sound pollution caused by trains above the street and the surrounding traffic.
Although over 10,000 live music seats in dozens of clubs and theaters in the neighborhood have been lost over the years, artists from a wide array of cultural backgrounds make the Bronx their home and create new music in the borough.
There are plans by WHEDco for two additional booths to be installed at a different location on Southern Boulevard and in Melrose, where the BMHC’s permanent home will be housed, providing multiple points to listen to Bronx music in the neighborhood.
The installation also encourages users to share their thoughts on how the underused area can be improved. People can leave comments online vie email – ute@designtrust.org.
The installation at the Freeman Street station, which will be installed through September 15, 2014, is the second of several that will be developed as part of the Under the Elevated initiative led by the Design Trust for Public Space.
The citywide effort is aimed at developing strategies for maximizing the function, use, and spatial qualities of the millions of square feet of space underneath NYC’s bridges, and elevated highways, subways, and rail lines.
The temporary installations will pave the way for a systemic change across the city that will transform the environment around its vast transit infrastructure.
“At the perfect juxtaposition of new housing, businesses, increasing local workforce, and empowered local organizations, the Bronx is ready to reclaim the neglected space under these elevated train tracks, while highlighting its rich and diverse musical heritage. I’m proud to see the realization of The Boogie Down Booth, which marks a major headway in the Under the Elevated project that may prove to inspire solutions for various pressing issues around the city’s transit infrastructure, such as air quality, lighting for safety and sound amelioration,” said Design Trust Executive director Susan Chin, FAIA.