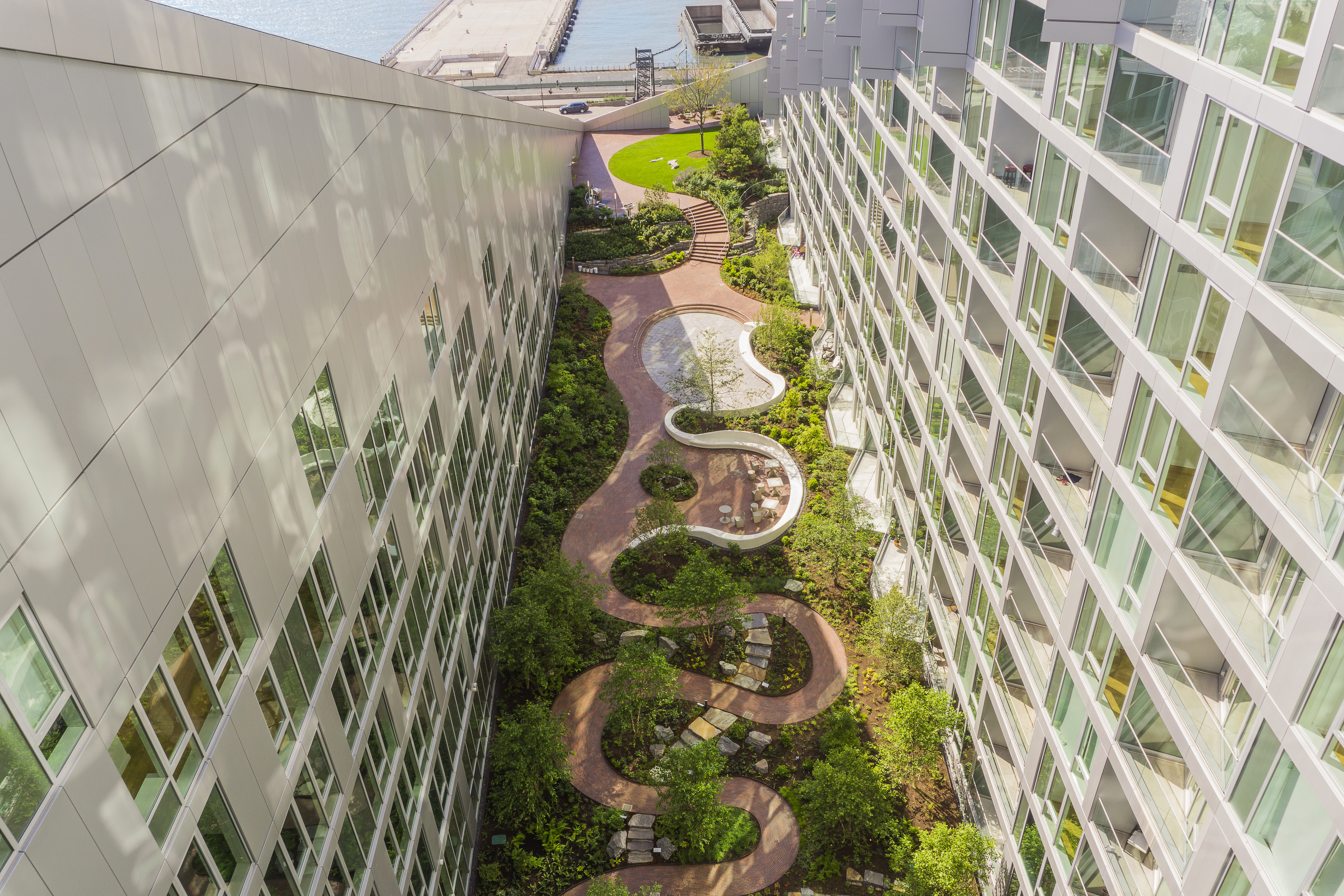 As New York City’s skyline grows ever taller, access to greenery, open air and space becomes ever more important at every level of new development.

Spectacular new designs such as the Durst Organization’s VIA 57 West and the renovation of older landmarks such as Chelsea’s Walker Tower have incorporated cutting-edge garden and rooftop amenities, but projects as diverse as affordable housing and renovated office buildings are not far behind.

At the first line of consumer feedback brokers are hearing more and more requests for both private and public access to green space. Ari Harkov at Halstead believes that “the private terrace is by far and away the most valuable, but we see the full gamut. In our experience families with young children don’t usually look for rooftop or balcony garden access – heights and little kids don’t go together.  They’re more popular overall with a younger demographic that likes to entertain.”

Vickey Barron at Douglas Elliman says of her work with Walker Tower that when the building was first converted to residential “the roof garden was simply seen as one feature among many.  Since then it’s become one of the top resale points. Overall in the luxury market, outdoor space is a must – it’s one of the first two amenities people ask about, the other being storage.”

Developers heeding the call for open space are also attuned to the market. L& M’s Tell Metzger notes that the interest in rooftops and gardens is “tremendous” but that it also follows a cycle. “The condo purchasers have the longer-term view and know that they will use the space; on rental side, people looking in winter months are less apt to see the value…and then around the middle of April it’s a different story!”

David Neil at the Durst Organization calls roof and garden access “absolute standard necessities at this point” and points to a new trend for office space as well as residential to incorporate green space, roof and terrace access wherever possible. “Over the last ten years we’ve seen significant uptick in retrofitting older commercial spaces.  Architecturally, setbacks were a negative effect with attendant water run-off and unattractive views.  By retrofitting our portfolio to incorporate green space we’re turning that negative into a positive – a benefit for both the environment and the tenant.  It’s a win-win for us, the planet and the people who lease there   They also rent space quicker and will meet rent premiums – our recent leases with 4 Times Square for example, received rent premium only because outdoor space was made available.”

Laura Starr, Landscape Architect and Partner at Starr Whitehouse, oversaw the design and implementation of the gardens at VIA 57 West, among numerous other projects.  She notes, “Our clients are very forward-thinking. When a developer comes to us they often have in mind the outdoor amenities that will be most appropriate and bring the best value for the demographic they are trying to attract. Most of our work with developers has been for new construction, and it’s best when we are brought in early so that the green spaces can be fully integrated into the building as its design is developed.”

She believes that the trend still preserves its cutting edge: “This coordination early on, makes it more likely that the soil depth for trees and larger shrubs is incorporated into the structure so that the gardens have the feel of being in the earth even though they are on a building.  People like to feel immersed in nature in the middle of the city – which is ultimately why people want these gardens, in addition to the economic and ecological benefits.”

In terms of new trends in rooftop and garden spaces, Ari Harkov says that private kitchens so you can entertain on the space, built-in seating and provision for shade in summer are all important.  “Heat can be a real issue in summer,” he adds.  “Privacy is a factor too: in New York there is always someone looking down on you from another building.”  He notes that some new buildings in offering “rooftop cabanas” which can be owned privately, like storage and parking spaces. “Depending on views and design, they can add up to 200K to an apartment’s resale value – or can be sold off to other tenants who want additional space.”

Vickey Barron stresses the importance of strong aesthetics for the luxury market. “What buyers are looking for is something beyond the Crate & Barrel approach – something signature, something unique.  High quality design is a huge part of the appeal of these apartments and that extends to every amenity.”

Tell Metzger believes practical concerns are also driving trends in design: “Roof gardens are being outfitted with grills and hammocks and wifi access is key – they’re being seen as fundamental components of the building.   Fifth & Wythe is an example where the designers were able to use every piece of rooftop space, and our clients really responded to that.

While there’s always going to be the use of outdoor spaces as marketing tools and they’re linked overall with a glamorous, aspirational lifestyle, we’re creating more focus in our projects on how people really live their lives. In Williamsburg, for example, lots of people work from home – so you need an element of practical use in terms of things like wifi or space to work outdoors.”

David Neil cites the design at VIA West 57 as “at the forefront of where we are with residential,” and goes on to say of Durst’s Office designs that their amenity level: “Depends on both the building and the user – we have a broad range of commercial clients and a law firm may want a very different space from tech firm.  We take it project-by-project regarding access and our approach to it.”

For lightweight, low-budget situations, Laura Starr is fond of what she refers to as “Meadows on roofs. They’re very low intensity and they provide a wonderful sense of movement as well as being easily integrated into many different architectural conditions.   We all want ‘no-maintenance’ – and there’s no such thing if it’s a garden – but the meadow approach is as close as one can get and still have a very striking total effect.”

“What you see in affordable housing is helping drive some very interesting trends regarding LEEDS and other related aspects of design,” Tell Metzger says.  “Government programs and initiatives have been driving innovation in everything from windows on roofs to storm-water retention to ADA accessibility.”

Addressing challenges, Starr says that managing a relationship between the landscape design and mechanical equipment, as well as complying with occupancy and egress requirements are the most common problems. Within these parameters, she is always aware of public space as needing to contain the private moment. “While the roof gardens have to work for social events and larger groups, we also think about the desire for solitude or intimacy.  Where could you have a moment of romance or conversation, or even a place to meditate?”

Vickey Barron cites precisely the Walker Tower’s ability to offer those moments as a key to its success. “I have to say that Walker Tower is the masterpiece in terms of roof decks.  Due to the crown of the building providing an axis, it exists as a series of vignettes – there is a beautifully functional division of spaces that provide intimacy and privacy.”

When asked for a favorite roof deck or garden design, Ari Harkov mentioned 7 Harrison Street. “It’s extraordinary, a very cool penthouse design featuring a row of trees and great indoor-outdoor flow.  We also recently had a client who brought in New Echo Landscapes for a total refit of their Park Slope penthouse terrace and the results are practical but chic. Finally there’s the penthouse apartment terrace at 415 East 6th Street — it’s a very functional and useful space that is beautifully proportioned and integrated into the living space.”

Aside from the Walker Tower, Vickey Barron finds a source of inspiration in the nearby High Line: “It’s a wonderful model because it’s like an extension of people’s homes – it’s what people are looking for, a mix of nature and the urban, people-watching and views.”

David Neil mentions 1155 Avenue of the Americas as among the Durst Organization’s top such projects: “We’re in the process of renovating this commercial tower and will provide an indoor-outdoor access that is going to be a game changer, a benchmark for the industry.”

“We had a chance to work on a 2,700 sq. ft. roof on the Upper West Side,” Laura Starr says. “It was for a client who didn’t love living in the city and who wanted a suburban lawn for his kids – we created a landscape of cor-ten steel planters, birch trees and raised beds with old stone walls, incorporating a shrubbery garden and turf lawn as well as a bluestone patio.  The client was from Connecticut and we like to think we gave him the view he would have back home.”