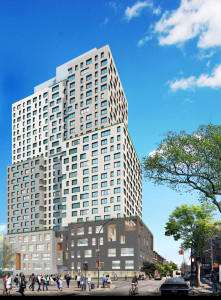 Architect Jonathon Marvel designed the luxury rental building that will rise 26 stories and have a public school at its base.

The building is steps away from the Atlantic Terminal Transit hub and the shops on Flatbush and 5th Avenue.

664 Pacific Street’s amenities include a gym, indoor and outdoor resident lounges, and a children’s playroom. The building sits on 6th Avenue between Dean Street and Pacific Street. There will be over 300 units in the building.

The school makes up part of the 26-story tower within development by Greenland Forest City Partners.

The COOKFOX design team incorporated a small garden between the Church and the new development called “Healing Turtle Island Garden,” which references a reconciliation ceremony between the Collegiate Churches and the indigenous Native American Lenape tribe.

The approved plan allows for the preservation and rehabilitation of 378 West End Avenue, known as West End Plaza, as well as the creation of a new harmonious structure at 260 West 78th Street.
Designed to set a new standard for integrated environmental sustainability, the development will prioritize connections to nature to promote health and well-being. It will include high-performance design to achieve LEED certification.

While appearing as two separate buildings with distinct facades, the 66 residential units, with approximately 9,500 square feet of common amenity space, will be spread across both buildings and exist as one development.

It will replace a 1960s building, known as Platten Hall, which is currently occupied by the Collegiate School.

CBSK Ironstate announced that luxury apartments at the new COOKFOX-designed 301 East 50th Street are now over 70 percent in contract with occupancy slated for the first quarter of 2016.

Douglas Elliman Development Marketing is the exclusive marketing and sales agent for the property.

“The condo sales activity at 301 East 50th Street has been exceptional in a competitive market, which says a lot about the quality of the project,” said Scott Shnay of SK Development.

“The contemporary design, timeless details and energy efficient solutions have received a tremendous response from purchasers.”

There are currently five, two- to three-bedroom units on the market. Each floor of the building has two to three residences. The units feature high ceilings; five-inch plank floors made from solid, tobacco-stained oak; solid-core lacquered doors throughout with Omnia custom hardware; high-performance, multi-zone heating and cooling system; energy-efficient LED light fixtures and Energy Star-rated appliances.
Two penthouses have special elements like private elevator corridors with windows and landscaped terraces. Remaining units at the building start at $2,800,000.

The 22,000 s/f amenity space will also include a library, conference and work/study studios, an entertainment lounge, and multiple game rooms.

Residents will also enjoy over a half acre of a landscaped interior courtyard garden with a greenhouse, as well as a unique rooftop club that includes a heated outdoor pool, lawn, bocce courts, outdoor kitchens, and BBQ’s. The development will also include on-site valet parking.

The residential community will offer a variety of studio, one- and two-bedroom apartments with construction expected to be completed by summer 2017. 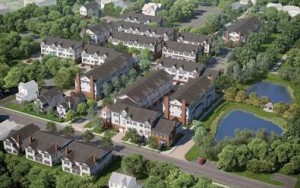 Twelve acres of landscaped grounds create a neighborhood enclave steps from the historic village’s many shops, restaurants, parks and culture.

Douglas Elliman Development Marketing is the exclusive sales and marketing agent for the property.
“Roslyn Landing offers the best of both worlds – the conveniences of walkable, city-like living in a charming suburban village,” said Jason Behfarin, principal, G4 Capital Partners.

“The area’s best restaurants, shopping, entertainment and parks are all just steps away and we have already seen strong interest from buyers looking to live in the center of this Historic Downtown.”
The property’s 12 acres includes a waterfront promenade, village green space, two ponds and access to the village dog run.

Currently available two and three bedroom townhomes range in size from 2,757 square feet – 3,195 square feet and are priced from $1.375 million.

Co-developed by Related Companies and Hudson Companies, Riverwalk Point – the seventh addition to 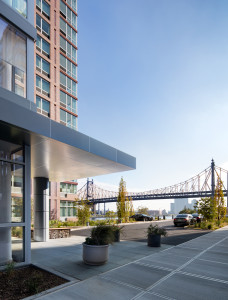 The 22-story LEED Silver-designed building was sustainably designed by Handel Architects and features a collection of 266 studio, junior one-, one- and two-bedroom apartments.

HAVE YOU HEARD: Corcoran agents host more than 100 for breakfast, Muhammad Ali’s former home up for sale