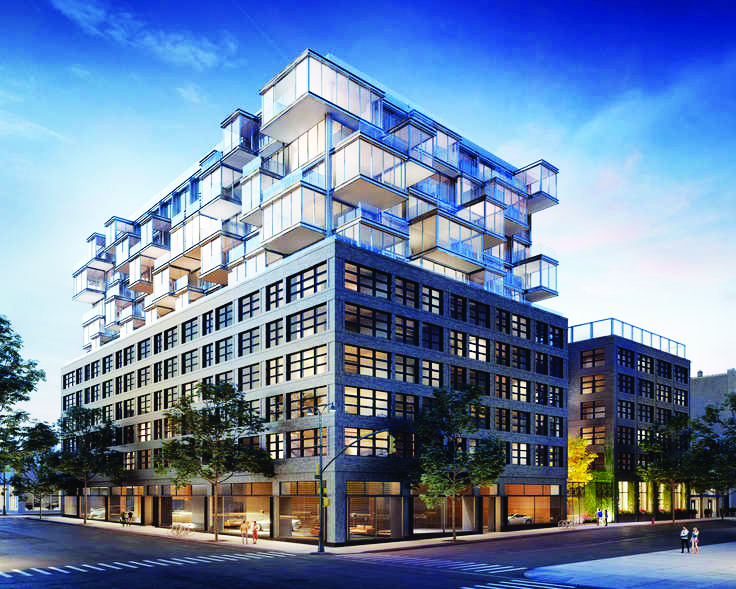 CBSK Ironstate, a partnership between CB Developers, SK Development and Ironstate Development, has recently topped out The West, a new construction condominium in Hell’s Kitchen.

The West is located at 547 West 47th Street on 11th Avenue, between 47th and 48th Streets, blocks away from Hudson Yards and near the Hudson River waterfront. A block-long development, it will rise 12 stories and feature 219 residences, which will include studios to three-bedrooms.

Residents are expected to move in next year. Sales will launch Spring 2020 and will be exclusively handled by The Marketing Directors.

Concrete, the critically acclaimed design firm, is responsible for the architecture and interior design. The West is the Dutch-based firm’s first condominium development in New York City. Concrete has designed high-profile projects around the world including the first Virgin Cruise Ship, the CitizenM hotels in NY, London and Amsterdam, as well as the Urby residential developments in Staten Island and Jersey City which are also developed by Ironstate.

Concrete’s design for The West’s exterior is meant to evoke the neighborhood’s industrial past with large volumes at street level, window walls, and a façade comprised of Dutch made bricks. The upper area of the building, known as The Cloud, is comprised of a completely glass facade. It crowns The West’s top five stories and features the building’s most spacious residences, many with outdoor terraces.
The West has 25,000 s/f of amenities. This includes two guest suites that residents can book for visitors, a communal kitchen named Hell’s Kitchen, a rooftop pool deck, gym, dog run, children’s playroom and other areas.

● The Daten Group
Renderings out for Clinton Hill rental

The Daten Group has released renderings for its planned nine-story, 135-unit mixed-use rental building at 540 Waverly Avenue in Clinton Hill, Brooklyn at the intersection of Atlantic and Waverly Avenues.

The developer purchased the site located just outside the Pacific Park redevelopment area from Verizon New York for $17.25 million in December, 2019. According to the developer, Verizon retained a building on the site while selling its underutilized parking lot and storage buildings. It is expected that Verizon will continue to use its portion of the property as a central office.

The proposed 95-foot-tall development totals 117,000 s/f with 91,900 s/f of residential space. The project will contain 40 affordable apartments, as part of the Affordable New York and Voluntary Inclusionary Housing programs. The remaining 95 apartments will be market rate and the building will include amenities.

The Daten Group has hired Daniel Bernstein of Kutnicki Bernstein Architects as the architect of record for the new building. Construction for 540 Waverly is scheduled to commence in the spring of 2020 with an anticipated completion date of mid-2022.

SL Green has provided $58.5 million in financing towards the project.

The Pierrepont, a residential rental building in Brooklyn Heights, has reached an 80 percent leased milestone. The two, 20-story towers are comprised of 90 apartment homes with one, two and three-bedroom floor plans ranging from approximately 900 to 1,800 s/f, with prices starting at $5,800 per month.

Additionally, The Pierrepont, located at 146 Pierrepont Street between Clinton and Montague, will soon release a new collection of penthouses. Each will offer one unit per floor with a private corridor and dedicated storage.

Completed in October 2019, leasing at Pierrepont began in February 2019, and is being handled by The Bloomstone Group at Halstead.

2-22 51st Street, also known as The Borden, is a new rental building with leasing being handled by REAL New York. Unit sizes range from studios to two-bedrooms and The Borden offers flexible lease lengths from 1-2 years with rents ranging from $2,750 to $3,200.

The five-story building offers amenities include a virtual doorman, laundry room, and a rooftop lounge. The Borden is a few blocks from the East River Ferry, and the 7, G, E, M, R subway lines.

The model units on the fourth floor and one on the seventh floor.

32 East 1st Street features one to three-bedroom residences designed by Combined Architecture and Interiors. Based on current online listings, units, not including the penthouse, range from $1,375,000 for a 484 s/f one-bedroom to $3,625,000 for a 1,497 s/f three-bedroom, 3-bath home.

32 East 1st Street’s amenities include a gym with Peloton bikes, spa and lounge areas with hot tubs, sauna, steam room, and a plunge tub. The outdoor terrace has an abutting lounge area.