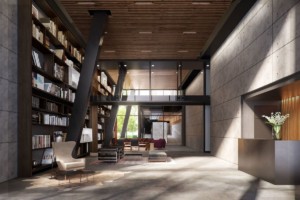 Designed by ODA Architecture, with interiors by Andres Escobar, the property will feature 123 condominium residences ranging from studios to four-bedroom homes, including penthouses with terraces.
The amenities at Charlie West will include an industrial-chic lobby (pictured) that also serves as a curated library and private lounge with a fireplace, a double-height indoor pool and children’s playroom that open to respective outdoor terraces and the building’s center courtyard, a two-story fitness center, as well as a glass-enclosed bike box.
Cantor-Pecorella is the exclusive sales and marketing firm for Charlie West. Sales are expected to launch in June 2017, with closings estimated to begin late 2018.

Elad Group and Silverstein Properties have tapped Douglas Elliman Development Marketing to lead sales for One West End’s tower residences.
The 42-story condominium, located at the corner of 59th Street and West End Avenue, is comprised of 246 residences ranging from one- to four-bedroom homes.
It is the tallest condo within the rising new neighborhood of Riverside Center, the masterplan development providing 3.2 acres of green space and a new K-8 public school. 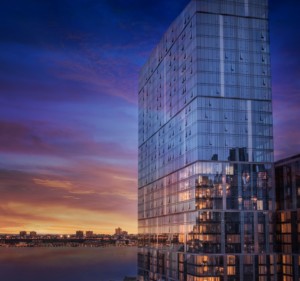 Douglas Elliman’s Eklund Gomes Team led by Fredrik Eklund, s and John Gomes will be leading sales for the project.
“This is a defining project for Manhattan’s West Side, and one that is now reaching a major milestone as we near completion of construction, which is expected later this year,” said Gomes.
“Even sooner, we will be unveiling the building’s first model residence, which is slated to debut in just a few weeks.”
Remaining residences at One West End, which are priced from $2.7 to over $20 million and range from two to four bedroom homes, also include one penthouse and two duplex tower residences with setback terraces.

A nearly-completed 45-story residential tower in downtown Jersey City now has a name and a launch timeline. 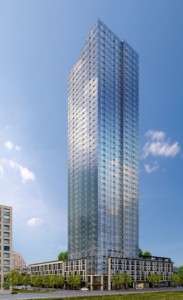 Fisher Development Associates has chosen the name Vantage for its new glass curtain wall building and announced a late spring opening for the property’s 448 rental residences.
The Marketing Directors will oversee the building’s leasing program.
Located at 33 Park View Avenue adjacent to Jersey City’s Paulus Hook and Van Vorst neighborhoods, Vantage features studio, one- and two-bedroom residences with floor-to-ceiling glass windows and views of the Hudson River, Manhattan skyline and the Statue of Liberty.
A suite of indoor and outdoor social and recreational amenities includes an outdoor zero entry swimming pool and a cyber café. Homes are expected to be initially priced from $2,115. 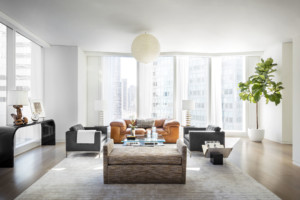 A full floor has been dedicated to showcase the building, comprising a two bedroom, two-and-a-half bath residence and an alcove loft studio within the 63-story tower designed by New York-based architect William T. Georgis.
Georgis, who in this year’s Architectural Digest AD100 was ranked amongst the design world’s geniuses of color, used a color palette of bronzes that pays homage to the mid-century landmark and comes to life in the form of bronze detailing found throughout the Foster + Partners-designed kitchens with wire brushed oak cabinetry, honed Italian Carrara marble countertops, and integrated Gaggenau appliances.
In master bathrooms, Silver Striato travertine countertops and flooring complement low-iron glass shower and water closet enclosures with bronze pulls.
The building’s amenities will include a 60-foot swimming pool, a wellness center, spa, yoga and pilates rooms, library and resident lounges. Chef Joel Robuchon will helm a casual and fine dining restaurant spanning the first two levels designed by French architect Joseph Dirand.
Prices will start at $2,250,000.