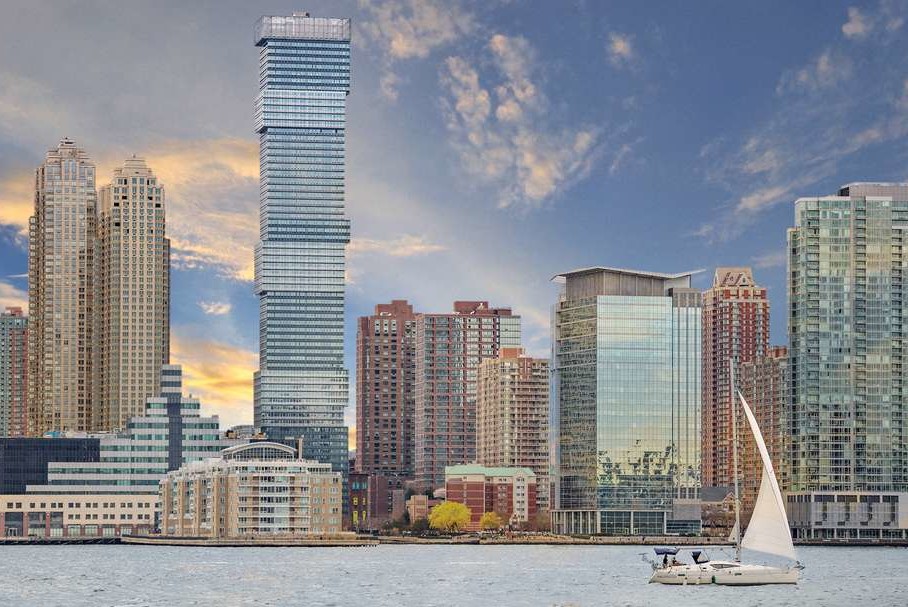 Jersey City’s tallest apartment tower is proving to be a hit with renters.

Roseland, a subsidiary of Mack-Cali, just reported that the firm is leasing close to 140 units per month and achieved 38 percent leased on 286 units in the two months since the tower opened.

The cantilevered 69-story tower co-developed by Ironstate Development and Roseland is located at 200 Greene St. and stands 713 feet tall.
Studio and one- and two-bedroom apartments range from $2,000 to $3,400 and occupancy is now underway.

The leasing surge was announced during what Mack-Cali called a quarter of “significantˮ achievements. The REIT reported that Roseland’s stabilized portfolio at quarter-end was 97.5 percent leased as compared to 96.1 percent leased at year end 2016.

Roseland acquired its partners’ interest in Plaza 8 & 9, thereby converting this premier waterfront development site from 50 percent to 100 percent ownership. This site could contain up to 2,000 units and is directly adjacent to Urby. Roseland also acquired Monaco, a 523-unit luxury community along the Jersey City waterfront.

“Over the past year, we have put into service M2 at 311 units in May of 2016 and Urby at 762 units in March of 2017,” said DeMarco.
“In that one year time frame we have significantly reduced concessions during lease up and increased rent at M2 five times. We absorbed that project at 50 units per month stabilizing in just six months. Now, Urby is averaging close to 140 units per month and achieved 38 percent leased on 286 units in just two months. We have raised rents three times so far at Urby and are averaging over $55 per square foot.

“This leasing activity is balanced out by our operating portfolio at Marbella and Monaco’s combined 935 units achieving an average leasing percentage over the last year of 96.8 percent amidst the adjacent M2 and Urby lease-ups. We strongly believe that the Hudson River Waterfront/ Jersey City will continue to absorb the remaining inventory and deliveries for 2017.”

Jersey City Urby is the second of a planned series of Urby developments. The first Urby opened in 2016 in Staten Island and a new location will open later this year in Harrison, officials said.

As it continues to streamline its previously office-heavy portfolio to focus on the multifamily market, Mack-Cali is currently marketing for sale some $600 million of commercial office assets.

Mack-Cali owns virtually 100 percent of the class A office market in Short Hills, where the rents are the highest in the state, and acquired a value-add opportunity in the Giralda Farms campus to reposition high-quality assets.

“As a result of further refining our office portfolio and the acquisition and new development of multi-family, we are better positioned to focus on our high-growth markets. We believe we are well on our way to owning a totally class A, well-positioned portfolio giving us greater cash flow through all cycles,ˮ said DeMarco.

Urby, which is located at 200 Greene Street, will be officially unveiled next Tuesday (May 23) by David Barry, president of Ironstate Development, and Erikjan Vermeulen, head of architecture for Concrete. Jersey City Urby’s Scientist-in-Residence, Paul Hoffman, CEO of Liberty Science Center, will also be in attendance.
(Visited 1 times, 1 visits today)