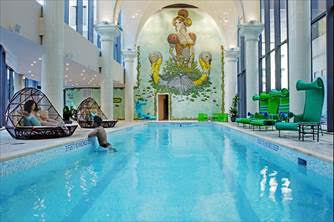 After five years of design and construction, All Year Management has completed Denizen Bushwick, a 1.2 million s/f development, featuring 911 apartments. Of those units, 20 percent are affordable, and the property also includes murals, 100,000 s/f of outdoor space and assorted amenities.

ODA designed the entire development, architecture, interiors and landscape design. Leasing is being handled by EXR.

Denizen’s communal spaces and courtyards are bisected by a 17,850 s/f public park that creates a green promenade between the two sites, equivalent to two city blocks. ODA’s landscape team designed the park, interior courtyards, and two roof gardens. Designed to draw residents outside, rooftop amenities include a dining area with four kitchens, a mini-golf course, a hammock garden surrounded by a meadow, a dog park, and a fully staffed garden. The roof’s long leafy paths and secret secluded spaces are home to more than 250 native New York tree species, and over 1,200 species of shrubs and perennials.

This year, the Denizen rooftop farm will have garden plots available to residents to grow their own food from a selection of over 100 different seeds.

Corcoran New Development has been named co-exclusive sales and marketing agent – along with Exit Dynasty Realty – for Star Tower, located at 27-17 42nd Road in the Queens Plaza section of Long Island City.

Located one subway stop from midtown, the 182-unit condominium rises 27 stories and will provide residents panoramic views of the Manhattan skyline. Built by Eastern Star Development, one-bedroom homes are priced from the mid-$800,000s, and two-bedrooms start at approximately $1.4 million.

Spanning nearly 13,000 s/f the building’s amenities center is among L.I.C.’s largest.  It includes a 27th floor SkyDeck, a landscaped rooftop sun terrace, and residents’ lounge with billiard table. Other amenities including a fitness center, playground, zen garden, and media/theater lounge will also be available for use. The building also offers on-site automated parking and an attended lobby.

With a 15-year tax abatement and common charges of approximately $0.75 per foot, the building is already a quarter sold.  The offering plan has been declared effective, which sets the stage for Spring 2020 closings, making it one of the only new L.I.C. condominium towers ready for occupancy in the coming months.

More than 70 percent of the building’s 421 units having sweeping views of the East River and Manhattan skyline. The building was developed in a joint venture between Brookfield Properties and Park Tower Group, the master planner for Greenpoint Landing.

Designed by Handel Architects, the property includes a combination of brick, metal and glass anchoring the podium, visually tying it together with the neighboring buildings.

Amenities include a pool club with a private bar, lounge, reservable cabanas, and views of the Manhattan skyline, a two-story fitness center and spin studio, a landscaped outdoor deck with tables and chairs, grill stations, and wet bars and a lounge with a fireplace. There’s also Latch keyless entry and home management systems, and residents get free rides to transit hubs with Via.

Two Blue Slip features 421 units, including 12 penthouse apartments with private outdoor spaces, and 30 percent of the units are income-targeted through the Affordable New York program and will be leased up via the City of New York’s Housing Connect lottery system.

Greenpoint Landing is a 22-acre site situated along a half-mile of East River waterfront, being developed by master developer Park Tower Group. In its entirety, Greenpoint Landing will include an estimated 5,500 residential units – approximately 1,400 of which are affordable housing – as well as a new pre-k through 8th grade public school and four acres of public open space.

The first building, One Blue Slip, opened in August 2018, along with 1.1 acres of public waterfront open space. One Blue Slip features 359 units and is fully leased.

Construction has also started on the next phase of development at Greenpoint Landing, including acres of additional public waterfront open space designed by James Corner Field Operations and three new towers.

175-192 Spencer, a revamped six-story, 82-unit condo in Bedford Stuyvesant, has launched sales.
Sales and marketing are being handled by MNS and the developer is Black Spruce.

With a mix of one and two-bedroom units, 175-192 Spencer offer a variety of layouts, with multiple duplexes on the first floor. Homes feature wide plank hardwood floors, exposed concrete ceilings, oversized windows and Bosch washer and dryers. In addition to a smartphone intercom system, technology within each home include Nest Thermostats and USB outlets.

Amenities at 175-192 Spencer include a fully equipped fitness center, a furnished roof deck with a barbeque, on-site parking, bicycle storage and private storage.

The Weingarten Group has announced that the sales gallery is now open at Prior’s Pointe, its newest 16-unit condominium development, in Downtown Jersey City’s Village West neighborhood. Exclusively marketed by Irina Barnaby and Daniel Pelosi with Weichert, Realtors, buyers also now have the opportunity to walk through the homes on hardhat tours, to see the actual spaces.

Prior’s Pointe is comprised of two-bedroom, two-bath homes ranging from approximately 1,100 to over 1,300 sqs/f. Custom-stained, white oak plank flooring and sound dampening underneath every home. Central air and heat are easily controlled with a Nest thermostat, and every unit has premium laundry appliances, including a vented gas dryer.
Residences at Prior’s Pointe start at $799,000, with some units offering views of Mary Benson Park.