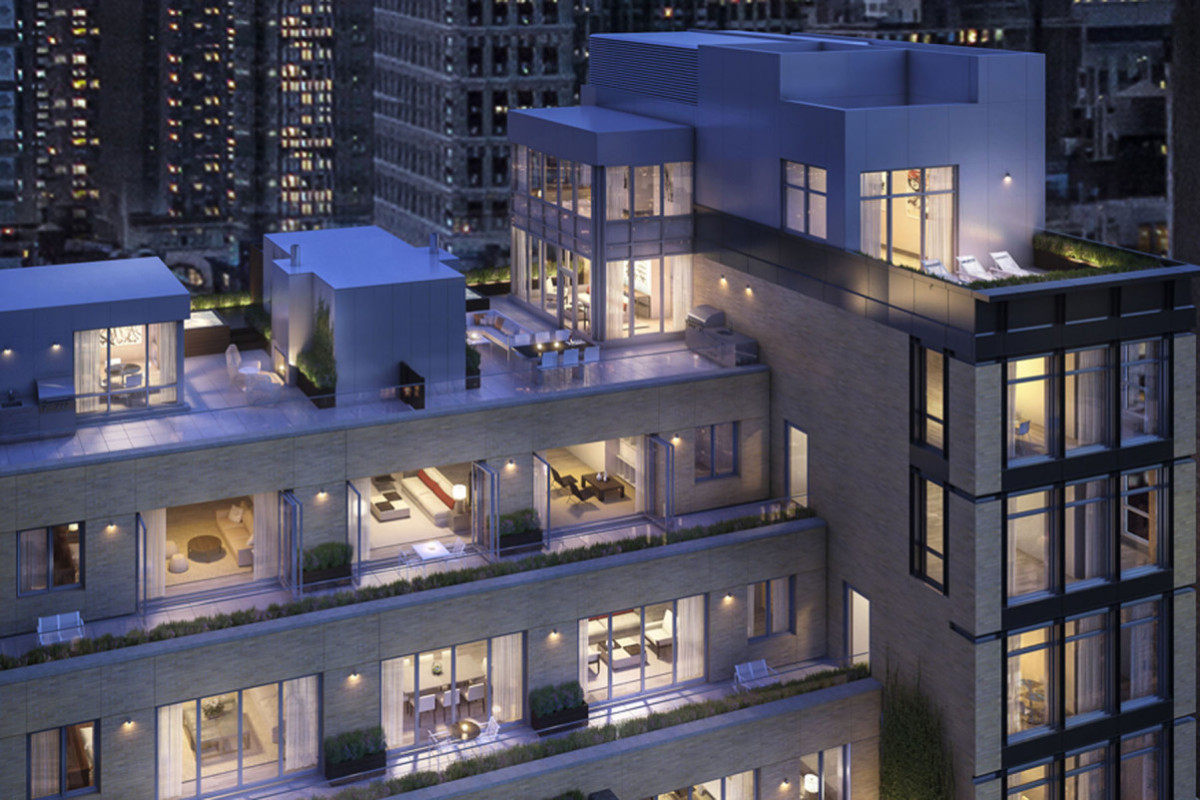 The new luxury residential building in the Flatiron District, 21W20 has announced the release of pricing for two full floor, floor-through residences.

The homes are designed by interior architect David Mann of MR Architecture + Décor.

Located just off Fifth Avenue, the new Beyer Blinder Belle designed 21W20, developed by Gale International, features a glass, cast iron and stone façade that rises from the street to the tenth floor.

On the eleventh floor, the building unfolds to its full 100 ft width to reveal floor-through penthouse homes perched atop a restored, landmark-protected structure.

“The layouts of these two homes are spacious and open yet clearly defined by thoughtfully planned interior architecture. The residences, which boast an ultra sophisticated tone-on-tone palette, are designed to take advantage of the extraordinary light available through the South facing windows,” said Stan Gale, chairman of Gale International added, “21W20 provides everything a Manhattan homeowner desires – a private, yet extraordinary location which is at the nexus of Downtown’s vibrancy and Uptown’s sophistication. The new residential building, 21W20, features beautifully designed residences with open floor plans, and state-of-the art appliances, services and amenities.”

Located at 456 West 167th Street, the Washington Heights building has been developed by Gleam Realty Inc.
“As the exclusive sales and marketing agents for the development, we have had the privilege of selling residents their

“Washington Heights offers a taste of the old New York that formed its global appeal and maintains a new reputation as one of Manhattan’s most historic as well as most revived neighborhoods.ˮ

Edgecombe Parc residences started at $340,000 to approximately $1 million for one-bedrooms to three-bedrooms. Homes range from 500 to 1,170 s/f.

Corcoran Sunshine Marketing Group announced that more than half of the condos are under contract at Halcyon, an apartment building under development by HFZ Capital Group and its equity partner, CIM Group, at 305 East 51st Street.

On the heels of the strong sales momentum at Halcyon, the sponsor has unveiled a penthouse: a 3,563 s/f four-bedroom, four and one half-bathroom duplex with three private terraces with 1,365 s/f of outdoor space.
The residence is located on the building’s 32nd and 33rd floors and is priced at $11,750,000.

Architecture and interior design firm S. Russell Groves, recently named to Architectural Digest’s AD100 list of the top 100 in the field, are responsible for the aesthetic.

Principal Russell Groves, said “This penthouse is a chic, contemporary townhouse in the sky and includes an expansive gathering room with a wood burning fireplace and separate wet bar, along with an adjacent terrace for entertaining. Details and appointments include a sculptural balustrade and sensuous marble hearth.”

Halcyon will feature a total of 123 one- to four-bedroom luxury condominium residences and over 10,000 s/f of amenities on the building’s 21st and 22nd floors, which will include a 52 ft. indoor swimming pool, a health and fitness center with a Movement Studio, sauna, Aqua Spa and a spa treatment room.

Designed by SLCE Architects, the building has a glass and bronze window wall tower and limestone base.
● SILK LOFTS LLC
Factory plan working out

Leasing is about to get underway at Silk Lofts, a collection of 85 loft residences transforming the former Maidenform factory in the Hudson County, NJ, City of Bayonne.

A Priority List is currently forming for the initial phase of studio, one-, and two-bedroom homes which are expected be released to the public in early April, with initial occupancy scheduled for May, according to Silk Lofts, LLC.

The developer is transforming the century-old factory where the modern bra originated and where military parachutes and carrier pigeon vests were manufactured during WWII into a series of loft apartments.

The homes will offer modern living spaces and amenities while retaining dramatic original structural elements. Two model homes will be available for viewing in late March.

The collection of three interconnected, five-story buildings is located at the intersection of 18th Street and Avenue E — 800 ft. from the 22nd Street Light Rail station.

A fourth building overlooking an interior courtyard will feature a limited offering of Artist lofts.

Monthly rental rates will begin from $1,500.

“The Maidenform factory has been an iconic building in Bayonne for over 100 years, and we’ve taken great care to maintain the history and charm of the property,” said Doug Stern, President of Silk Lofts, LLC.

“Utilizing extensive research on its origins and a creative approach to development and historic preservation, we’ve created an urban residential living experience that rivals similarly-inspired residences in areas like Brooklyn at a price point that offers considerable consumer value.”

A suite of amenities has been designed for Silk Lofts includes a “pocket parkˮ with a herb garden, barbecue, fire pit and pizza oven. There will also be an on-site fitness center, secured parking and a lobby with historic photos of the original Maidenform factory.

A tale of two halves in tony Tribeca