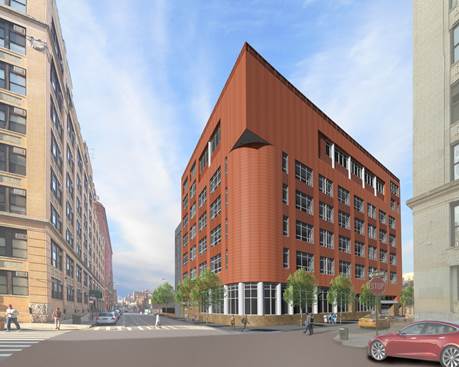 Navillus Contracting has been awarded the contract for masonry at IS323, a new seven-story, Intermediate Public School located at 75 Morton Street in Lower Manhattan.

The new school is being constructed on the site of a former 100-year-old hospital, and developed by the New York City School Construction Authority (SCA).

The project calls for Navillus to install 36,000 s/fof a state-of-the art terracotta rainscreen facade, 2,400 square feet of a granite base, and 60,000 s/f of interior CMU.

Navillus will be working alongside general contractor, Leon D. DeMatteis Construction Corp., to complete this project.
This is one of the first times the three-part Terracotta Rainscreen System — which includes masonry backup, aluminum framework, and the terracotta rainscreen tile — will be used in a New York City public school.

The new system was initiated by SCA design consultant, John Ciardullo, P.C., and supplied and manufactured by NBK Germany.
The terracotta rainscreen system offers a blend of traditional looking facade finish with modern installation techniques. Due to terracotta’s durability, the system offers very low need for continuing maintenance over the building’s lifetime.
“We are excited to help build this new public school and install the terracotta rainscreen system, which will be the first time this innovative system has been employed in a New York City public school,” said Donal O’Suillivan, owner and president of Navillus Contracting.

“This terracotta system — cost efficient, easy to install, and aesthetically pleasing — is becoming more and more popular as a replacement for traditional brickwork and modern curtain walling. We anticipate that this process will eventually become the norm.”

Navillus Contracting began work in August 2016, with all components of the old building demolished except for the substructure and superstructure, which will remain and be incorporated into the new school building with the new facade and interior fit-out.

Construction on the new school — located between Greenwich Street and Hudson Street — will be completed for occupancy by fall of 2018. Ciardullo is the project architect.