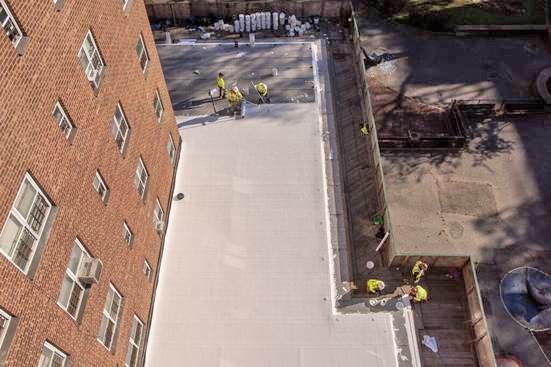 Navillus has been a leading contractor for resiliency and Sandy recovery projects for private and public sector clients.

In early 2019, Navillus will have completed an approximately two-and-a-half-year project at the Ocean Bay Apartments (Oceanside) in Far Rockaway to remove and demolish existing finish and electrical equipment, install new emergency generators and construct and install new flood mitigation walls and servicer feeders, among other improvements.

“We are proud to be working with NYCHA, in support of local residents, by supplying superior construction and resiliency work on numerous public housing developments across the city,” said Donal O’Sullivan, owner and president of Navillus Contracting. “These projects have brought critical, state-of-the-art technologies and structural improvements to current and future residents.”

Navillus is also currently working with NYCHA to complete a wide range of assignments at public housing developments across Queens, Manhattan and the Bronx.

These projects build on the firm’s more than 20 years’ experience working with the City at these developments.

Deborah Goddard, Executive Vice President for Capital Projects at NYCHA said, “Six years since Superstorm Sandy, NYCHA remains committed to our communities as we undertake the country’s largest residential recovery and resiliency program. Our work with committed partners like Navillus ensures our residents’ homes will be safe and resilient in the face of future storms.”

In addition to the Ocean Bay Apartments (Oceanside), Navillus is currently engaged in a 5-building project at the nearby Redfern Houses in Far Rockway, installing new electrical, roof replacements, lighting upgrades and other services.

The company also recently completed a roof and façade project at Parkside Houses in the Bronx, where all 14 buildings received new roofs.

Navillus has long been active and committed to the Rockaways. Following Hurricane Sandy, Navillus mobilized approximately 150 volunteers and supplies to help clear debris and evacuate more than 300 families from the area.

Navillus set up a command center in the St. Francis de Sales Church parking lot where volunteers set up warming tents and trailers, and distributed food and water to hundreds for 12 -15 hours per day in the months following the storm.

Proving their commitment to the Rockaways, Navillus strives to hire local NYCHA residents wherever possible, and continues to support the community through various local sponsorships.

Knotel powering into New Year with 80,000 s/f in deals