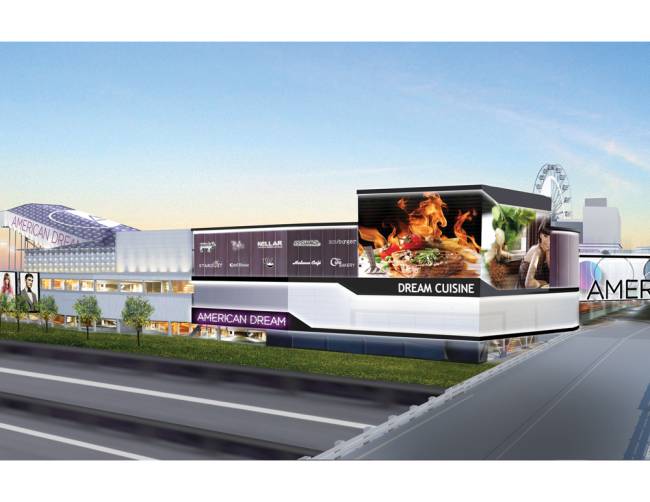 New Jersey’s American Dream is still on its way to coming true.

The mega-mall entertainment and shopping complex known as American Dream at the Meadowlands in East Rutherford, NJ, is making progress and still anticipating a Fall 2016 opening.

The infamous façade of the building, visible from the New Jersey Turnpike, which NJ governor Chris Christie famously referred to as “the ugliest mall in New Jersey, and maybe America” will soon look much different.

“It is in the process of being changed right now,” said Alan Marcus, a spokesperson for American Dream developer, Triple Five. “There’s a great deal of work going on inside the building as well as on the side of the waterpark and the amusement park.”

Triple Five has been tight-lipped about retailers that have signed with the mall, and would not comment on any aspect of lease negotiations, including rents.

The did say, however, that there has been an “incredible amount of interest” in the entertainment and retail sectors.

“There was a meeting where someone said, ‘Where are we going to fit everyone?’” said Marcus. “It’s very exciting. I’m shocked by the amount of interest.”

The $2 billion years-in-the-making mega-complex is being developed by the family-owned development firm responsible for the Mall of America in Minnesota, and West Edmonton Mall in Canada, which have been open for 20 and 30 years, respectively.
reveal their names.

The demand for retail space at the mall was so high that developers added more retail space to the project, said Ghermezian.

American Dream is slated to have nearly 1.7 million s/f of retail space, 1.1 million s/f of attractions and 150,000 s/f of fine dining and restaurants. Main attractions will include a 639,000 s/f amusement park and waterpark, the world’s tallest “drop ride,” an observation wheel with views of Manhattan, an aquarium, an indoor ski slope and ice rinks, a miniature golf course, a performing arts center, and 400 stores and restaurants.

Ghermezian and his team at Triple Five are spearheading the leasing for American Dream and working with “outside consultantsˮ that include Sinvin, Cushman and Wakefield and RKF.

It has been rumored that brokers and retailers working on American Dream leases have been obliged to sign secrecy clauses that will allow the developer alone to announce any openings.

Developers are projecting 40 million annual visitors to the mega-shopping and entertainment center once it is finally up and running, and the project is expected to generate more than 9,000 jobs, according to Rick Sabato, head of the Bergen County Building and Construction Trades Council.

Triple Five took over what was previously called the Xanadu project in 2010 and workers finally returned to the site this summer after signing a Project Labor Agreement in April.

Until the mall developer took over, the project had fumbled its way through three governors and $2 billion before stalling in 2009.