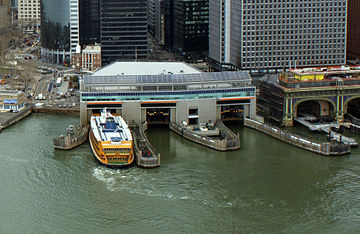 Agency officials and members of the de Blasio Administration gathered at the Whitehall Terminal of the Staten Island Ferry to urge the Governor to sign the NYC Design-Build Act.

According to supporters, the legislation would save the city $300 million on 49 projects — including the Staten Island Ferry — by expediting the construction of public infrastructure such as libraries, bridges, firehouses and schools.

“Throughout our City, we have serious infrastructure needs that cannot wait for a crisis. It is critical we address these issues right away and in the most cost-effective way possible,” said Mayor Bill de Blasio.

“Design-build authority would save us time and money, meaning less red tape and more libraries, roads, and bridges in communities across our city. Design Build has been invaluable for the State, it can and should be for the City too.”

If enacted, supporters say the legislation would accelerate roof and boiler repairs for NYCHA residents, expedite the opening of libraries, parks buildings and schools, reduce traffic by enabling the City to complete road, water and sewer projects faster.

City agencies have identified 49 projects which could benefit from the design-build method, including:

Reconstruction of Belt Parkway Bridges: NYC DOT will reconstruct a series of bridges on the Belt Parkway at Sheepshead Bay Road, Ocean Avenue, Bedford Avenue and Nostrand Avenue. The project is estimated to cost up to $155 million, and design-build may save more than $9 million while also expediting completion of the project.

NYPD Property Clerk Facility: DDC will construct a modern replacement for the outdated, undersized and environmentally vulnerable evidence storage facilities currently spread out along various sites throughout the boroughs of NYC. This project is expected to cost more than $423 million if built according to the design-bid-build system; design-build could save more than $8 million, but also help ensure that this project’s’ various technological components are well-integrated.

Staten Island Ferry Resiliency Upgrades: Superstorm Sandy caused significant damage to the passenger terminal and ferry maintenance facilities in Staten Island and Manhattan. The City made temporary repairs, but permanent resiliency measures are required to protect these facilities from storm surge flooding, high winds and rising sea levels. Design-build is projected to save $3 million from the project’s $57 million estimated cost, but could also prevent construction from disrupting the 24/7 operation of the Ferry for the tens of thousands of daily passengers.

“Signing the NYC Design-Build Act into law will enable New York City to complete projects quicker, more often under budget, and cut through red tape that has often blocked us from putting together the best design and construction teams,” said Deputy Mayor Laura Anglin.

“We have seen the positive results design-build can yield not only across the country, but throughout New York State, which is why we need to bring this authority to New York City.”