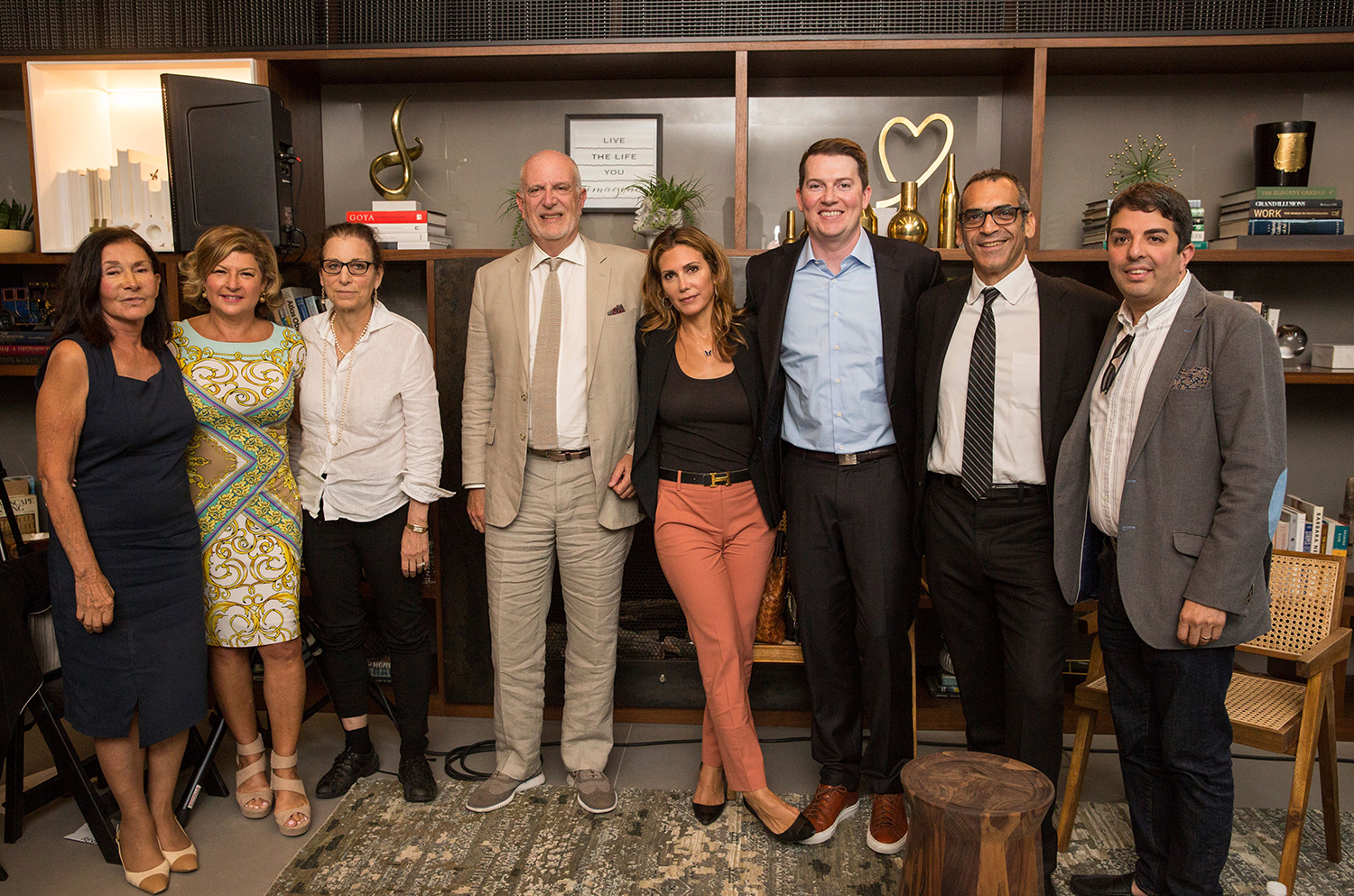 By Sabina Mollot
In the midst of a market in which brokers are facing declining interest from foreign investors, sales are being snarled by new taxes and home buyers can now shop on Amazon, the takeaway from a recent panel with leaders in real estate is that the market is “schizophrenic.”

Residential brokerage CEOs and veteran brokers spoke about how the industry fluctuates “without rhyme or reason,” as Jacky Teplitzky of Douglas Elliman put it at the “State of the City” panel. The event, which was moderated by Shlomi Reuveni, CEO and president of Reuveni Real Estate, took place at the new Charlie West development on West 43rd Street.

The aforementioned panelists expressed mixed views when airing out their feelings on how the first half of 2019 has gone.

The first to respond was Peters, who reported, “The first quarter sucked.” The second quarter was better, he said, thanks to a spike of buyers racing to buy in June in order to avoid the mansion tax that was implemented in July.

Olshan also saw triple the amount of sales in June as she’d normally see in that month, adding she thought this obvious avoidance of the mansion tax created a false positive in the market. At this time she believes homes must be priced to move and that means offering a nine percent discount before it even hits the market.

“You have to come down nine percent and then negotiate from there,” Olshan advised.

Benaim, who focuses on Long Island City properties, reported his market was a healthy one, ironically having been put on the map by Amazon’s aborted plan to build its headquarters there.

“Since they left we’ve still been busy,” he said, although he noted landlords couldn’t price units as high as they’d hoped when it was expected that many of the e-commerce giant’s employees would be moving to the area. “We’re in a bit of a bubble, but we’re still seeing more first and second time home buyers” with sales averaging $1.2-1.3 million, he said.

Meanwhile, Packes predicted that over the rest of the year, rents would continue to climb as they have been doing as long as the employment rate does the same. This is because a “glut of product” built a few years ago when developers feared the 421-a tax program was coming to an end, is close to being filled.

“Concessions will continue to come down and prices will continue to go up, because of the lack of supply,” she said. The lowered supply would also be due to a lack of owners interested in renovating old stock since the new rent laws went into effect in June limiting how much owners can raise rents. However, this will also lead to less turnover due to fewer incentives for renters to vacate, with means less inventory for brokers to work with.

Olshan said she was less optimistic about the rest of the year based on her view that there is still too much overpriced stock. “Too often developers are in another world,” she said. “They are looking into projections that are not achievable.”

Blackmon agreed, saying the market is oversaturated with developments where “sellers need to get real about value.”

Teplitzky, when speaking about the mercurial nature of the market, said the most important thing is to determine just what fair market value is and knowing when to make a price cut — or even several.

When asked by Reuveni if buyers were flocking towards re-sales or new development, Peters mentioned how the townhouse market is especially slow.

Olshan suspects a reason for this is that buyers no longer want to invest in renovations, as the costs of doing so could potentially add 25 percent to the cost of a home. “Townhouse renovations are really hard. It can be a multi-year renovation and people run out of gas,” she said.

Freedman, meanwhile, said townhouses still have appeal at the right price. “If you price it low it’s going to sell,” she said.
But Peters said price wasn’t the only factor.

“Clearly you’re not going to sell it if it’s not priced right, but there is less of an appetite for houses than at any point in my career,” he said. Peters attributed this to the quality of new co-op and condos with amenities that are making buyers feeling they’re getting the best deal for their money. “If you can tolerate the B.S. in selling co-ops, which increasingly people are not willing to do, that is the place to go for value,” Peters said.

He added, “I never imagined 40 years ago when I came into this business that the place to go for cheap living would be the Upper East Side.”

Freedman and Teplitzky said they’d observed the same thing, with people who grew up in that neighborhood not wanting to remain there.

“Now people are going there to find value,” Freedman said, “It’s the state of the schizophrenic buyers.”

Teplitzky added, “There’s so much inventory on Park and Fifth, so many price reductions. It used to be that you had to beg for an appointment (to see an apartment). Now they beg you to come for an appointment. The demographics have completely changed.”

At one point, Reuveni brought up situations where developers don’t have the luxury of lowering prices because they may have already been set by their capital partners. He added that he’s been in the business since 1986, “and I’ve never seen a market like this.” He added, “I’ve seen the worst of it. In 2009, people were committing suicide because they lost everything they had, but this is as surreal as it gets.” His feelings were based on the stock market, which is doing well, while at the same time people are hesitant to buy.

Teplitzky said she believes this is because buyers know they have many options — “they read the papers.” This means, she added, “They take their sweet time but they are buying.”

The impact of technology on the business was also discussed, in particular the fact that consumers now have easy access to listings online, information that was once held solely by brokerages.

“Just knowing the market isn’t enough,” said Peters. “Buyers and sellers can go online and see every listing and that has obligated us to go from being gate keeper to information to being providers of expert advice.” Peters added that he prefers to be the latter.

Freedman said she thought that technology has empowered brokers to maintain relationships, which she said, “is the most important thing we do and that is something that has not changed and will never change.”
Peters agreed, saying relationships, along with having the voice of experience, and being able to use technology to further relationships, is what will keep brokers from getting replaced by technology.

Teplitzky was less confident about this though.

“I wish I was as positive as Beth and Frederick, but reality tells us differently,” she said. “It used to be a business of relationships and loyalty. They’d come back to you in five years but we now have buyers and sellers who think they know much more than us and do not see the value in our positions.”

She added that with other changes in the industry, including the fact that agents are now buying leads, brokerages must accept the shifts in consumer attitudes.

“If firms don’t get the message, they’re going to stay behind,” said Teplitzky. “It’s no longer about a brand. Sellers want value and we are not supplying that fast enough.”
Olshan said she’s also noticed traditional firms being loath to change. “Unfortunately, because you were successful for a long time you hang on to dysfunctional aspects of your culture.” She added that with agents being independent contractors, it’s up to each one to evolve to meet customers’ needs.

“If you want to operate in this environment, it’s up to you to get as skilled as possible and many brokers just have a hard time with email,” she said. “Brokers have to make sure they’re efficient, but some agents don’t know how to go on the Department of Buildings website to see if there are permits.”

Olshan also had some concerns about the impact of tech on the industry, giving an example of TurnKey, Amazon’s new real estate venture with Realogy. “That is letting the fox in the henhouse,” she said.

Amazon’s renewed interest in New York was also brought up with Olshan saying – without revealing who told her — that the company would indeed return to Long Island City, Queens and to other boroughs. She added it’s not for the real estate, but to tap into the city’s tech talent pool. “They may not be getting tax breaks but they have to come to New York City. Silicon Valley has aged out. New York City is transforming. We’re becoming a tech town.”

Amazon has been rumored in recent weeks to be looking around for office space in Brooklyn’s Industry City, in Manhattan and Long Island City. LIC, Reuveni pointed out, is now the fasting growing neighborhood in the country.

The event concluded with panelists suggesting that real estate professionals get involved politically if they want to help the industry.

“I think everyone should get more involved, especially in primaries,” said Benaim. “A lot of New Yorkers are Libertarians or Independents, so they can’t vote in the primaries. If you’re a Republican, register as a Democrat because you can vote in the primary, which is extremely important.”

Peters mentioned how hundreds of agents flexed their political muscle earlier this summer at a City Hall protest against legislation aimed at capping the amount of commission a rental broker can collect from a tenant at one month’s rent if the broker was hired by the landlord. The agent could still charge more than that but the landlord would be responsible for paying the rest. The City Council chamber, Peters recalled, was packed with industry professionals who were against the bill. “Exactly where it will end up isn’t clear,” said Peters, “but these mobilizations are only as successful as the people who respond.”