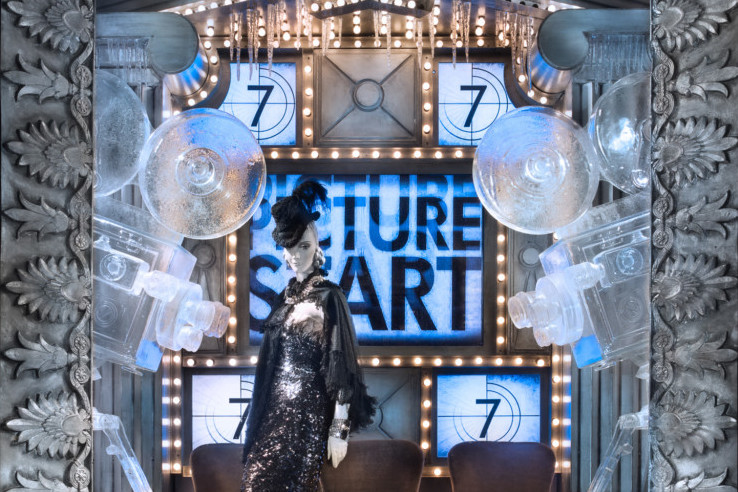 Look around: the cheer is here and the streets are adorned with the jewels of the season.
The ultra-festive tradition of holiday windows have been unveiled and the competition is on for who is the most innovative, most elaborate and most enchanting. ‘Tis the season for me to send you warm wishes and talk about the city’s holiday retail landscape.

The city is decked out with displays you’ll love.

The windows are a love letter to New York! They feature seven of the city’s most-treasured cultural institutions; The Philharmonic, Museum of the Moving Image, New York Botanical Garden, New-York Historical Society, American Museum of Natural History, UrbanGlass, and Brooklyn Academy of Music.

My take: Bergdorf is taking a step into a different direction. They are ultimate New York – the center of the vortex – the jewel in the crown – the pinnacle of luxury – the only one of its kind. They have taken the cultural direction – NYC is the cultural arts center of the world.

In partnership with creative director Matthew Mazzucca and Barneys’ team, LA-based artists the Haas Brothers, have created an imaginative universe through a series of vignettes created with diversity and inclusivity in mind. It features a cast of furry, silver and papier-mâché sculpted characters, from a rainbow zebra (a call for LGBTQ inclusivity) to 3-D snakes slithering under the words “Snake Love Not War.”

The message will also be represented on the floors of the retailer’s Madison Avenue flagship, with each floor assigned a “Haas Rule.” The idea is to take the outdoor experience — which encourages window shopping but not necessarily actual shopping — and bring it indoors, closer to the cash register. Barneys will also roll out the holiday window concept across its 14 US stores for the first time in its history.

My take: Barneys is the sci-fi, Star Wars of the department stores…always doing something out of the ordinary…

The Holiday windows will be inspired by 20th Century Fox’s movie “The Greatest Showman,” which is about the life of circus impresario P.T. Barnum. Bloomingdale’s teamed up with Swarovski to create the “Greatest Holiday Windows” and will play music from the film musical. The movie will be released in theaters December 25.

My take: Bloomies has always been cutting edge. They are partnering with the retailers – focusing on of the moment and what is en vogue. Bloomies is to New York as Neiman Marcus is to Dallas.

Collaborated with Lovepop Cards, a Boston-based startup that creates unique 3-D paper sculptures, to design their Holiday windows. My favorite is the 30,000 butterflies and 12 feet worth of sparkly hat boxes in the jaw dropping atrium.

This year is called “The Best and the Brightest.” Each display incorporates enchanted snow globes to help tell the story. The five animated windows boast a unique intricate scene, including Arctic Adventures, Christmas in the City, Holiday Circus, Santa’s Magicand Winter Woodlands.

Lord & Taylor partnered with Hallmark Channel to create a series of windows along 38th Street. The windows feature special animations that celebrate Countdown to Christmas, the network’s programming event.

My take: This is the first year that L&T is decorating the windows along 38th Street – they have to keep up with everyone else and pull out all the stops.

Macy’s claims to be the first department store in NYC to feature Holiday windows since the 1870s. The theme for this year’s holiday windows is “The Perfect Gift Brings People Together” and each window will focus on the joy of sharing holiday festivities with friends and family.

My take: All about Santa and based around the family and children – Macy’s is mainstream.

Collaborating for the first time on a holiday experience, Saks Fifth Avenue and Disney celebrate the season entitled “Once Upon a Holiday.” This is the first time Saks will animate all of the windows.

In celebration of the 80th anniversary of Disney’s Snow White and the Seven Dwarfs, The 14 Fifth Avenue windows will each depict a different scene from the story. Also new this year is a 3D layering technique which incorporates original artwork from the film into the backdrops for each display.

Each window, like a magical jewel box, contains a glittering, festive scene that only Tiffany could conjure up. Where else would one decorate their Christmas tree with diamonds, or throw a lavish feast for fabulous friends with jewel-filled Christmas crackers?

The façade of the flagship will light up Fifth Avenue with an intricate light show inspired by an archival motif depicting a spray of diamonds.

My take: Tiffany’s is taking a page from Bergdorf’s windows of the past – creating fantasy land; they always capture the magic of the season and fill the area with sparkle.