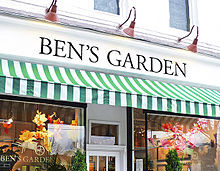 Artist and entrepreneur, Ben Busko, started designing and selling decoupage inspired by his garden when he was just eight years old. Today, the brand’s product line can be found just about everywhere, from Amazon to Nordstrom to Barnes & Noble to 1,400 high-end boutiques across the globe.

“Shoppers today want more personalized, bespoke products and this curated boutique of gifts and home furnishings is a natural fit for the nabe, offering distinct and unique artisan creations in a historic NYC neighborhood that attracts those looking for the perfect combination of arts, culture and luxury,” said Faith Consolo.

Neighbors nearby include fine dining establishments such as David Burke Kitchen, Il Mulino Prime and Ato; luxury hotels such as The James New York and the Soho Grand Hotel; showrooms and boutiques such as Nike Studio, Maison Close and Osswald; and the famed tattoo studio extraordinaire Bang Bang is coming soon.

“This one-of-a-kind outpost captures the distinctive vibe of the surrounding area and will be a great addition to the neighborhood,” added Maglio.

The Faith Consolo Team exclusively represented both sides of the transaction.

The first Ben’s Garden retail store was opened in Oyster Bay in 2004. In 2007, a second location was added in Huntington. An e-commerce site was also launched that year. The company’s main office and studio is in Brooklyn, with production facilities in Oyster Bay and Sunset Park, Brooklyn.