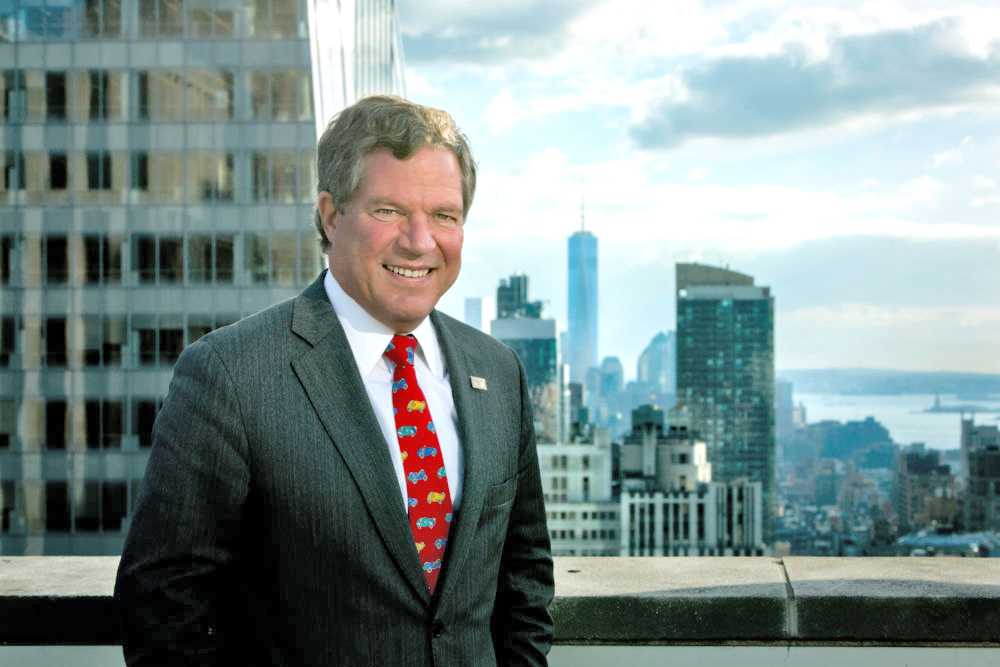 For Steven Levy, commercial real estate is a family affair.

Levy is CEO of Kamber Management Company, a family-owned company in New York City established over 75 years ago that invests, owns and operates commercial and retail real estate.

Started in 1940 by Levy’s grandfather, Abraham Kamber, and later overseen by his father, Stanley Levy, the company’s business objective has always been to gain equity by discerning value and growth in the acquisition of office or mixed use properties.

Equally important has been their commitment to maintaining long-standing relationships with partners, tenants and vendors.

Levy graduated from Connecticut College in 1977 and without hesitation, he immediately entered the real estate business, first as a leasing salesman at Julien J. Studley, and then as a sales broker at William A. White & Sons.

Among his first major deals was brokering the sale of 461 Eighth Avenue which was renamed 5 Penn Plaza.
In 1986, he joined his father to build a family office and, one year later, sold the Siegel Cooper Department Store at 620 Sixth Avenue to Tishman Speyer Properties.

Since then, he has managed and leased family’s real estate interests as head of Kamber Management, as well as the firm’s broader spectrum of investments, along with his brother Peter.

But without question, the “crown jewel” property in the Kamber Management portfolio is Tower 45 at Sixth Avenue, the 40-story, 458,446 s/f Class-A office building located at 120 West 45th Street.
Kamber acquired the property in the fall of 2015 after trading the leasehold at 1407 Broadway and 20 West 33rd Street. A trophy midtown property constructed in 1989, Tower 45 is widely recognized for its boutique size floor plates and incredible vista views.

The property caters to a number of different tenants that currently include Procter & Gamble, TIBCO Software, Shrodinger, and Lipsky Goodkind and Company. The building’s retail space is occupied by the popular Bobby Van’s Steakhouse restaurant.

“It’s a terrific property, but its greatest strength by far is the roster of tenants,” Levy said.
Within only a few months of acquiring Tower 45, Kamber Management embarked on a restoration and modernization of the property that includes a redesign of the entrance, façade, lobby and elevator cabs.

Levy is reimagining the building as a virtually new boutique luxury office tower that Kamber is presenting to the market.

Kamber Management Company has a history of being early adopters of proven technologies. As the latest example of maintaining this philosophy, a new state of the art air quality system has been installed throughout the building. Kamber can now say that Tower 45 has the freshest air in Manhattan with all the intended health benefits.

“The potential for the new Tower 45 is truly greater than I even imagined when we purchased it last year,” Levy said.

“You just can’t beat its location, equi-distant between Grand Central, Bryant Park and Rock Center. The immediate area surrounding the property is undergoing a revitalization and we felt this was the perfect time to implement our own capital improvement plan to inject new life into an already great building.”
Levy has been honored numerous times in the commercial real estate profession, including being named the recipient of the Real Estate Board of New York’s Most Ingenious Deal award for the sale of 1560 Broadway which allowed the Actors’ Equity Union to remain in the heart of the Theater District and not move to New Jersey.

His community involvement outside of commercial real estate includes the active role he has played at the UJA-Federation of Jewish Philanthropies of New York since 1978.

He served on Young Men’s Leadership Cabinet and is a past President and Chairman of the Henry Kaufmann Campgrounds, which serves over 6,000 New York City and Long Island campers each day during the summer.
He is also past President and Chairman of the Greenwich Jewish Federation in Connecticut and served as Council Member of the United States Holocaust Memorial by appointment of President George W. Bush.
With both the acquisition of Tower 45 and the firm’s recent growth, it’s been a productive couple of years for Steven Levy – but there’s more to come.

“Not only are we are going to dramatically raise the profile of Tower 45; we’re looking at further improvement to our portfolio in the coming years.”

Report: Loo clues is putting office hygiene onto the internet of things

Smart parking, or Smarking, making its mark in NYC