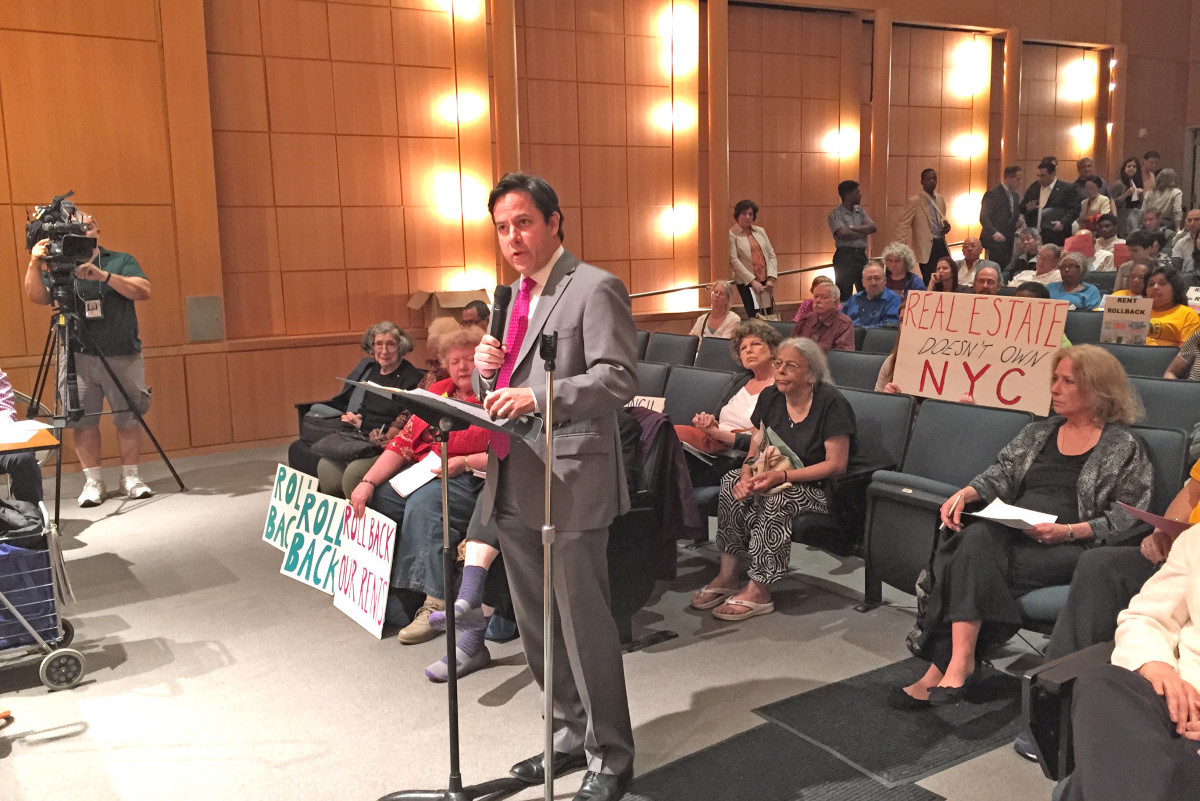 With the Rent Guidelines Board set to decide on rent increases for over one million rent stabilized apartments in the city on June 24, tenants and landlords from around the city went before the board on Monday, June 8 to state their cases.

Numerous landlords, mainly those owning small buildings, testified to ask for higher rents and even supplemental increases for tenants who remain in their buildings for many years.

Several City Council members also spoke for constituents they said are being priced out of their neighborhoods and, in some cases, harassed by landlords who want to oust them and deregulate their apartments.

One of the first speakers was a senior from Stuyvesant Town named Marietta Hawkes, who, after 38 years of living in the complex, is paying 45 percent of her income in rent, which now includes three major capital improvement (MCI) increases.

“Due to these increases, I have had to cut back on food and doctor visits,” said Hawkes.

She added that other actions by owner CWCapital have had taken a toll on her heath. “Because of CWCapital’s harassment and frequent apartment inspections for pressurized walls, checking refrigerators, air conditioners, I suffer from insomnia and high blood pressure. Every day I look under the door for papers to see what CWCapital is planning next to harass tenants. Tenants in Stuy Town are being forced out of their homes.”

Requesting a rent roll back, City Council Member Corey Johnson said “years of increases have left [my constituents] unable to afford to pay their rent as well as basic expenses.

He then praised board chair Rachel Godsil, saying she was doing “a great job.”

However, his compliment didn’t sit well with one of the board’s owner members, Sara Williams Willard, who commented that it was “inappropriate for a public official to single out” any of the members.

“Please address us as a board,” she added.

Enduring both boos and claps as he spoke was Jack Freund, vice president of owners’ group, the Rent Stabilization Association.

Freund informed the nine-member RGB board that the increases they’ve been passing “are not sufficient to meet operating costs.”

He mentioned water and sewer increases and property taxes as the main reasons owners’ costs are going up.

In April, the board’s preliminary vote was for a zero to two percent increase for tenants signing one-year leases and 0.5 to 3.5 percent for those signing two-year leases.

Ann Korchak, whose family owns a building with a mix of stabilized and market rate tenants, said that the rent she currently brings in just isn’t enough.

Meanwhile, the occupants of her building are “well-educated, professional tenants who were lucky enough to find an apartment when they were apartment hunting many years ago.”

Some of them, she’s learned, own vacation homes in Florida. “The noble idea of affordable housing for working families is not being realized on people who won the lottery and pay far below market,” said Korchak.

She added that this year, she had to pay $40,000 for a new boiler. In response, tenant member Sheila Garcia asked her if she was planning on charging an MCI “for which you’ll get a six percent increase.”

Korchak responded that some applications aren’t necessarily considered eligible. Williams Willard then weighed in to say that Korchak still had to pay for the project before she knew if an MCI application would be approved.

“We have to replace it because they need hot water,” Korchak added.

A less responsible owner was the subject of the next person’s testimony, Cheryl Miller of Washington Heights, who said her building hasn’t had cooking gas in three weeks after it was shut off due to a gas leak.

“This could result in another East Village situation,” said Miller, referencing the explosion on Second Avenue in March. “And for all of that, they want an increase?” She then asked for a rollback “for those deadbeat landlords.”

He mentioned his constituents in Stuyvesant Town, who “have a big corporate landlord who appropriated (the property) after the largest failed real estate transaction in history. They are not struggling. They are certainly not suffering.”

RBG tenant member Harvey Epstein then asked Garodnick what his thoughts were on the argument that stabilized tenants don’t need their apartments because they have second homes elsewhere. In response Garodnick said he didn’t see that as being “the core question.

“You’re always going to have a handful of people who are not in need of a rent stabilized apartment,” he said, “but fundamentally, you have so many New Yorkers who need the protection that this board is able to afford to them.”

Garodnick also addressed the issue of property taxes, saying he would be open to having a conversation about “ways to give relief” with regards to property tax or commercial rent tax. This seemed to relieve Williams Willard, who said, “I like the idea of a conversation.”

Council Member Margaret Chin told the board that in her district, which covers Lower Manhattan, “Landlords are buying building after building, just so they can turn them into luxury rentals and their first order of business is to harass the rent stabilized tenants.”

Chin, who said she wanted a rollback, added, “A lot of these landlords, they’re headed by hedge funds and they say, ‘oh, we’re going to improve the building,’ but then they’re doing construction and they don’t care about the tenants.

“They refuse to renew tenants’ leases and they make buyout offers so they can turn a couple of hundred dollars into a couple of thousand.”

Sharon Canns, a tenants association president of a building on the Upper West Side, said in her building, the MCIs were “unstoppable.”

“We’ve had to hire a $350-an-hour attorney to fight these MCIs,” she said. “I don’t have a house anywhere. I depend on my rent stabilized apartment. I do community work on the Upper West Side. I just want to stay.”

Another tenant couldn’t keep back her tears as she said she understood how owners have rising costs to cover.

Edna Ellis, who lives in Harlem, said, “I get it. Small businesses have expenses. But I don’t have any more money. What am I supposed to do?”

Another speaker, who said he owns a building with his uncle, asked for an increase that takes unexpected costs into consideration.

Rino Pietanza said that one of his tenants recently became injured and stopped paying rent. “He chose to pay for medicine instead of paying rent; how could we blame him? We let him stay.”

Hal Brill, who introduced himself as “a small owner,” criticized the board for passing increases that he said weren’t keeping up.

“Owner costs always rise,” said Brill. “Real estate taxes, water rates, they’re never rolled back. The RGB has failed in its mission to provide adequate increases in decades. This has resulted in longterm tenants with the lowest rents of all. Multiple generations in an apartment. Their low rents should have supplemental increases in addition to a high RGB increase. The system is skewed against landlords.”

The RGB has so far never voted in favor of a rent freeze, though last year the increases were historically low at one percent for one-year leases and 2.75 percent for two.

The public hearing, held at CUNY’s Graduate Center on 34th Street, was one of four taking place around the city. The next and final one before the vote will take place tomorrow (June 18) from 5-8 p.m. at Brooklyn Borough Hall.

Reports asks, could a tax benefit keep rents down?