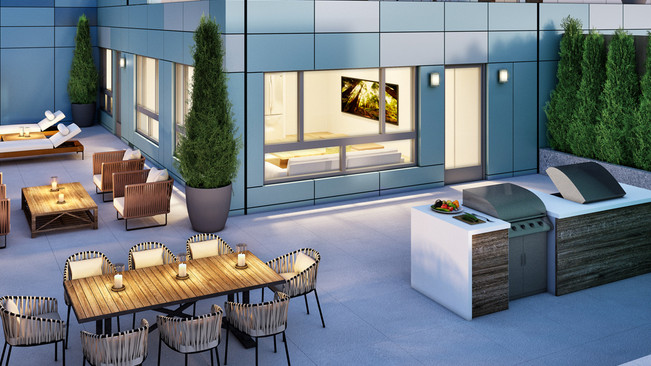 As Harlem has seen an explosion of new development and revamped retail, both buyers and renters have been flocking to “Northern Manhattan” to take advantage of good housing at a lower price.

One one such property is the new condo building The Aurum, an eight-story, 115-unit new development at 2231 Adam Clayton Powell Jr. Boulevard, in the heart of the neighborhood.

The building was developed by BRP Companies, a company more known for building affordable housing. BRP first purchased the site four years ago, and the initial plans were to build a market-rate rental with 20 percent of the units affordable.

The team decided it made more sense to go condo and switched gears, and this past February the building launched sales. After just four months, it was 60 percent sold.

Construction is now complete, and they are targeting a move-in date at the end of this month.

“It has a lot of features that people like,” said Meredith Marshall, managing partner and co-founder of BRP Companies. “It’s a Manhattan building that happens to be in Northern Manhattan.”

Other features of the building, including the 25-year 421a tax abatement, large terraces in some of the penthouse units, and an expected LEED Gold certification add to the package.

“Sales have been off the charts,” said Jeff Krantz, of Halstead Property Development Marketing, which is handling sales at the building. “The response has been unbelievable to the price point, the building and the amenities.”

New retail has been opening up along Adam Clayton Powell Jr. Blvd., similar to the revival Frederick Douglas Blvd. enjoyed in 2009, and the building is located near Harlem hot spots the Apollo Theater, Red Rooster, and the highly-anticipated Whole Foods Market that will open soon on 125th Street.

“You get a lot of amenities and a lot of space, for what we believe in Manhattan is a bargain,” said Marshall. “And with interest rates being very low, and the 25-year tax abatement, it has everything someone would want for a starter home or even empty-nesters looking to sell their home and move to Harlem.”

This is the third condo project BRP Companies has done in Harlem. In 2011, the firm built The Douglass on 114th Street and Frederick Douglass Blvd, and before that, they completed a condo building in 2008.

Marshall said his firm is looking at developing and affordable and mixed-income building on a site in West Harlem, but couldn’t reveal more details about the project. 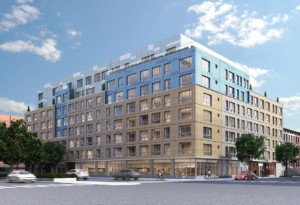 Last year, BRP Companies paid $20 million for a development site in Downtown Jamaica, Queens, where the company is planning to build Jamaica Crossing, a pair of residential towers that will have 580 mixed-income rental units, and 100,000 s/f of retail space. Marshall said he expects the project to be completed in about three years.