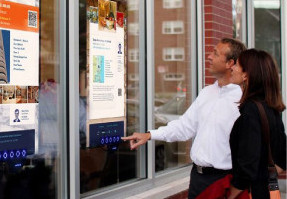 CORE’s Chelsea office is hard to overlook. Straddling the corner of Seventh Avenue and 18th Street, it sits behind floor-to-ceiling glass windows that showcase the brokerage’s latest listings on classic print-outs. Through the windows, passers-by can see couches in the waiting area and photos of brownstone walk-ups on the walls.

Everything about the office is designed to draw people’s attention – with some success. CORE broker Steve Snider said pedestrians often stop to look at the listings and end up walking in, leading to an average of 25 to 30 additional clients each week. This year alone, Snider has won $5 million in listings from walk-ins.

“We pay a ridiculously high amount of rent, but we also get a tremendous amount of people,” he said.

His colleague Paul Johansen added that he gets as much as 90 percent of his business from walk-in clients.

There is no doubt that CORE’s Chelsea office is successful. But does it have a future?

A number of observers argue that brokerage storefronts are a dying breed in the internet age.

As more and more information on listings is brought online, the argument goes, brokerage storefronts will eventually share the fate of book- or CD-stores and become redundant.

Somewhat belatedly, the internet has started to transform the brokerage business. Online listing databases like Craigslist, Streeteasy and Trulia have been growing rapidly over the past decade, taking business away from traditional brokerage offices. The city’s newest brokerage, Urban Compass, chose to showcase its listings exclusively online and doesn’t have a single storefront.

And yet the brokerage storefront has proved to be a remarkably resilient model. REBNY doesn’t track their total number in New York City, but reckons it “probably increased” over the past years. Whenever firms enter an emerging neighborhood, they still usually start by opening a retail office there: just two months ago, Halstead announced it would open its first storefront in Bed-Stuy.

“Looking for a place to call your home is a very emotional and face-to-face process. Some clients prefer to initiate human contact sooner rather than later.”

Scepanovic said walk-ins at the brokerage’s four storefronts make up about 20 percent of its new clients. Even if clients initiate contact online, they often still prefer to then meet up in the office.

Another reason why brokerages continue to bank on storefronts is the high retention rates they generate.

Douglas Elliman broker Mark Menendez, who co-manages the firm’s Tribeca office, puts its walk-in retention rate somewhat lower at 40 to 50 percent. But he agreed that storefronts increase the likelihood of browsers becoming customers.

“When you meet face-to-face it’s a lot more personable. There’s a lot more commitment from both sides, and you can establish a connection,” he said. “When you have someone in front of you, people tend to open up a lot more.”

While clients’ preferences for face-to-face contact and high retention rates seem to spell a bright future for brokerage storefronts in New York City, other factors give reason for pessimism.

For one, clients’ preferences can change. Buyers or renters may crave a broker’s handshake now, but if they become more accustomed to online listings and 3D space-viewing technology gains ground over the coming years, more people could start viewing apartments as something that can be bought or rented online.

“I think if retail rents keep going where they are going it will be very hard for brokerages to justify retail offices,” said Gary Malin, President of brokerage Citi Habitats. “Half the office is empty all the time because people are out. To spend that amount of money for retail rents if people don’t use them is tough.”

Citi Habitats recently merged two Upper West Side storefront offices, and its newest office will be on the fifth floor of 665 Broadway with no retail component.

“As all our retail leases come up for renewal, we will do a thorough analysis, and probably move some of them upstairs,” Malin said, adding that offices on higher floors tend to be significantly cheaper than retail spaces.

The high cost of retail storefronts was a main reason why Urban Compass chose to make do without them. Gordon Golub, Urban Compass’ chief residential real estate officer (and Citi Habitats veteran), said the money saved on storefronts allowed the brokerage to invest heavily in its online technology.

But despite Urban Compass’ focus on online listings, Golub dismissed the notion that brokerage storefronts could disappear anytime soon.

“I would expect (storefronts) to continue being important, and I wouldn’t rule out that at some point in our business plan we may decide there is a reason to have some sort of retail presence,” he said.

And while Citi Habitats is consolidating, other brokerages are adding retail space. Two of the city’s three largest brokerages – Halstead and Douglas Elliman – said they increased the number of storefronts in recent years. Corcoran declined to comment.

As internet technology continues to make inroads into residential brokerage, retail is likely to decline in importance. But if the current trend is any indication, brokerage storefronts won’t disappear anytime soon.