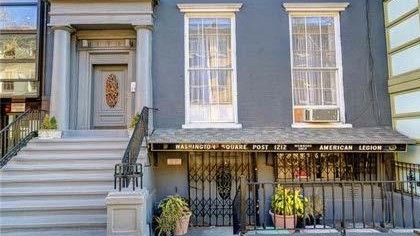 THE former home of actor James Gandolfini is on the market for $15.695 million.
179 Sullivan Street is a four-story, 8,000 s/f Greek Revival townhouse that is currently configured as six units with a curved interior staircase climbing through the house.
Built in 1990, it was once home to industrialist Jay Gould, former New York Mayor Fiorello LaGuardia and, most recently, the Sopranos star who died during an Italian vacation in 2013.
Originally Gould’s sitting room and library, the parlor floor has double height windows with original shutters with arches and cornices framing the living and dining rooms.
The two first-floor units have a designer kitchen leading to an iron clad mezzanine, master bedroom and landscaped private terrace.
There is a second terrace on the second floor and a flat roof lends itself to utilization of air rights or as a roof top terrace, according to listing agent Barbara Dansker of Marcus & Millichap.
Located between Bleecker and West Houston Streets, Dansker believes “the house speaks to a homeowner seeking a single family residence, a multifamily developer of high end rental/condo properties or a prestigious live/work property.ˮ

Enzo Morabito of Douglas Elliman is listing one of Christie Brinkley’s Hamptons homes for $29.5 million.

The main four bedroom house sits on a 20-acre estate in Bridgehampton called Tower Hill.
There is a separate four-bedroom, 2.5-bath guest house with a greenhouse conservatory and a separate barn/artist studio with living quarters as well as a four-car heated garage.
The main house has a double-height great room, living and family rooms, three fireplaces, a gym, office, stone terraces, and a gated entry.
Brinkley is selling her estate now that her three children — Alexa Ray Joel, Jack Brinkley-Cook and Sailor Brinkley-Cook — have flown the nest.
Singer/songwriter Alexa Ray has been living in NYC for several years pursing her music career; Jack lives in Manhattan and is studying acting and Sailor is going to college in New York City in September.
Brinkley plans to move to one of her other properties in Sag Harbor.