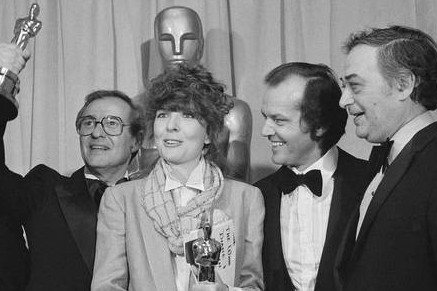 HAVE YOU HEARD? Oscar winner’s Upper West Side home for sale; Realtors rally for hurricane victims

THE family of the late producer and talent manager Jack Rollins is selling his Upper West Side home.
Rollins — who died in 2015 at the age of 100 — managed the careers of Harry Belefonte, Woody Allen, Billy Crystal, David Letterman and Robin Williams, among others.
The born-and-bred New Yorker was credited as an executive producer on many of the films directed by Woody Allen from 1969 to 2015 and was an executive producer of Late Night With David Letterman.
His home at 110 Riverside Drive has been listed at $3.2 million by Triplemint agent Julie Gans.
Gans tells us the three bedroom, 2.5-bath apartment has a “massive” great room with beamed ceilings that’s great for entertaining and giant picture windows showcasing stunning river views. Rollins is pictured top (far right) collecting the 1978 Oscar for Best Picture for Annie Hall, with co-producer Charles Joffe,  Diane Keaton (Best Actress), and Jack Nicholson who presented the awards. Photo via Flickr, courtesy Associated Press.

A GROUP of Long Island agents launched a campaign for hurricane victims.
Homes By Mara Realty founder and president Mara Navaretta and her team are collecting non-perishable foods and paper goods, such as toilet paper, paper towels and paper plates now through October 13.
“I believe we all have a responsibility to be mindful of what is happening around our country and of those in need,” said Navaretta.
“What happened in Texas and Florida hit home for so many of us as it could have happened to any of us here on Long Island. We invite Long Island residents to make donations to our collection drive so we can extend a helping hand for who have lost so much as they begin their long road to recovery.”
All items collected are being donated to the nonprofit organization Island Harvest, which will ship Homes By Mara donated items to Texas, where they will be disseminated to those impacted by Hurricane Harvey.

The Hudson Gateway Realtor Foundation is hosting a Black & White Masquerade Ball on Thursday, September 28 from 6 to 10 pm at the Falkirk Estate and Country Club in Central Valley.
The event will mark the 20th Anniversary of the Association’s support of Make-A-Wish Hudson Valley, a non-profit group that grants the wishes of local children with life-threatening medical conditions.