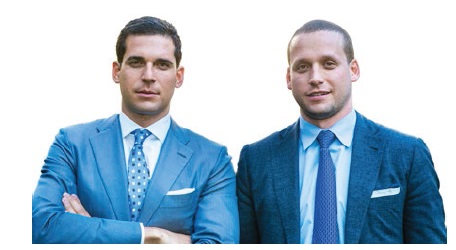 Douglas Elliman’s Oren and Tal Alexander have signed a $90 million-plus contract for the 20,500 s/f mansion at 19 East 64th Street.
The buyer is the state of Qatar, which plans to use the building as a consulate. The seller is the Wildenstein family, which currently operates a gallery from the property.
“Oren and Tal Alexander had the ingenuity and talent to bring the buyer to this extraordinary property, which was not even listed,” said Dottie Herman, president and CEO of Douglas Elliman.
“We are very proud of their motivation and ability to succeed, not only in New York, but in a national marketplace.”
Consul General Ahmed Yousef Al-Rumaihi said he was drawn by the building’s history, its location and its security features.
Built with steel construction, the five-story building has reinforced floors built to accommodate the weight of vaults. “It’s an amazing building,” he said.
Al-Rumaihi thanked the Alexander brothers and Corcoran power broker Carrie Chang for what he called a “successful searchˮ for a consulate property.

The Corcoran Group has been appointed by Macklowe Properties as the sales agent for 737 Park Avenue.
The 21-story, pre-war building has been transformed to offer 60 apartments with 9-to-13 rooms and ranging in size from 3,000 to over 6,000 s/f.
To date, there has been more than $250 million in sales at the building, including a $25 million apartment.
“We have an established working relationship with The Corcoran Group and felt that it was excellent timing for this transition as the building plans to unveil its penthouse this year,” said Jarrett White, vice president of Marketing for Macklowe Properties.
Corcoran agents, Deborah Kern and Hilary Landis, will lead the sales team at 737 Park Avenue.

Architect Emery Roth’s private mansion in the sky designed for himself and his family in 1924 set atop 210 West 101st Street has returned to the market fully restored to its old world charm.
The 2,200 s/f penthouse with a wraparound terrace and panoramic views was designed for Roth’s wife Ella, who wished for a home in the country with a garden.
The property has not been on the market for nearly 10 years and is priced at $15,000 per month.

Individual rooms were designed with elaborate features, including shallow barrel vaulted ceilings in the foyer and living room, stained glass doors, a dining room ceiling composed of geometrically inlaid wood marquetry, a ceramic wall sculpture said to be a portrait of his wife in the living room entrance gallery, carved dark stained woodwork and a fireplace designed with ceramic tiles.
One of the most unique features of this home is the doghouse situated in a corner of the terrace just outside the original maid’s quarters.
The property is being marketed by Argo Residential.