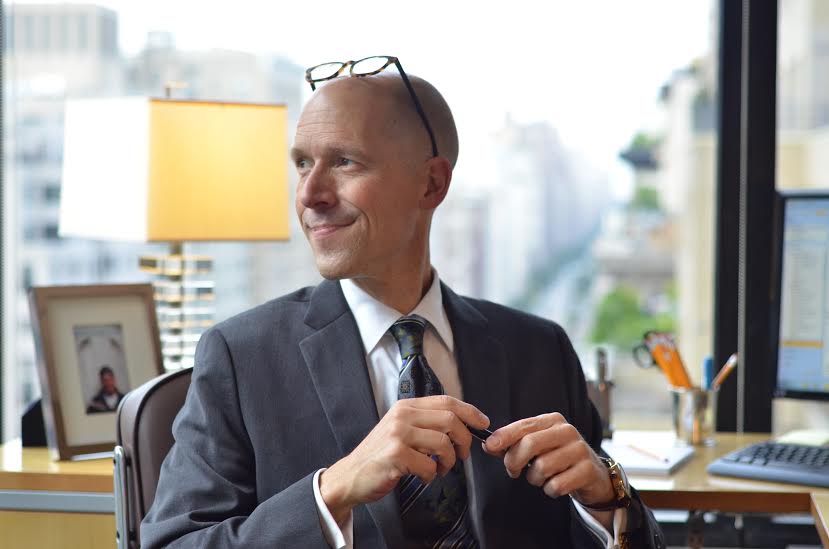 Jim Gricar, a native of Cleveland, was drawn to the bright lights of New York City in his youth and he would eventually thrive under them.

“Ever since I was a teenager, I was fascinated by the idea of New York as a lot of Midwestern teenagers are,” Gricar told Brokers Weekly shortly after being named the general sales manager of Houlihan Lawrence. “I was hooked the minute I got here.”

“I’m thrilled to be with Houliahn,” Gricar said, calling his new home a “market leader” that “dominates” Westchester County.

Though he is a newcomer to much of the world of Manhattan’s northern cap, Gricar plans to know the area “inside and out,” in a matter of months.
A quick look at his backstory makes that tall task seem more than possible.
It wasn’t the business world that wrangled Gricar’s attention when he finally arrived in New York. At least not right away.

Before becoming a standout producer at Corcoran in the 1990’s, Gricar spent a brief time at Chase Manhattan.

“I found it deeply unsatisfying and decided to try following my passion which, at the time, was the theater,” Gricar said. “I worked as an actor consistently for eight years.”

He appeared in classics such as Sweeney Todd and Jesus Christ Superstar, but even amidst that success, he soon found the white collar world calling him back.

“I was a journeyman actor and I did roles that I wanted to play and did jobs that pleased me, I was very lucky as an actor,” said Gricar. “I moved into real estate to feel more tangible success.”

While Gricar was looking to build a solid financial and professional future, he found himself in a somewhat unique position.

A career on the stage is considered by most to be a pipe dream, or something to pursue at night when they punch out at their desk job.

Gricar, on the other hand, was leaving a rare steady paycheck from a life in theater for the uncertainty that comes with a regular job in the commission-fueled world of real estate.

Calling the move a “leap,” Gricar said the transition was manageable because of the similarities he found between show business and real estate.

Both required a strong presence and interpersonal skills. They also each required going above and beyond the call of duty.

“When I first started in real estate — I didn’t tell my clients or my partner this — but I moonlighted,” Gricar said.

“I bartended, I did whatever I needed to do for the first six months until I got a closing check and then — knock wood — they just kept coming.”

Gricar admitted that in today’s world, holding a side job while trying to make one’s name in real estate is likely not feasible.

“I don’t think it extended into the hours that it does now,” said Gricar. “In those days, when a customer went home and sat down to dinner, you didn’t talk real estate with them anymore.

Despite the grind of working two jobs, he was invigorated by his opportunity at Corcoran.

“I was very interested in sales,” said Gricar, who had long been convinced that he would thrive in that environment.

“I think I quickly narrowed it to real estate because it was Manhattan in the 90’s. Prices were really soft. I zeroed in on real estate because I thought I’d be good at it and I was fascinated by it,” he continued.
But confidence doesn’t put food on the table. Gricar needed that first sale.

“I want to sell your apartment more than anyone, except maybe you,” Gricar told his client when handling his first deal.

In order to move the property, a one bedroom co-op with a terrace, Gricar found a potential buyer who was located in Chicago. With video-recording cellphones still years away, Gricar resorted to the old-school method of capturing the home with a camcorder and shipping the tape out to the Windy City.

“I got a listing, I hadn’t gotten anything before. I sold it for more than asking,” said Gricar as he reminisced about breaking the ice in his sales career.

“I just grabbed onto that and ran.”

Now Gricar is taking his talents to an area where he is less established. However, he is far from daunted. If anything, he’s happy to have a new challenge to conquer.

“I’ve never fully taken my agent hat off,” Gricar added. “I hope I never do.”
He is no longer a soldier on the frontlines. His current role is a managerial one. However, he does not feel his approach to the business should change.

“Houlihan Lawrence is a storied brand with tremendous momentum, and I’m thrilled to join the Meyers family in writing this next chapter of the firm’s history,” said Gricar. “This role presents opportunities that are a natural career progression for me, and being a homeowner in both Connecticut and the Hudson Valley gives me the added bonus of being passionate about the communities Houlihan Lawrence serves.”