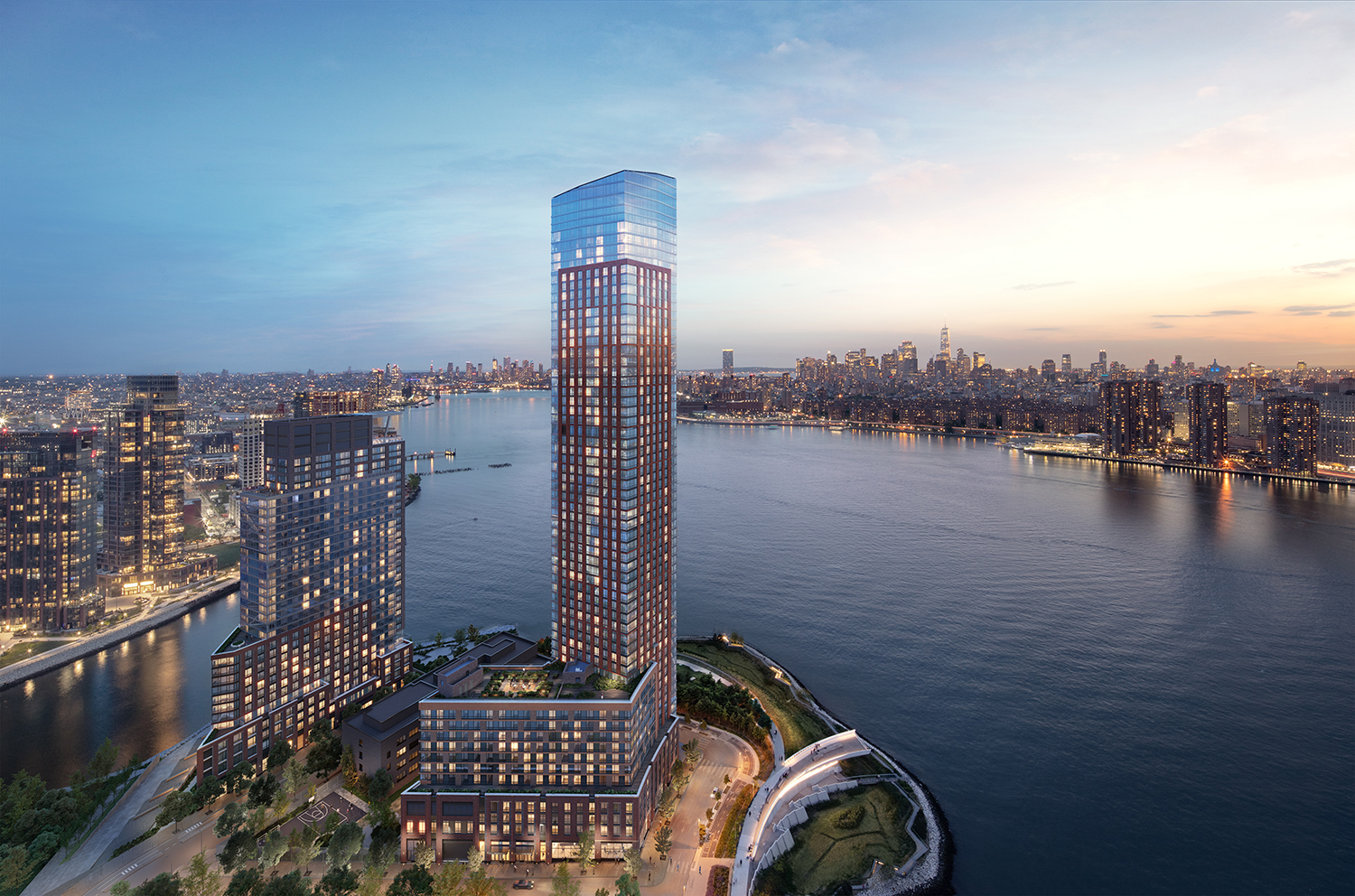 The Gotham Organization, together with RiseBoro Community Partnership, has released renderings of Gotham Point, in the Hunter’s Point South waterfront neighborhood of Long Island City, Queens.

Gotham Point consists of two towers, which will include 1,132 total residences with 75 percent of units priced at affordable rates, senior housing, shared amenities, community facility and retail space. The South Tower is estimated to be completed in late 2021 and the North Tower in 2022.

With an emphasis on creating an inclusive community, Gotham and RiseBoro have envisioned Gotham Point as a mixed-income, multigenerational residential community.

The leasing gallery for rent-stabilized residences will open in October at 57-28 2nd Street in Long Island City.

“Gotham Point provides much-needed, rent-stabilized housing in New York City and we are excited to expand our Gotham Properties portfolio to the transformative waterfront neighborhood of Hunter’s Point South,” said Bryan Kelly, President of Development at Gotham Organization. “The wide range of thoughtful amenities as well as meaningful partnerships with RiseBoro, Flux Factory and other organizations will no doubt enhance and meet the needs of this continually-growing and vibrant community.”

The amenity spaces will be accessible to all residents across both towers. An additional fee applies for club membership to select amenities. Among the amenity package are 24-hour attended lobbies, a rooftop terrace, resident lounges and sundecks, a indoor and outdoor fitness club, a children’s playroom and a publicly accessible urban rooftop farm and community boathouse.

Within the North Tower, Gotham Point will include small-format retail spaces as well as a below-grade public parking garage. On the ground floor of the South Tower, there will be 3,000 s/f of retail space designated as Flux Factory’s new permanent home and fourth location, “Flux IV”, to support emerging artists with an artist-in-residency program.

Gotham Point also helps to meet the needs of New York City’s growing senior citizen population, with 98 homes set aside for low-income seniors in an 11-story dedicated wing for independent senior living. The senior living community will feature its own personal lobby space as well as a lounge and laundry room on each floor, library, and community room with a shared pantry. The dedicated senior wing will also include an outdoor terrace with views of the entire Manhattan skyline. RiseBoro will be leading special programming for the senior community.

“After an incredibly difficult year, New York City seniors deserve to have access to affordable homes with integrated services,” said Scott Short, CEO of RiseBoro. “Gotham Point accomplishes that goal within an iconic project on the LIC waterfront. We look forward to bringing this critical resource to the community and sustaining it for years to come.”

Located on the water, Gotham Point offers access to Hunter’s Point South Park and the restaurants and retail in the Long Island City neighborhood.  The towers are near the 7 subway line, the East River Ferry and the Long Island Rail Road, with a complimentary shuttle connecting residents to all other subway lines at Court Square.

A five-acre waterfront park constructed by NYC Economic Development Corporation and a 1,100-seat Intermediate/High School built by the School Construction Authority have already been completed as part of the first phase of the project’s development. A new building has been constructed adjacent to Gotham Point, which will become the new home of K-5 Elementary School P.S. 384.

The street network boasts a pedestrian-scaled street design that ties into the existing street grid and neighborhood, and also taps into nearby transit connections. The overall plan completed the Uniform Land Use Review Procedure (ULURP) in November 2008.