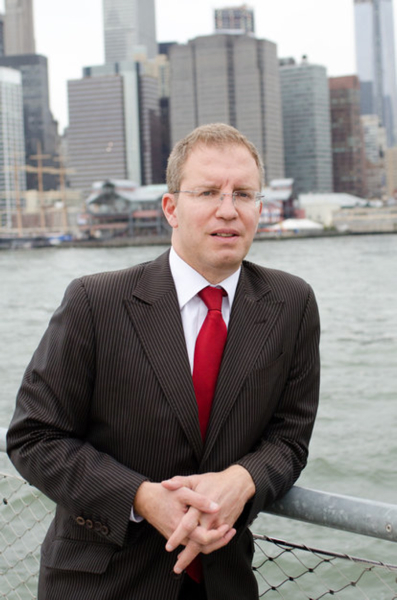 Glenn Markman, whose passion, creativity and entrepreneurial spirit transformed his home borough of Brooklyn, many of New York’s neighborhoods and the City’s real estate industry, lost his battle with cancer today, at the age of 52.

Markman, who credited his success to his childhood experience playing basketball at the Bensonhurst Jewish Community House and Kutscher’s Sports Academy, was widely regarded as a highly accomplished real estate professional, successful entrepreneur and generous, civic-minded philanthropist, and was best known for the deep love he had for his family.


Glenn often remarked that “being a successful broker is no different than playing point guard. You need to make your team better, keep your eye on the competition and make sure you see the entire floor – controlling the entire game. No different than completing a real estate transaction.”

In his 28 years of experience as a real estate broker, including the past 12 years at Cushman & Wakefield, Glenn gained recognition as a leading expert on the Downtown Brooklyn market – which is now the City’s third largest commercial district, and one of the fastest-growing residential neighborhoods in America.

“Glenn was devoted to his family, clients, Cushman & Wakefield and his Brooklyn roots,” said Ed Forst, President & CEO of Cushman & Wakefield. “Glenn distinguished himself through his work ethic, integrity and passion. We’re all very proud that he was part of our team and our deepest sympathies go out to his family and loved ones. He will be sorely missed by all those who knew and loved him.”

“Glenn Markman is a special man. When Glenn joined Cushman & Wakefield I was the CEO and from day one I knew he was a difference maker, a team player and a leader,” said Bruce Mosler, Chairman of Global Brokerage at Cushman & Wakefield. “As I made my return to brokerage, Glenn and I were hired by the Brooklyn Nets to find the team an appropriate location, including for them to build a state-of-the-art practice facility. Mr. Brooklyn immediately took control and, largely because of his passion for and knowledge of the borough of Brooklyn, Glenn found the team the perfect location in Industry City. The joy of working with my friend so closely these past several years and the privilege of working with this ‘gentleman broker’ has been inspirational.”

It was his love for basketball that drove Glenn to approach the National Basketball Association and initiate the idea of an NBA-themed retail store. As the NBA’s exclusive representative, he negotiated a lease for its 35,000 square foot store at 666 Fifth Avenue. Similarly, it was his passion for the game, and love of his hometown Brooklyn, that had him work with the Brooklyn Nets in the relocation of their offices to downtown Brooklyn. Most recently, he masterminded the creation of a new $45 million training center for the Nets in Sunset Park’s Industry City.

Glenn was one of the first real estate professionals to understand the importance of the technology sector to the City’s economy. In 2000, Senator Charles E. Schumer asked Glenn to serve as a member of the Group of 35, a team of government, business and civic leaders that was formed to guide the growth of tech companies in New York. His work with the tech sector continued until his passing, recently working with 3-D printing pioneer MakerBot to create its home at Industry City. His work with MakerBot was nominated for a Real Estate Board of New York (REBNY) Deal of The Year award this year.

“Glenn was a special person – a true partner and friend. It’s inspiring to work with someone who is truly interested in success for all and who lived life so honestly and fully,” said Jenny Lawton, acting CEO of MakerBot.

While industry leaders such as the NBA, fashion designer Michael Kors and Vevo – the world’s leading premium music video and entertainment platform – all benefitted from Glenn’s keen understanding of real estate, it was Brooklyn that benefitted the most. Markman’s vision helped establish Brooklyn as a viable commercial center and his skill and dogged determination made the borough one of the best renowned real estate brands in the country.

Bruce Ratner, Chairman of Forest City Ratner Companies, said “I had the pleasure of knowing Glenn Markman for almost 25 years. We were drawn together in the late 1980s by a shared vision of Brooklyn as a center of vitality, energy and immense economic and cultural possibility. Most people had written the borough off, but Glenn, who was born and raised on its streets, was that rare and passionate believer who felt drawn to act. He brought new companies and workers to downtown Brooklyn, opened restaurants when no one would invest, and extolled his home borough’s virtues to all who would listen. Most important, he generously gave back as a board member of the Downtown Brooklyn Partnership, the Brooklyn Navy Yard and as a supporter of the Brooklyn Hospital Foundation, the Bensonhurst Jewish Community House, and Brooklyn Friends School.

Mr. Ratner continued “Glenn’s courage in his last months was an inspiration to his many friends, but the truth is that he led his whole life with grace and optimism. He was a kind and generous man, the best father to his children, Clio and Edie Ray, and the best husband to his wife, Jan. I will miss him tremendously.”

Following the example of his father, Marty Markman – who, with his own father and brother, in the early 1960’s opened Markman’s Drug at 1683 Bedford Avenue in Brooklyn – Glenn launched several entrepreneurial ventures. In 1994, Markman, along with his brother Greg, operated the Heights Café on the corner of Montague and Hicks Streets in Brooklyn Heights. In 2012, Glenn and Greg again teamed up to open Dellarocco’s Authentic Neapolitan Pizzeria, also in Brooklyn Heights.

Most recently, Glenn, with his wife Jan and other partners, launched BKLYN1834, a platform for accelerating the careers of artists and incubating the communities that organically form around them. The company, located in Industry City, helps artists engage their audiences and expand their digital reach.

“Glenn was a quintessential New Yorker,” said Bill Rudin, CEO and Vice-Chairman of Rudin Management Company and Chairman of the Association for a Better New York, of which Glenn was an active member. “Glenn understood like few others the dynamism and vibrancy of New York City. He got Brooklyn before Brooklyn was cool. He got tech before tech was cool. And unfortunately, in losing Glenn’s battle with cancer, our city lost our champion trend-spotter. His impact on our city was immeasurable and he is missed dearly.”

As successful as Glenn was at business, he was even prouder of his accomplishments in his philanthropic and civic endeavors. For the past 10 years, Glenn served as a Board Member of Trevor Day School and worked pro bono for the school in its relocation and expansion. Glenn also served on the boards of the Downtown Brooklyn Partnership and the Brooklyn Navy Yard Development Corporation, and helped guide the activities of and raise money for Horizons at Brooklyn Friends Schools and Jewish Community House of Bensonhurst. This past June, Glenn received the Renaissance Award from the Brooklyn Hospital Foundation.

Glenn’s love for New York was heightened in 2007-2008 through his participation at David Rockefeller Fellow, a program of the NYC Partnership, often noting that it was the most rewarding year of his professional experience.

“Glenn was selected as a David Rockefeller Fellow because of his outstanding professional achievements and his commitment to making the city a better place for everyone,” stated Kathryn Wylde, President & CEO of the Partnership for New York City. “He put his leadership skills to work as a key player in the resurgence of Brooklyn.”

He is survived by his wife of 21 years, Jan Testori-Markman and their son Clio, a sophomore at the College of Holy Cross, and daughter Edie Ray, a junior at Trevor Day School; parents Marty and Karen Markman, his brother Greg Markman and sister-in-law Margaret and their children, Nick, Andrew and Joey; his mother- and father-in-law Christine and Edward Testori; and his brother- and sister-in-law Jay and Susan Testori and their children Gina, Julia, Scott and Amber.
In order to carry forward Glenn’s commitment to philanthropy in the city he loved so dearly, his family has established the Glenn Markman Memorial Fund. The fund will be administered through The New York Community Trust. If you wish to honor Glenn’s memory, contributions can be made to The New York Community Trust-Glenn Markman Memorial Fund, 909 Third Avenue, 22nd Fl, New York, NY. 10022.