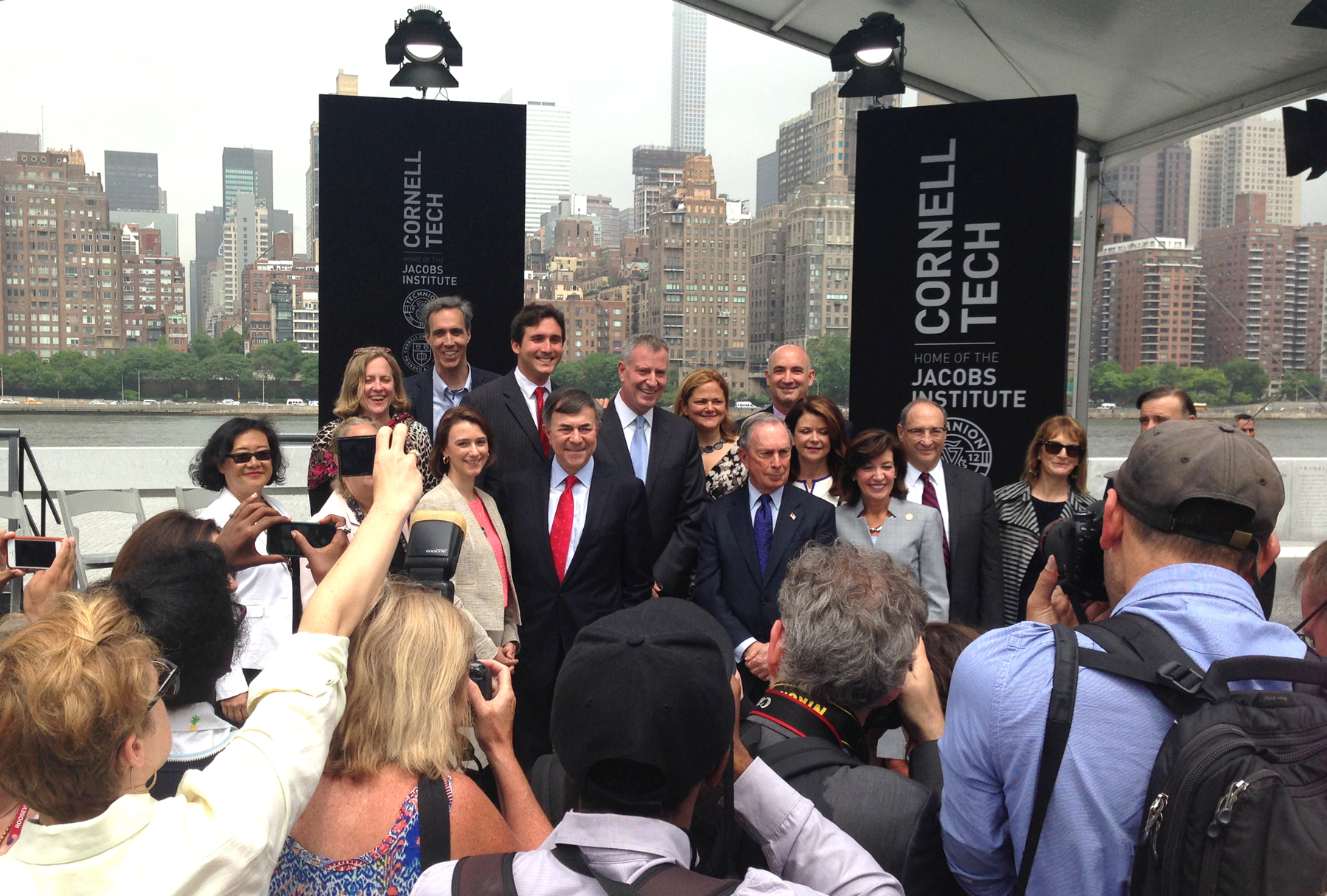 New York City’s top legislators and industry executives officially kicked off the Cornell Tech Campus on Roosevelt Island yesterday morning, a $2 billion project that will bring cutting-edge education and technology to a city with a fast-growing tech scene.

Hundreds of guests and members of the press gathered in Four Freedoms Park on Roosevelt Island yesterday morning for the groundbreaking event, just south of where the 12-acre campus is being built.

The groundbreaking event had originally been scheduled for January but due to a snowstorm was rescheduled.

“Snow is the one thing that tech couldn’t overcome,” Mayor Bill de Blasio quipped at the event, which thankfully was spared any rain or snow but was instead hot and muggy.

The Cornell Tech campus, a partnership of Cornell University and Technion-Israel Institute of Technology, will offer graduate degrees in applied sciences and technology. The campus will house 2,000 students and hundreds of faculty and staff once completed. The first phase of the energy-efficient complex is expected to open in the summer of 2017.

“We knew all along…if we could connect the tech sector to everything else in New York City, we could have an unbeatable hand to play,” said de Blasio, citing a tech ‘ecosystem’ that has connected the tech sector to finance, fashion, and the manufacturing industry. “It’s growing so organically and powerfully.”

He added that more New York companies than California companies sought startup funding in the first quarter of 2015, and that there are 300,000 jobs in the tech sector in New York City, nearly half of which don’t require a bachelor’s degree.

The mayor also thanked former mayor Michael Bloomberg, who also spoke at the event, for his administration’s contribution and support of the project, as well as Bloomberg Philanthropies’ $100 million donation to Cornell Tech, which he announced the night before.

Cornell University president David J. Skorton told the audience that $685 million in philanthropic funds has been injected into the project, as well as an additional $100 million in funds from the city.

A temporary Cornell Tech campus has been up and running since 2013 at Google’s building in Chelsea, and now has more than 100 graduates.

Developers of the project also revealed that the first building at the project will be built to passive house standards – an extremely energy-efficient building standard that uses 60 to 70 percent less than other buildings of the same size – and once completed, will be the world’s first high-rise passive house residential building.

Developed by the Hudson Companies, the 270-foot tower will house around 350 residents, and was also planned by a team including Monadnock Construction, which built the micro-unit building in Kips Bay, Handel Architects, Steven Winter Associates, Buro Happold, and Related Companies.

Also unveiled at the groundbreaking was Forest City Ratner Companies’ The Bridge, a cutting-edge office building designed by WEISS/MANFREDI that will house startups companies and established companies in the digital technology fields.

Cornell Tech will lease a third of the seven-story building, and the remaining 200,000 s/f will house the mix of startups and established companies, with devoted flexible spaces and common areas built to encourage interactions and collaborations.

Deadlock in Albany puts 421-a, rent regulations in limbo