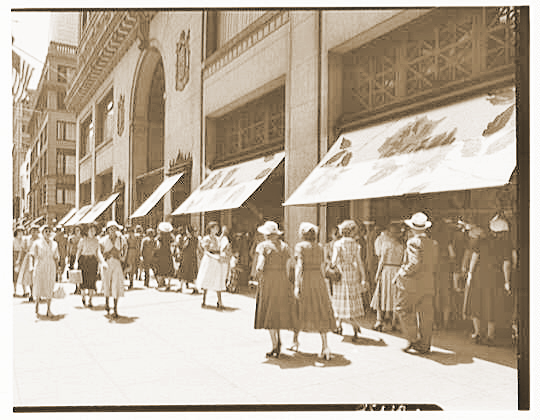 Fifth Avenue is one of the world’s most famous shopping streets in the world.

Starting south from Washington Square at Waverly Place, below 8th Street, all the way to 143rd Street, in Harlem. But it’s between 49th and 59th Streets is where the flagships are found.

The draw to the street has been the famed department stores. These emporiums were created by men with extraordinary vision and drive. From humble beginnings to world class shopping, Fifth Avenue is truly a Cinderella story.

With Fashion Week upon us, let’s look at how Fifth Avenue began.

Lord & Taylor was also the first department store project of architecture firm Starrett and Van Vleck, which would go on to design Saks Fifth Avenue and Bloomingdale’s.

Saks was the first New York department store to formalize the idea of window displays, and nearly one century later, its holiday windows, conveniently located right across from the Rockefeller Center tree, still generate plenty of buzz, much like its founders decades ago.

The store was founded in 1913 in Greenwich Village by Louisiana-born milliner Henri Bendel, who boldly registered his own trademark and developed the signature brown-and-white striped hat box and bag that still define the brand today. He was the first to open a retail shop in the neighborhood, which was primarily residential buildings at the time.

But today’s Upper East Side incarnation of the store was brought about by retail magnate Leslie Wexner, who purchased French perfumer Coty’s former emporium and fully restored it— with impressive René Lalique–designed windows and all—to house the iconic store that introduced Coco Chanel to America and made a little known illustrator named Andy Warhol famous.

The story of this beloved department store has a humble start in 1899, in Union Square.

Herman Bergdorf, an immigrant from France, opened a tailor shop and took 25-year-old New Yorker Edwin Goodman as his apprentice. In a matter of years, Goodman was able to buy his French partner out of the company—Bergdorf retired to Paris.

In 1928, the thriving business allowed Goodman to build the handsome marble-faced Beaux Arts structure that graces 58th Street today, built on the former site of Cornelius Vanderbilt II’s Fifth Avenue mansion. Soon the prolific Goodman was able to purchase the entire block, further expanding his store.
In 1990 the storied retailer even bought out a sizable space across Fifth Avenue for its men’s store.
Now that we’ve looked back let’s look forward…

At 59th Street, the former FAO Schwarz, 767 Fifth Avenue, will be a temple to athleisure: Under Armour.
Swiss watch brand Hublot introduced its largest flagship in the US, and the tallest in the world, to 743 Fifth Avenue.

Harry Winston’s historic townhouse is under renovation at number 718. At 57TH Street, Chanel is adding another jewel emporium, not on the Avenue, but at 5 East 57th Street, across from Nike and Tiffany.
At 55th Street, at 703 Fifth Avenue, HW will open a new watch store. At 54th Street, Coach is coming to the corner with a new flagship store at 685. Stuart Weitzman, in their newly designed boutique, will be in the same building.

At 52nd Street, the Cartier Mansion is preparing for the reopening of its flagship at 653 Fifth Avenue. The renovation began in 2014, opening a temporary storefront next to Apple, 767 Fifth Avenue.
At 49th Street, American Girl’s iconic flagship, at 609 Fifth Avenue, is relocating next year with a totally new store concept to 75 Rockefeller Plaza. At 45th Street, the NBA Store opened at 545 Fifth Avenue, combining basketball memorabilia with technology in a new interactive format.

Fifth Avenue, as we know it, is expanding to the south. The momentum is pushing towards that other classic retail corridor, 34th Street, with the turn at the Empire State Building, and leading shoppers back to where it all started at Macy’s in Herald Square.

At 41st Street, G-Star Raw and Muji are now open at 475 Fifth Avenue, right under the offices of Women’s Wear Daily.

The space is being opened up to the street with a glass façade joining all the three floors, after the legacy tenants finally moved out.

On the ground floor was JS Sutton & Sons, a tourist shop, which had been there since 1933. Going back a few more decades, and apropos for New York Fashion Week, one of the building’s original tenants, from 1906, was the Fashion House of Harry Angelo Company, one of the city’s biggest importers of Parisian couture.

Students were paired with designers to create the projects which will be on display up and down Madison during New York Fashion Week.