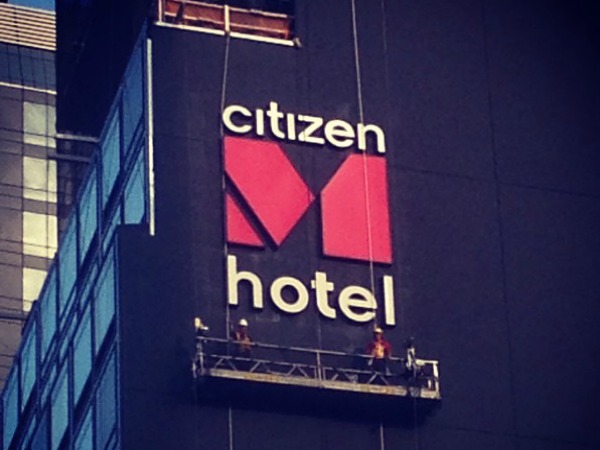 citizenM New York, the first citizenM hotel in the U.S. — the M stands for “Mobility” — has opened near Times Square, just off the corner of Broadway and 50th Street.

According to MADGI principal Richard J. DeMarco, AIA “The hotel is modern, elegant, and high-tech, in keeping with the chain’s aesthetic and branding as a whole. The design team focused on optimizing space and quality, while maintaining citizenM’s scale and design standards.”

MADGI worked with DeSimone Consulting Engineers to develop an unusual concrete structure that would accommodate the interior space requirements and the difficult site.

The curtain wall system was imported from Italy and consists of varying hues of blue and green. The top of the building was fitted with an ultra large LED video screen that wraps around the bulkhead above the rooftop bar.

Brack Capital Real Estate (BCRE), a global real estate investment and development company, developed the citizenMHotel New York. “It has been rewarding to partner with such a forward-thinking brand as citizenM and to help provide a platform for their U.S. introduction,” said Isaac Hera, chief executive officer of BCRE-USA. “We hinge our development philosophy on creating unique properties that add value to the landscape, and citizenM certainly furthers this goal. Brack Capital looks forward to the opening of our latest hotel property and we continue to seek strategic development opportunities in New York, as well as across the country.”