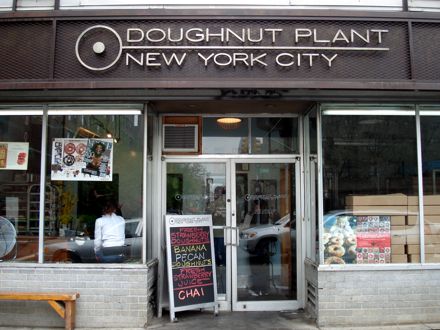 The well-known Manhattan bakery, Doughnut Plant, just signed a lease to open their first Brooklyn location in the Prospect Heights neighborhood of Brooklyn at 245 Flatbush Avenue.

The triangular building, which was built in the 1930s and was previously occupied by Yummy Taco, is located between Bergen Street and Sixth Avenue.

Famous for handmade doughnuts such as their signature crème brûlée doughnut and square filled doughnut, Doughnut Plant has existing locations in the Lower East Side, Chelsea, along with nine Tokyo locations. Doughnut Plant expects to be open for business by October 2014.

Doughnut Plant will be on the Flatbush Avenue retail corridor just two blocks from the Barclays Center and three blocks from the Atlantic Terminal Mall, which is home to tenants such as Target, Marshalls, Victoria’s Secret, Uniqlo, and Best Buy. Shake Shack and Parm are scheduled to open on the Avenue in the coming months.

“It’s exciting to be able to bring this iconic bakery to Brooklyn,” says Dan Marks, VP of Investment Sales & Leasing at TerraCRG, who represented the landlord along with Associate Joey Terzi. “The fact that this Manhattan original is moving to Brooklyn, along with restaurants like Shake Shack and Parm, really speaks to the strength of the market around the Barclays Center.”

Sales get underway at Silverstein’s 30 Park