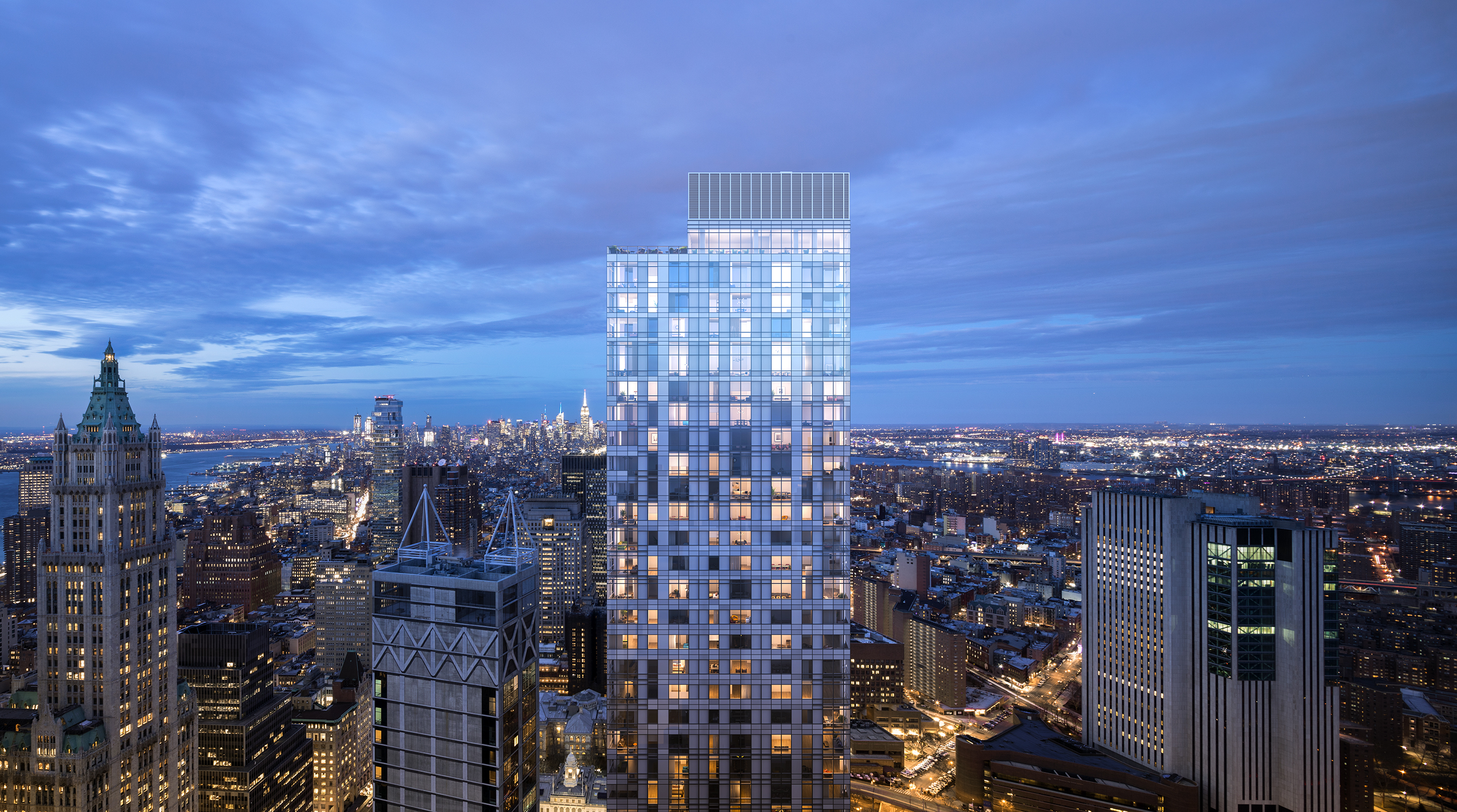 Amid the tangled warren of roadways that make up the Financial District, the lone narrow block of Dutch Street could easily be mistaken for an alley or driveway in the unknowing glances of passersby.

Although it has been a literal part of New York’s geography since colonial days, Carmel Partners has put the thoroughfare on the map properly by erecting a building taller than the street is long.

True, soaring glass towers are no new sight on the southern tip of Manhattan, even those of the residential variety, as the district has evolved into one of the more prolific mixed-use neighborhoods in the five boroughs. However, 19 Dutch has a singular identity as the lone luxury rental development in the area and for its commitment to Dutch sensibilities.

“We took the name, 19 Dutch, to heart and tried to create something that embodied Dutch style and elegance,” said Jason Hill, the Douglas Elliman agent leading the marking effort at the site.

For the project’s architect, Gerner Kronick + Valcarcel, and the interior designer, Colum McCartan, that concept didn’t mean clogs or windmills but rather the “whimsical romance” of the Dutch Golden Age.

That manifested itself in ways both physical as well as academic, such as the indoor-outdoor balance of the 64th-floor sky lounge and the overall focus on wellbeing.

McCartan also pointed to etchings, patterns and other artifacts recovered from Dutch Golden Age, the period during the 17th century when the Netherlands reached its peak of cultural and economic influence. He pointed to the convergence of paintings by renowned Dutch artist Johannes Vermeer and the use of Delft tile in the lobby, with Delft being the name of Vermeer’s hometown.

“[W]e combined the two,” McCartan wrote in an email. “For example, we printed old 17th century etchings of Nieuw Amsterdam onto ceramic tile and created our own version of Delft.”

Residents and visitors are welcomed with by a custom-made, Netherland’s style crest featuring two lions and, of course, tulips, as well as TULP 19, a bespoke scent crafted by the fragrance maker, 12.29, which is present in the lobby and throughout the building’s common areas. Tenants are even given a bottle of TULP 19 with their move-in package, part of a branding campaign conceived by IF Studios.

Standing 770 feet tall, the 64-story tower features 483 units. Currently, Douglas Elliman Development Marketing is leasing floors five through 29, which feature studios starting at $2,615 a month, one bedrooms starting at $3,545 and one bedrooms with a home office starting at $4,360. Two-bedroom units start at $5,145.

The building will be leased in waves as the higher floors are completed, Hill said, adding that the penthouses and amenity spaces should be completed by early next year.

Hill said Carmel took a number of steps to distinguish its offerings from other rental properties in the city and bring the final product in line with the various condo projects sprouting up in the Financial District.

“In New York, we are used to seeing Vanities in hi-rise living being square edged and relatively simple and mundane,” McCartan said. “There is almost no space in these bathrooms to expand the size or greatly vary the form without sacrificing such priceless real estate as counter space – so, we created softer edges … that would deliver a more visually appealing distinction of making it appear more like an elegant piece of furniture than a generic ‘bathroom counter.’”

The units offer a variety of sightlines, including an east-facing line that has views of the Brooklyn, Manhattan and Williamsburg bridges as well as northern lines with Midtown exposures. The northwest side features the obligatory World Trade Center vista, complete with the spikes of the Oculus.

The south side, though crowded with non-distinct office buildings, also benefits from the collection of lower-rise buildings around it, avoiding the claustrophobic trappings so many high-end towers inevitably fall prey to.

Amenities include a 24-hour lobby concierge and resident services co-ordinator, daily hospitality cart with coffee service and two spacious bike rooms on the second floor. The third will boast a media center, a game room, a club lounge, a demonstration kitchen and a curated library compete with its own fireplace.

Fourth floor facilities will include a children’s playroom and a fitness center, while the 64th floor is home to the indoor/outdoor lounge, which also features a fireplace.

Throughout the building, Hill said the goal is to strike a balance between opulence and obtainability.

“We wanted the interior to feel organic but also custom made,” he said. “The use of stone in the lobby, for example, gives you a sense of balance between grandiose elegance and clean lines that isn’t always easy to achieve.”