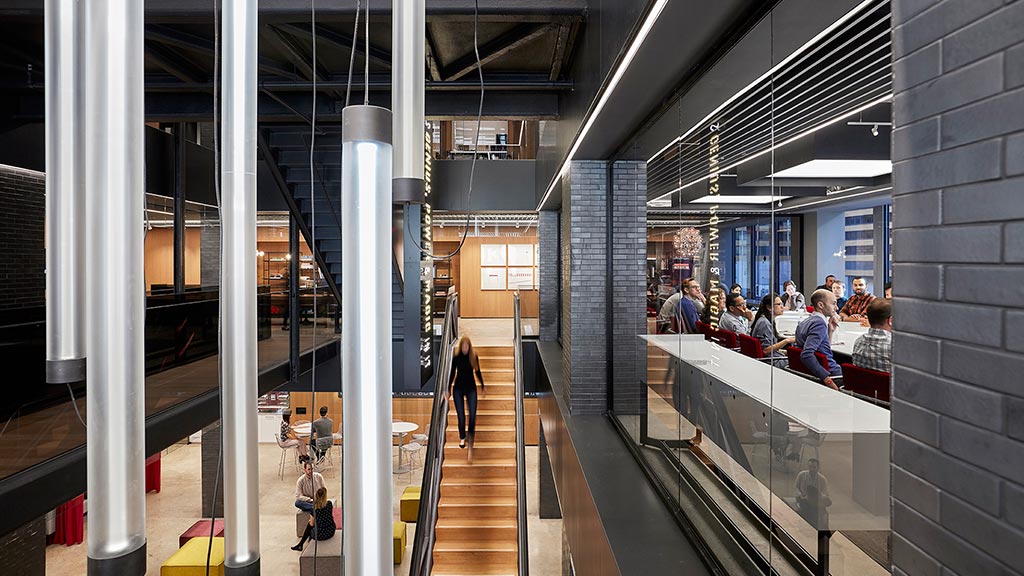 Gensler, the global design firm, has relocated its 600+ employees to 1700 Broadway after more than 25 years in Rockefeller Center.

Gensler’s designers converted the office into an architecturally significant space with elements that add up to a new way of working. Gensler occupies 120,000 square feet in the Theatre District, taking up the second through the sixth floors of a 42-story office tower on Broadway between 53rd and 54th streets, allowing for the firm’s continued growth.

The lower levels of the building provide a dynamic vantage down Broadway, bringing a street-level energy into the space. According to local news outlets, the move signifies a larger real estate trend of “Midtown’s increasing appeal to creative tenants.”
An agile floorplate became an opportunity for the firm to build creative communities on each floor. They’re linked together by an internal staircase, which is surrounded by collaboration and meeting spaces.

The most dramatic branded moment is the 20-foot marquee that marries digital design with traditional signage. One side of the marquee features a LED screen with generative design and ambient graphics that are activated by people moving throughout the space.
On the fifth floor, Gensler created a new design center that melds a traditional library function with the firm’s technical specifications team. This allows designers to access building materials, technical expertise and inspiration all at the same time.

The ratio of collaboration spaces and heads-down workstations was directly influenced by a key finding from Gensler’s 2016 Workplace Surveys. The research shows that innovative employees have choice over when and where to work. In an effort to maximize innovation and creativity, the design includes an abundance of amenities, conference rooms and specialized meeting areas. The workplace features sit-stand desks and a bike room to encourage health and wellbeing; a digital lab, model shop, design center, visualization theatre, work cafés, and “collaboration avenues” – flexible spaces that celebrate and enable the design process.

Building on the 2016 Workplace Survey finding that the most innovative companies invest in the individual, the firm implemented smart systems to monitor how each employee interacts with the workplace. The system uses first-in-class sensor and analytics platforms that speak to the firm’s long-term sustainability goals, while improving the comfort of workspaces and the efficiency of the employees who work in them. An “Internet-of-Things” system shares information on the movement of people, informing designers on how people are utilizing their desks, conference rooms and collaboration areas.

“Broadway serves as a lifeline running through our city, knitting together the unique fabrics that make up New York – it could be called the most iconic street in the world,” said Rocco Giannetti, Co-Managing Director of Gensler’s New York office. “Our future is multi-dimensional and we sought a location that celebrates that.”
The move was led by Gensler’s Managing Directors Rocco Giannetti and Julia Simet and Regional Managing Principals Robin Klehr Avia and Joseph Brancato. CBRE’s Mary Ann Tighe, Ken Rapp, Timothy Dempsey and Sinclair Li represented the move.