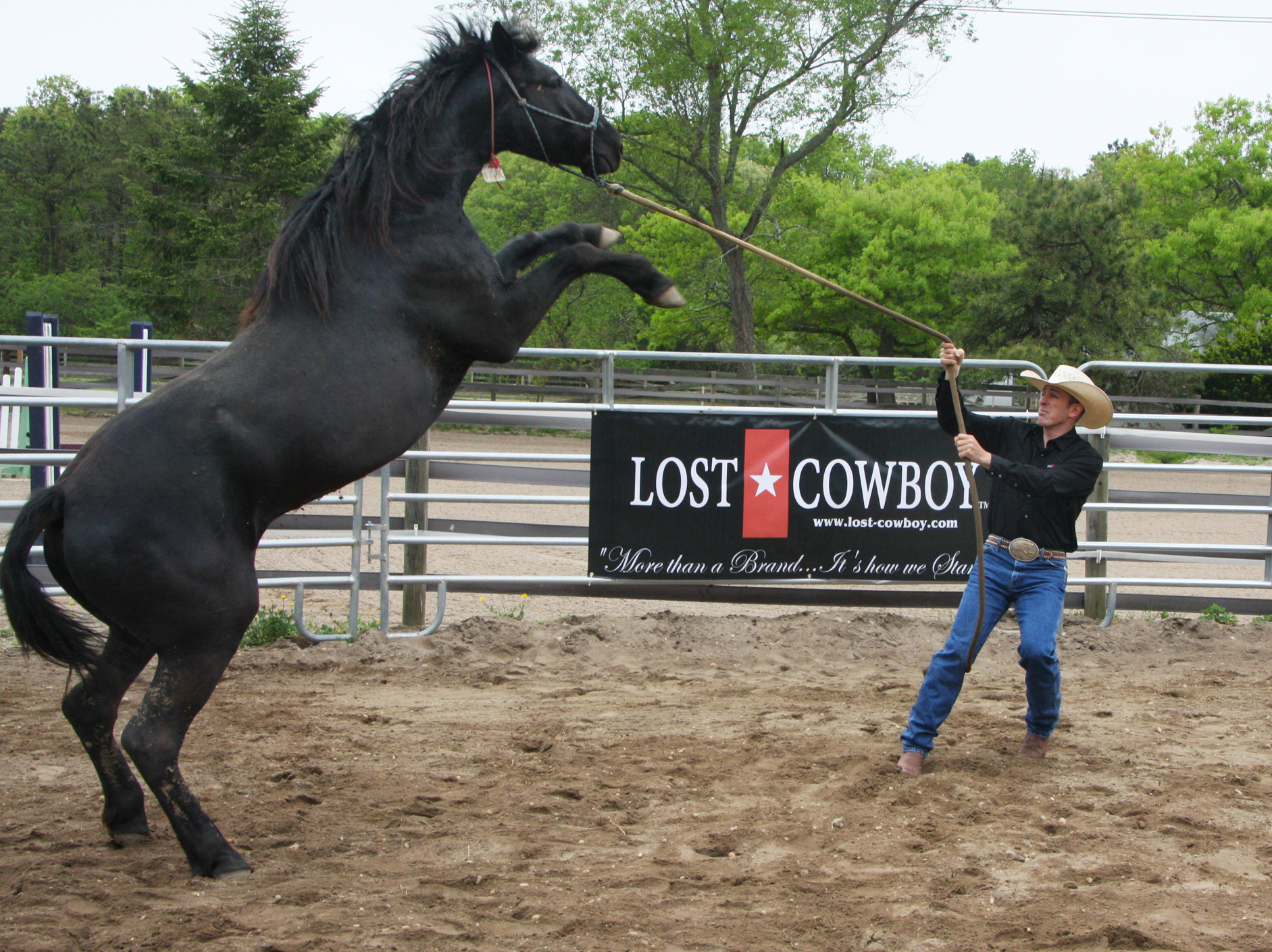 A rescued four-year-old wild Mustang from a free-roaming herd in the American West arrived at a farm in Holtsville, N.Y., for training in anticipation of adoption.

Lost Cowboy fashion brand’s founders, and senior executives of New York City-based Stalco Construction, Scott Pavick and Kevin G. Harney, organized and sponsored the horse’s transfer from one of the Bureau of Land Management’s (BLM) holding facilities, where rounded-up mustangs are held as a means of population control.

The mustang, a four-year-old gelding, arrived in Holtsville on Long Island following a long drive from BLM’s temporary facility in Illinois.

The animal was greeted for the first time by its trainer and sponsors, who, as experienced riders, will also assist in the training.
Upon the horse’s arrival, Harney and Pavick held a naming ceremony and selected the name Lost Cowboy. The hores is 15.2 hands high (a hand is approximately four inches) and sports a striking black color with brown undertones.

It was captured on the Nevada-California border and is a descendent of the horses brought to the New World by the Spanish explorers, animals released by the U.S. Cavalry during the World War One to breed war horses in the wild, and local ranch horses.

“We are deeply moved by the presence of this majestic animal that symbolizes the American culture, heritage, values, and perseverance,” said Harney. “It is our privilege to help save Lost Cowboy and we hope to enlist more supporters in preserving and rescuing American mustangs.”

The foundation’s mission is to increase adoption of wild horses held in the BLM’s corrals and long-term holding facilities. The BLM is currently responsible for more than 50,000 horses in short- and long-term care.

Lost Cowboy will undergo a 90-day training in preparation for a skills show and competition, which will be followed by an adoption auction.

The MHF’s show will take place on September 22-23 at the Mountain Springs Arena in Shartlesville, PA. All adult mustangs will be available for adoption after the event.

Based in Shirley, N.Y., the firm recently released its first collection of custom-designed T-shirts. Harney and Pavick, both avid horse riders and amateur penning and roping competitors, met as colleagues at Stalco, a prominent New York construction firm, established by Harney and his business partner.

Harney implemented a set of ethical principles at his construction firm, called Cowboy Ethics – The Code of the West, which was developed by Jim Owen through his Austin, TX-based Center for Cowboy Ethics and Leadership.

Cliff Schadt, Jr. was born and raised in Mattituck, NY on Long Island. He left home at 16 to pursue adventure and work in the American West.

Cliff has competed in numerous rodeos and worked for and managed many ranches throughout Oregon, Nevada, Wyoming, and Montana.

He recently returned to Long Island and established a Common Thread Horsemanship school in Holtsville, NY. Cliff is a practitioner of the gentle, thoughtful “natural horsemanship” method of horse training.

Sponsored by Lost Cowboy, Jace Angus is a professional saddle bronc rider, who is currently ranked 27th in the world by the