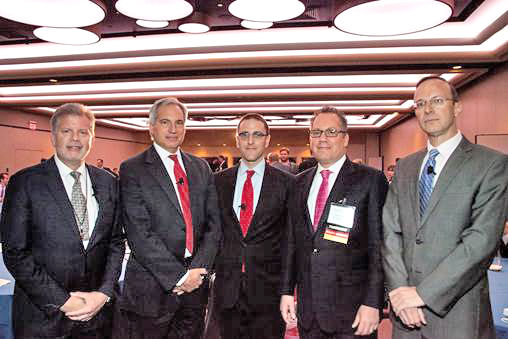 Metropolitan Business Network (MBN) hosted a panel on what has been called the most exciting economic development project ever undertaken in New York City.

The event focused on how the establishment of the two million square foot applied science and engineering campus on Manhattan’s Roosevelt Island will dramatically increase New York’s potential for economic growth.

Through a request for proposals issued by the Economic Development Corporation, higher education institutions around the world were invited to propose a program that would breath life into the technology sector in the city.

In his final State of the City address, Mayor Michael Bloomberg called the new Roosevelt Island campus “maybe the most exciting economic development project our city has ever undertaken.”

The construction timeline for the Roosevelt Island campus of the new Cornell-Technion technology graduate school, Cornell NYC Tech, spans decades. But the first academic building is on track to open for business in 2017.

Moderated by Michael Colacino, president of Savills Studley, the MBN panel focused on corporate co-location, designed to foster interactions and collaboration between the tech community, businesses and Cornell Tech students and faculty.

The first phase of construction calls for a 150,000 s/f corporate co-location building, of which an initial 100,000 square feet will be available to corporate tenants. By the time the two million s/f campus is complete, the swath of office space set aside for the school’s corporate partners could be as large as 800,000 square feet.

This element of the campus plan is inspired by other technology-focused educational institutes, which tend to have industry nearby. In the 25-mile radius surrounding Technion’s campus in Israel, every technology company in the world seems to have an office.

Co-location tenants will pay rent to the school, and the space will only be available to companies related to the school’s entrepreneurial, technology-focused mission.

SUNY gets an energy boost