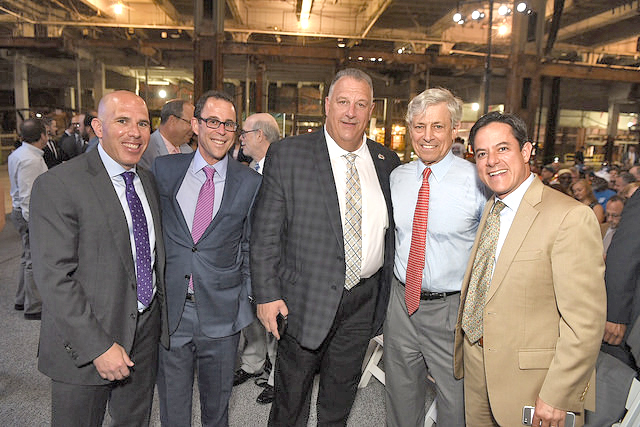 Governor Andrew M. Cuomo announced the start of construction that will turn the James A. Farley building into a world-class transportation hub for the 21st century.

The Farley Building redevelopment into the Moynihan Train Hall will create a new 255,000 s/f train hall for Long Island Rail Road and Amtrak passengers and increase total concourse floor space in the Pennsylvania Station-Farley Complex by more than 50 percent.

The Farley Building will also house 700,000 s/f of new commercial, retail and dining space within the mixed-use facility.
$1.6 billion project is expected to create over 12,000 construction jobs and 2,500 permanent jobs.

“We’re investing $100 billion, the largest amount ever invested in the history of the State of New York in infrastructure. Doing projects all across the nation, all across the state, replicating projects that are the first and the best from LaGuardia Airport, which will be the first new airport built in 25 years.

“The John F. Kennedy airport, replacing the Kosciuszko bridge… the Tappan Zee Bridge after 25 years, airports all across Upstate New York. Investing in the subway system, $8 billion, and pledging $400 million to fund the emergency repair program.

Skanska is rehabilitating the old post office building with a renovation that covers civil, structural, architectural, mechanical, electrical and plumbing, as well as demolition of existing structural and architectural elements, including asbestos and lead abatement.

Historic restoration of the entire exterior of the Farley Building and adjacent Annex Building is also included.

During the first phase of construction, Skanska managed the complete renovation of the West End Concourse. The concourse now extends from Platform 3 to Platform 11, allowing for a much bigger space that sits above the existing platforms.
Since the Governor’s original selection announcement in September 2016, Skanska USA has demolished 6,000 tons of concrete and removed approximately 800 tons of steel, as well as an additional 400 tons of hazardous materials.

To allow for future sunlight on the Concourse level from the new skylights, one acre of concrete and steel flooring has been removed.

Restoration has now begun on the exterior façade and the interior courtyards and on 31st Street and new openings to accommodate escalators carrying passengers to the platform level have been initiated.

Three of the six underground train platforms are shielded and ready for the demolition process to begin.