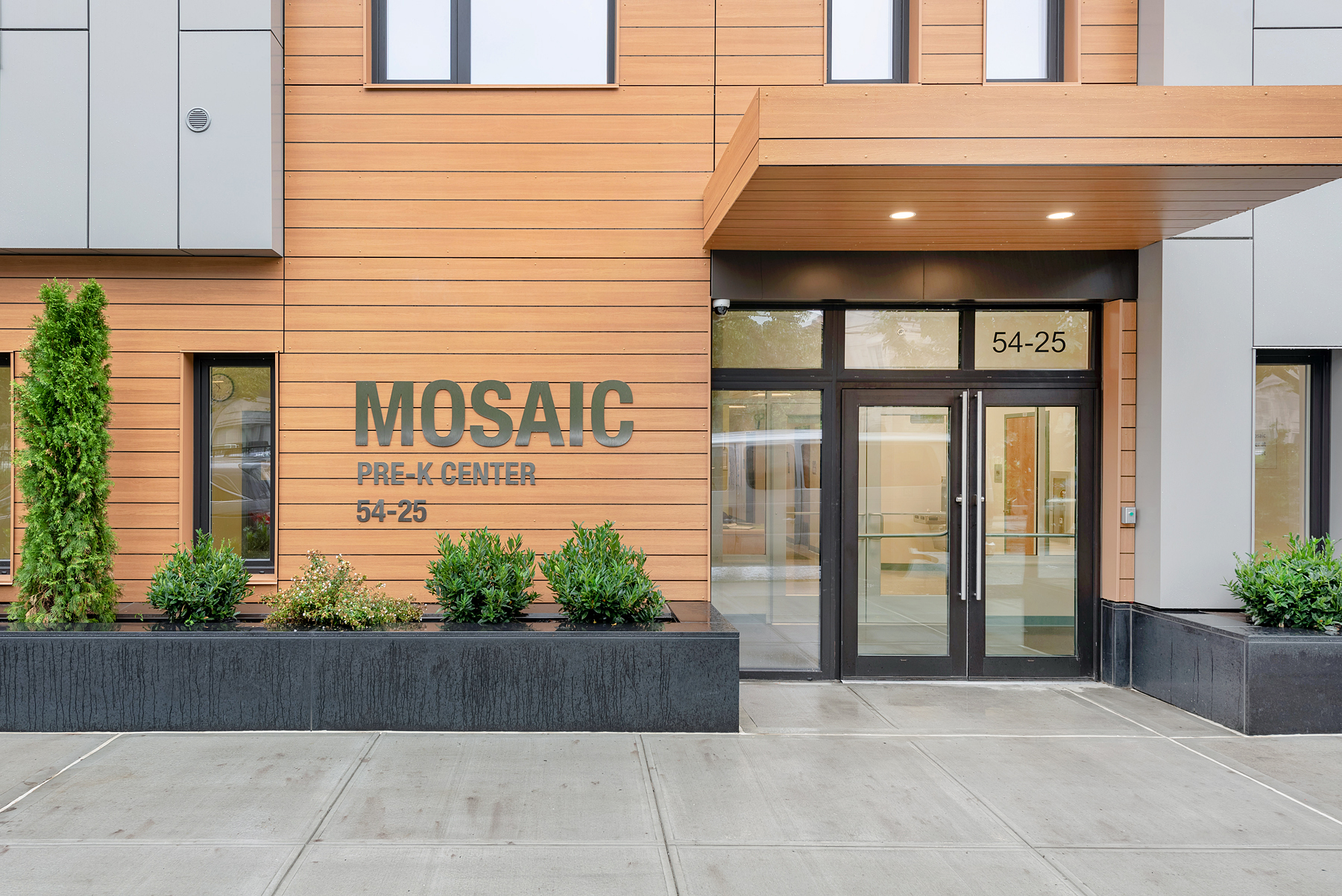 Located in the Corona section of Queens, UPK Q368 – also known as the Mosaic Pre-K Center at 54-25 101st Street – is situated near LeFrak City.

Craig Tooman, AIA, LEED-AP, the CTA principal in charge of the Pre-K project, commented, “The 4,700 s/f, three-classroom facility on the ground floor of the Senior Residence uses only one-eighth the amount of energy a typical pre-K of a similar size would use.

“It houses a general office, a staff room, a parents/community room, an infirmary, a custodial space, a lobby, and a warming pantry that is equipped with a small kitchen area with a milk chest, a warming cabinet, and a connected food-storage room.”

There is also a 1,200 s/f play yard. Students will populate the classrooms for the first time this coming school year, beginning September 2018.

The HANAC Corona Senior Residence is expected to achieve Passive House Certification this summer, which will confirm it complies with environmentally forward Passive House Design standards.

Passive House Design requirements include 75 percent energy savings in comparison to typical properties as well as significant environmental benefits for the physical health, comfort, and overall well-being of those who live or work in the facility.

The New York State Department of Health (DOH) has granted project approval to HealthAlliance of the Hudson Valley for the expansion and enhancement of its hospital on Mary’s Avenue in the City of Kingston.

The DOH approval of HealthAlliance’s Certificate of Need application is the latest and final administrative milestone for the $92.9 million project.

The new hospital will feature the addition of a new, two-story, 79,000 s/f building adjoining the current facility, as well as a full renovation of 48,000 s/f of space within the existing hospital.

Key components of the new 175-bed facility will include a 25,000 s/f emergency care center that will incorporate special services for cardiac observation and behavioral health; a newly constructed 10-bed intensive care unit, along with a six-bed medical “stepdown” unit, providing an intermediate level of care between the ICU and the new hospital’s medical-surgical wards. Nearly all of the patient rooms will be private.

BlackRock’s U.S. Real Assets platform, which manages $17 billion in real estate and infrastructure assets in the United States, has adopted a Responsible Contractor Policy, which will apply to assets and companies in which funds managed by BlackRock Real Assets have a controlling interest.

Under the policy, BlackRock Real Assets will support the selection of “responsible contractors” who deliver high quality services and appropriately train and fairly compensate their employees for construction, maintenance and operating services.

“The demand for infrastructure and real estate investments in the United States presents a tremendous opportunity both for our clients and for all of our partners,” said Jim Barry, Chief Investment Officer of BlackRock Alternative Investors and Global Head of BlackRock Real Assets.

“Core to BlackRock Real Assets’ investment process is the integration of ESG considerations, including sound governance practices, which we believe are essential to building resilient portfolios for our clients.”

Chen is the lead architect behind the long-anticipated transformation of the former Rotterdam Post Office into a new mixed-use complex that will include two public plazas, a Kimpton hotel, high end restaurants, cafes and retail.

The lecture, which was attended by hundreds of design enthusiasts, was the first time in many years the Post Office had been open to the public.

The site will be open through June for tours and contains a number of architectural exhibitions. The site will then be closed for demolition and renovation in anticipation of the new mixed-use project designed by ODA.

The keynote by Chen focused on lessons the NY-based practice has learned in the last decade building more than 50 buildings in the US, specifically regarding adaptive reuse and the importance of creating vertical communities in the face of exponential urban growth.

Kimmerle Newman Architects has been recognized by the New Jersey Business & Industry Association for its design of SCYNEXIS’s new headquarters with the New Good Neighbor Award.

SCYNEXIS recruited Kimmerle Group to furnish, brand and interior design the entirety of the office and plan ahead for the inevitable growth spurt in the company’s future. KNA worked closely with CBRE to find the right location and build it out accordingly.