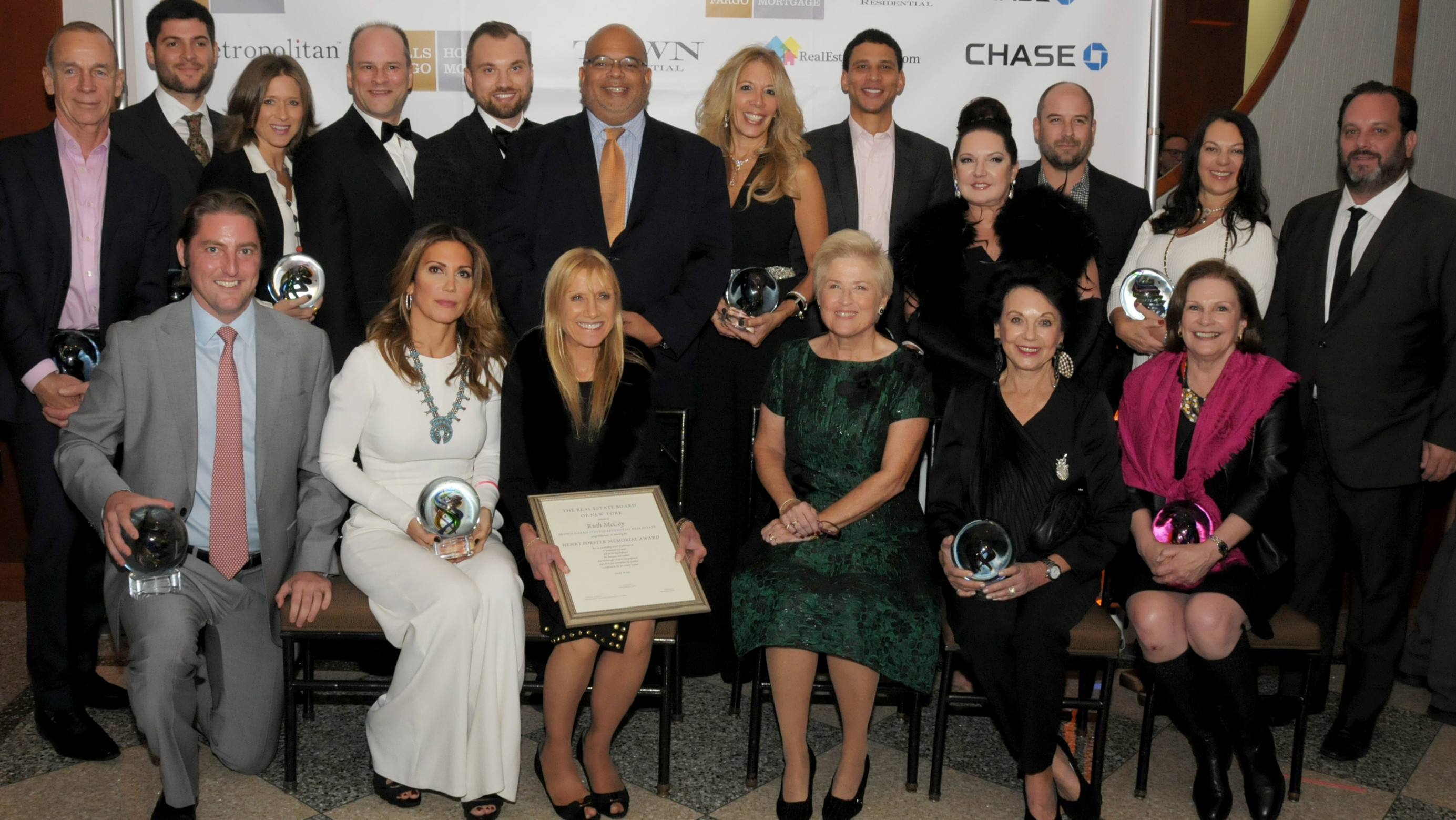 The 28th annual gala was held at Pier Sixty at Chelsea Piers and drew over 500 agents, owners and developers  who were entertained following the awards presentation and dinner by superstar Gloria Gaynor.

A cocktail hour ahead of the award presentation was briefly interrupted by a small group of loud protesters who used a back-door entrance to infiltrate the dressed up crowd, waving placards denouncing the “gentrification of Brooklyn.” The hoopla was quickly shut down by security and police, who removed the protesters without incident.

The Night at the Disco-themed event highlighted the achievements of the City’s most accomplished residential dealmakers and their contributions to the real estate industry, and raised funds for REBNY’s Member in Need Fund, which provides grants to residential brokerage members who are experiencing a financial crisis or hardship.

“Every day throughout New York City, our members go above and beyond to serve the needs of our city’s residents while demonstrating exceptional professionalism, leadership and service to our industry and consumers alike,” said John H. Banks, III, REBNY President. “It is an honor to celebrate their accomplishments, while raising funds to support our members in need.”

“We congratulate the winners on their much-deserved awards, which represent the consistent and impressive hard work, ethical conduct and ingenuity of all REBNY members,” said Jeffrey Rothstein, Executive Manager of Sales for Douglas Elliman’s West Side offices, and Co-Chair of REBNY’s Residential Deal of the Year Charity & Awards Gala Committee.

“Each winner’s dedicated time and efforts towards pursuing and achieving excellence in their business dealings, while contributing generously to our industry, are applauded and greatly appreciated by our community,” added Barbara Fox, President of Fox Residential Group and Co-Chair of REBNY’s Residential Deal of the Year Charity & Awards Gala Committee.

Ruth McCoy, Executive Vice President and Managing Director of Sales for Brown Harris Stevens’ East Side offices, who was honored with The Henry Forster Award for Lifetime Achievement.

This award is presented to an individual who has a long-standing reputation for excellence in residential real estate, is a top-producing agent who displays outstanding ethical conduct in the profession, and contributes to cultural, charitable and community organizations outside and within the industry.

McCoy works closely with Brown Harris Stevens’ President Hall Willkie and Executive Vice President Peter Marra in supervising the company’s East Side offices where over 120 brokers specialize in the sale of cooperatives, condominiums and townhouses.

Since starting her career in residential real estate in Manhattan in 1982, McCoy has worked as director of sales and leasing and handled corporate relocation and co-op and condominium conversions. She was previously Executive Director of Feathered Nest where she oversaw day-to-day operations as well as long-term planning and projections.

Her prior Manhattan real estate experience includes her work with Douglas Elliman, William B. May and the developer David Walentas. An active member of REBNY, McCoy serves on several committees: the Residential Branch Managers Committee, Brokerage Eastside Committee and Deal of the Year Charity & Awards Gala Committee. She has also lectured, conducted seminars and teaches continuing education for New York State licensed sales agents and brokers.

Douglas Wagner of Bond New York was presented with The Eileen Spinola Award for Distinguished Service.

This award – named for REBNY’s former Senior Vice President of Education and Brokerage Services – honors a REBNY broker or agent who has made major contributions to the REBNY community by donating their time, expertise and knowledge in the areas of education, ethics and professional services for the betterment of the real estate industry.

At Bond New York, Wagner supervises the Sales, Leasing and Commercial Divisions and has been instrumental in the creation and development of Bond University, the company’s education program, offering professional development opportunities to agents at every level of their career.

Soon after first starting his career as a Manhattan rental agent in 1996, he was training other agents and running a mid-sized rental brokerage downtown. He served as President of Benjamin James Real Estate for nine years, during which he developed the rental company’s marketing brand, added its coop and condo sales component and supervised the lease up of new developments in Manhattan.

Wagner sits on the Board for the REBNY Listing Service (RLS); has served on REBNY’s Ethics and Professional Practices Committee and as chair of the Residential Rental Committee for most of the past fourteen years; and previously served on REBNY’s Board of Governors and Residential Board of Directors. Wagner frequently teaches continuing education at REBNY and authored its Rental Industry Best Practices, which were adopted into the organization’s regulations in 2006.

The Most Promising Rookie Salesperson of the Year Award for 2016 was bestowed to Mirza Avdovic of Keller Williams NYC for his standout accomplishments within his first years working in New York City’s residential real estate market.

The winners of the residential sales and rental awards are chosen anonymously through a judging committee. Only members of firms who have not submitted deal entries are allowed to judge.