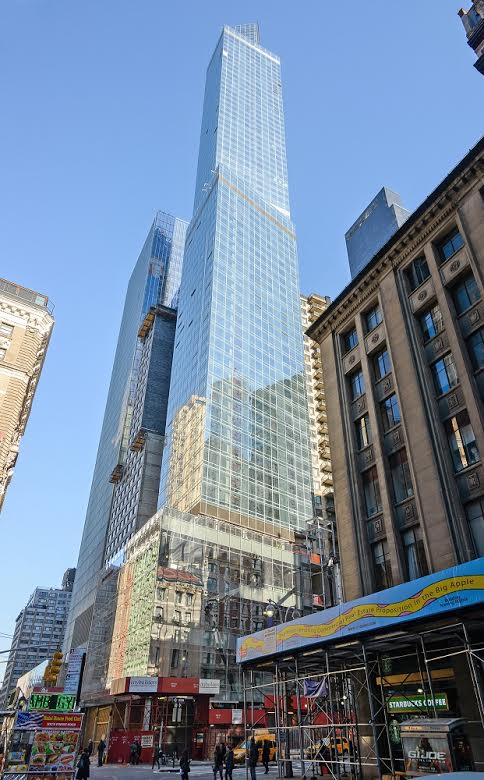 CNY Group, LLC (CNY) has completed the construction of the tallest standalone hotel in the western hemisphere. 1717 Broadway / Residence Inn and Courtyard by Marriott is located at 54th Street and Broadway in New York City. The 70-story tower was finished two months ahead of schedule in December 2013, allowing Marriott to open the hotel to guests on December 29, 2013.

Standing at 753 feet, the Central Park Marriot is not only the tallest Marriott in the world, but the tallest standalone hotel of any in the Western Hemisphere. In addition, the skyscraper’s 30:1 FAR is the highest of any building in the history of New York City.

The $160-million structure is comprised of two hotels; a 378-room Courtyard by Marriott and a 261-room extended-stay Residence Inn by Marriott, which will serve as flagships for the chain. The $160-million project features a total of 639 rooms, as well as a fitness club, lounges, bar and restaurant establishments, a retail store, business center, conference center and outdoor terrace, all within a 371,000-square-foot space.

Under CNY’s leadership, project management and execution, the 70-story project was completed significantly ahead of the projected schedule. The original estimate called for the hotel to be completed in March 2014, but was subsequently accelerated to meet Super Bowl demand in early February. The projected completion date was moved up to December, opening in time for New Year’s holiday festivities in Times Square. The firm received a bonus from the building owner, Granite Broadway Development, LLC, for completing the project in record time. Marriott Ownership along with other senior Marriot Executives and their families were able to stay at the hotel, which had already been fully-operational for over a month, during Super Bowl weekend.

CNY was selected to manage the construction of this record-breaking project due to the firm’s proven track record of finishing large-scale projects ahead of schedule and under budget. In pre-construction alone, CNY achieved a 16% reduction of the original budget through design assistance, engineering input and global sourcing.

The project was particularly complex because it required some unusual approaches to extraordinary logistical challenges. The site is located on a block that included New York City’s second-highest concentration of construction after the World Trade Center, with three major buildings being constructed simultaneously.  Two of these buildings, the Marriott being one of them, were built on the western elevation. CNY coordinated logistics, overhead protection, material handling, crane ops and hoist operations with its neighbors and DOB Best Squad so construction of these separate projects could progress seamlessly. According to Dennis Prude, Director of Field Operations for CNY, this project is a reflection of a highly productive workforce and efficient management.

The design of the building also posed architectural and construction challenges. “The most challenging aspect of the design was fitting close to 400,000 square feet of building on a 10,000 site area. We had to design the building to meet zoning requirements and used the daylight evaluation method to fit a large volume onto a small site,” said the building’s architect Nobutaka Ashihara. “Usually you build from the bottom of a building straight up, but in this project consisted of four separate design elements – a podium containing  a public area, the Courtyard Hotel tower, the Residence Inn Hotel tower and the mechanical penthouse with a two-story Damper to stabilize the building. These four elements are rotated in different directions and twisted to minimize the shadow of the building casted to the surrounding street and provide great views from the building of Times Square, Central Park and the New York City skyline. We worked very well with CNY and were always able to help one another in terms of quality, cost and schedule control.”

To ensure all the safety of all workers, neighboring construction crews and the general public, CNY implemented a state-of-the-art cocoon protection system that rose up with the building. This type of safety is not required by the New York City Department of Buildings, but CNY felt that is was necessary to secure the jobsite to the greatest of its ability.