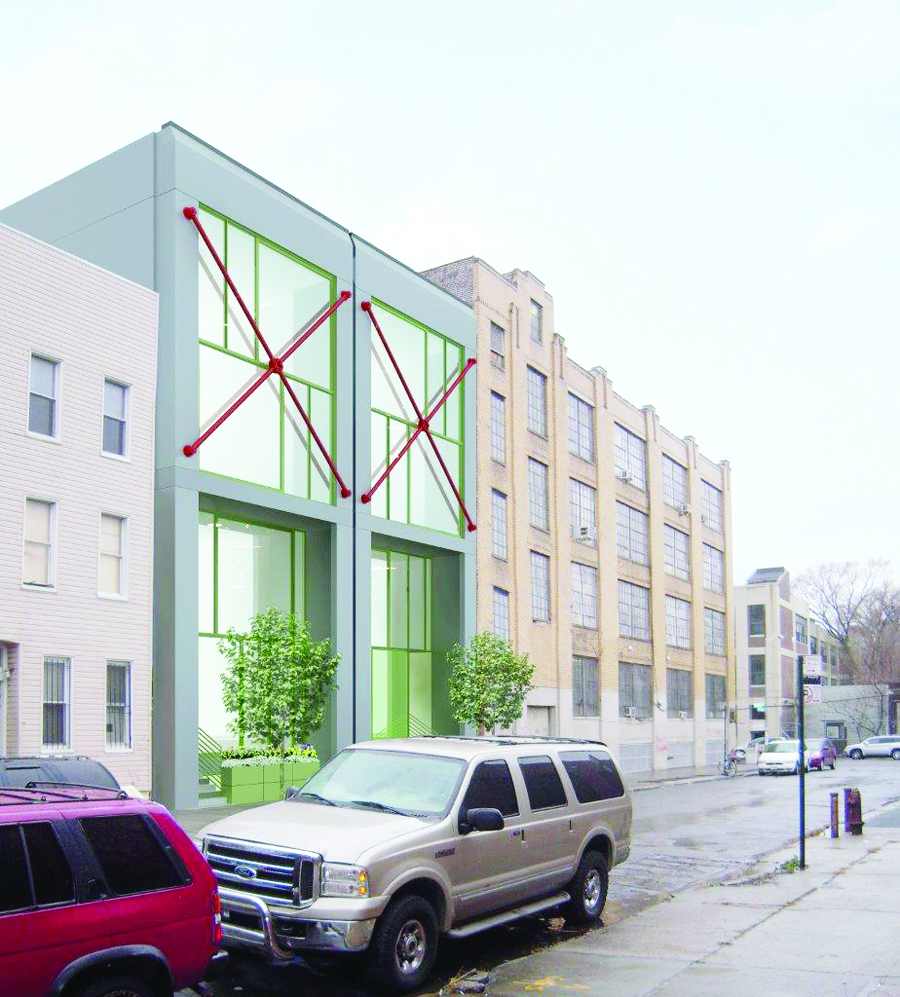 Gene Kaufman Architect, P.C. (GKA) has been chosen by owners/developers Ted and Marianne Hovivian to design a new building on Grattan Street and Harrison Place in Bushwick devoted to artists’ lofts, galleries and retaily. 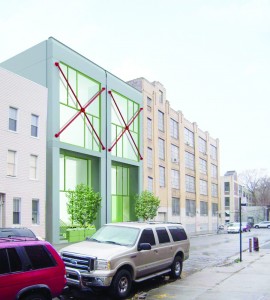 The project, which will be known as The AnX, is being developed as an extension or “annex” to the The BogArt, at 56 Bogart Street, which the Hovivians converted into artist production spaces in 2005 and has been home to a broad spectrum of artists and galleries ever since.

“The AnX is a unique and somewhat unprecedented project. There are scarcely any new ground-up developments dedicated to the arts and artists, and none when it comes to a townhouse scale. This project integrates the concept of 19th century European ateliers with 21st century technology, materials and amenities,” said Kaufman, founder of GKA.

“The building’s two stories and industrial façade reflect the neighborhood’s low-scale manufacturing roots while the huge windows at both the front and back of the building will flood the spaces with light.”

According to real estate experts, overflowing with over-educated and underpaid young “pioneers,” rapidly growing Bushwick is right behind Williamsburg in line to be the next hot neighborhood.

Intrepid house-hunters and entrepreneurs are following the immigrants and artists who first laid claim to the neighborhood in the early 2000s. More young professionals are moving into the neighborhood because of its close distance to the 2, 3, 4, 5, A, C, and Shuttle trains; new restaurants and shops; and major cultural institutions such as the Brooklyn Museum and Brooklyn Botanic Garden and, as a result, incomes and rents are rising.

Between 2011 and 2013, the number and price of development sites sold in Bushwick more than doubled, according to research compiled by Ariel. Most of the lots sold in 2012 and 2013 were relatively small and, as a result, smaller residential projects are being designed in keeping with the neighborhood’s low-rise character, explained Troop.
The Rheingold Brewery development is the largest of the projects currently planned. It will feature a complex of 10, eight-story buildings containing nearly 1,000 apartments, of which 30 percent will be affordable.

Several blocks away, Read Property Group developed Colony 1209, a 126-unit rental at 1209 DeKalb Avenue featuring a doorman, art-filled lobby, courtyard, communal roof deck, and gym. The units are being offered at $1,800 a month for studios, $2,000 for one-bedrooms, and $2,900 for two-bedrooms.

The developer picked up the property in 2012 for $6 million in a foreclosure proceeding and recently sold the building for $58 million.

Slate Property Group has also received approval to rezone 83 Bushwick Place from manufacturing to residential and is planning to build a 20-unit, market-rate residential development with luxury-level finishes.

And a four-story, three-family new residential development recently came online at 1099 Willoughby Avenue. Monthly rent was listed at $4,800 for one of the four-bedroom, 2.5 bath apartments.

Young professionals are enjoying the growing scene of restaurants and cafés in Bushwick — so many restaurants have opened that they’re showcased now during Bushwick’s Restaurant Week.

Artists have been at home in the community for years and annually host Bushwick Open Studios featuring more than 600 shows in artists’ studios, curated group shows, and performances.

Mr. and Mrs. Hovivian — developers of the new AnX who previously worked with GKA on the Rialto in Williamsburg — own and manage The BogArt, which has attracted a range of visual and multimedia artists as well as high-end galleries.

The site of The AnX is contiguous with 56 Bogart, allowing the Hovivians to expand their offerings to the creative community.

“Having purchased these properties in 1983, we have witnessed this neighborhood’s evolution first hand,” said Mr. Hovivian.

“When the manufacturing businesses began to leave that area and our building at 56 Bogart in the early ‘00s, we saw an opportunity to respond to the needs of the community and rebrand it as The BogArt and offer studios and workspaces to artists. We’ve attracted an incredible mix of creative tenants, and we want to be able to satisfy the growing space needs of these types of tenants and continue our support of the artistic community at The AnX.”

The AnX, which like the The BogArt is located across from the Morgan Avenue L subway stop, offers high ceilings, mezzanines and exceptional light.

Spaces will be tailored to suit the needs of individual tenants, and the building’s ground floor will feature restaurant and retail spaces.