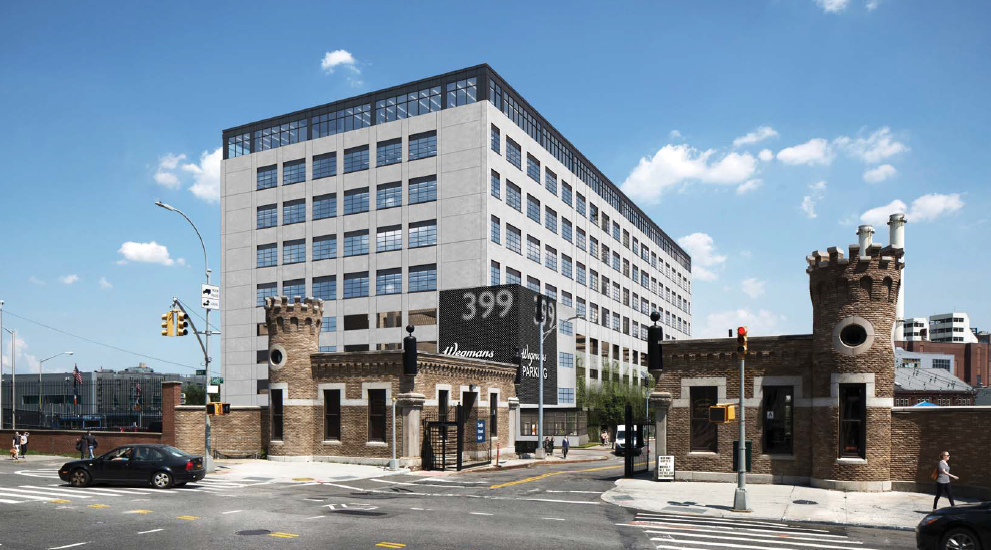 New York City is investing $40 million the the 399 Sands Street building it broke ground at alongside developer Steiner NYC and the Brooklyn Navy Yard Development Corporation.

The nine-story 399 Sands Street building will be home to 230,000 s/f of industrial and office space and a parking structure for 430 cars. The building, designed by Dattner Architects, will have its first four floors as a parking lot, floors five to eight as manufacturing space and the ninth floor as creative space. The parking garage portion is expected to be complete in 2019 while the manufacturing and office space is slated for 2021.

The $40 million infusion is part of the city’s New York Works program, which aims to create 100,000 well-paying manufacturing and industrial jobs in 10 years.

“New York City grew up around the Brooklyn Navy Yard and thanks to the City’s $40 million New York Works investment in 399 Sands Street, the Yard will continue to fuel growth, and provide manufacturing and creative jobs for generations to come,” said Alicia Glen, deputy mayor for Housing and Economic Development.

399 Sands Street is part of the larger Admirals Row development being tackled by Steiner NYC. The complex at the corner of Flushing Street and Navy Street will feature 356,000 s/f of industrial space, 700 parking spots and 90,000 s/f of retail space–75,000 of which was claimed by the anchor tenant Wegman’s. The first three of the Admirals Row buildings are under construction and two historic structures are being reconstructed for reuse.

“Brooklyn is the home, and now workplace, of the creative class,” Doug Steiner, chairman of Steiner NYC, said. “This is where the job growth is, and where it needs to continue. Admirals Row, together with 399 Sands, represents a new urban model for mixed-use development.”

According to the city, the 399 Sands Street project is expected to create 700 to 1,000 permanent, high-quality jobs.

“We’re increasingly hearing from companies who want to be here not just because the Navy Yard provides an opportunity to sustain a business, but also to grow one,” said David Ehrenberg, the president and CEO of Brooklyn Navy Yard. “With this investment, 399 Sands will be developed with exactly that sort of tenant in mind.”