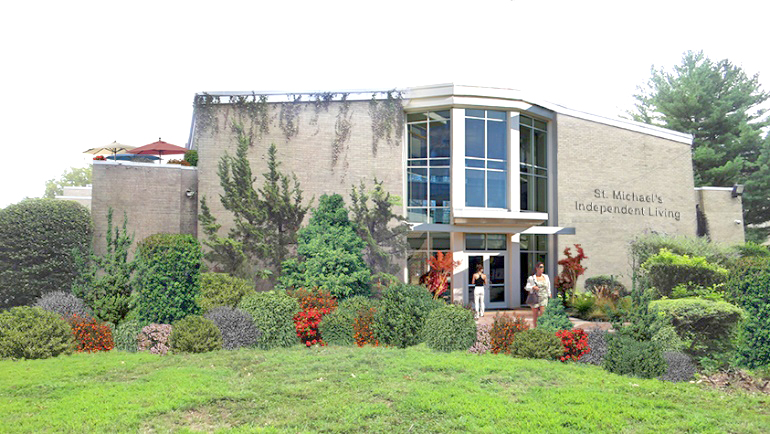 St. Michael’s, which is developing the complex at 1220 Front St. in Uniondale, is renovating an existing 90,000 s/f building on the site to create 21 one-bedroom independent living apartments, 48 private independent and assisted living studios with private bathrooms, nursing care beds and a memory care unit serving elderly clients with dementia and Alzheimer’s.

Efstathios “Steve” Valiotis, principal of Alma Realty, which owns and manages real estate in nearby Hempstead and Valley Stream, donateed $10 million towards the project.

“As a company with a long record of investing in Long Island communities to create transit-friendly livable urban environments, we are thrilled to offer our strong support to St. Michael’s on this important project, which will serve a pressing need to care for the elderly,” said Valiotis.

“By providing these critical support services, St. Michael’s is giving families from throughout the area a reason to stay in the community, close to home, and remain connected to their loved ones.”

“We are eternally indebted to Mr. Valiotis and his wife Stamatiki, for their incredibly generous donation towards the expansion of St. Michael’s”, stated His Grace Bishop Andonios, Director of the facility. “It is the largest single gift the Home has received in its 60-year history and is certainly a testament to the incredible magnanimity of the Valiotis family and their deep concern for their fellow citizens. “This new state-of-the-art facility will dramatically impact the lives of so many elderly and their families who entrust their care to St. Michael’s which for six decades has offered quality care to the elderly and now looks to expand its levels of care and outreach to the community.”

The property is close to several parishes of the Greek Orthodox Archdiocese of America, including the Cathedral of St. Paul’s in Hempstead, St. Demetrios Church in Merrick, and the Church of the Resurrection in Brookville.

St. Michael’s purchased the property from the Rockville Centre Diocese of the Roman Catholic Church for $7 million in 2014. With the efforts of Bishop Andonios and the Board of Trustees, it is in the midst of a $35 million capital campaign that will help fund the top-to-bottom renovation of the building on the property.

The brand new independent living facilities will an on-site beauty salon, library and computer labs and access to religious services.

First opened in Yonkersin 1958, St. Michael’s is the only Greek Orthodox facility of its kind in the United States.