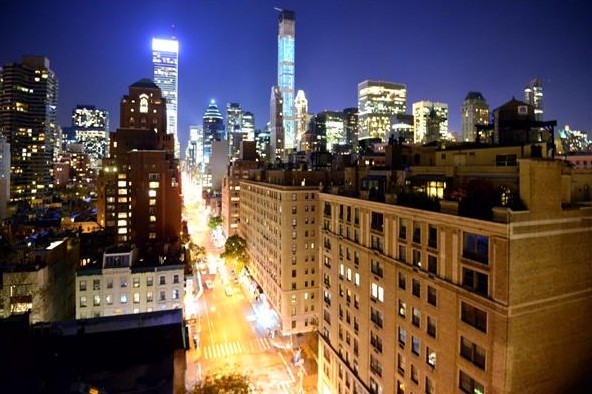 Peggy Dahan is a lifer in real estate.  A broker with boutique firm Siderow Organization, she had an early start in the industry, stretching all the way back to when she occupied her mother’s womb.

“We grew up in real estate. We’ve owned apartments in Manhattan since before I was born,” she said.

Dahan, who grew up in the Kew Gardens neighborhood of Queens, came from an immigrant family that was better off than most.  Her father, who migrated to New York City from Afghanistan in the 1960s, bought their nine-bedroom home in Park Lane with no regard for costs. “He loved the house. He went to the broker and he said, ‘Here’s an open check, I want this house,’” she said.

Her family lived in the house for forty years. They left after she got married. “I’m the youngest. When I got married, my mother said, ‘If all my kids are out of the house, I don’t need a nine-bedroom home.’”

Over the years, their portfolio had grown to cover properties in New York City, Miami and the South American country of Colombia.

This life-long exposure to the industry, and residence in New York City, has led to a successful career highlighted by large deals.

In late 2013, Dahan was one-half of a team that handled a $14.25 million listing for a full-floor penthouse unit at Toll Brothers’ Upper East Side condo building, The Touraine. She also worked on a deal for a $5.2 million apartment at 530 East 76th Street in January of last year.

Dahan attributes the steady flow of deals to the clients that she has turned into actual friends.  “They’ve come to my home for dinner. We’ve gone out to parties together. We’ve gone out for drinks… A gentleman that I sold an apartment to, I went to one of his daughters’ wedding and now I have another wedding of the other daughter. I found both daughters their rental apartments,” she said.

“Everyone always has a friend to buy, a mother to buy, a grandmother, a niece, a nephew. That’s how it is.”

While she considers real estate as something that “was always a part of (her) life,” her trajectory to the industry was not a straight shot. Her detour included a career as a gemologist. She had a royal pedigree to uphold, noting that her father was known as “the king of emeralds.”  She learned her trade at the Gemological Institute of America and formed a specialization for dealing with diamonds and emeralds. She speaks of her time as a gemologist as if she was recalling a time when she got stuck in an elevator. Perhaps this is why she ended it as she started a family and grew weary of packing suitcases.

“We traveled all over the world. I did a lot of shows. And then, when I got married… I decided I didn’t want to travel to all the shows,” she said.  “I’ve been Asia, to Europe, to Africa. I’ve been everywhere. I was doing shows everywhere. I decided I wanted to settle down… That’s how I got into real estate. I was tired of traveling all over the world for diamonds and shows.”
In hindsight, she couldn’t have picked a worst time to enter the industry. She settled into her new occupation just before what she called “the beautiful crash” of 2007-2008.

“I started in real estate three months before the crash,” she said.

Dahan started her real estate career in Douglas Elliman at the urging of a family friend. She stayed for five years, switching to Siderow as she realized that she was more suited for a boutique firm.

“I prefer a smaller firm. It’s like, everyone’s helping. I couldn’t have done that in a big firm. Here I know that I can trust (people). It’s more a family-friendly relationship,” she said.

The lean times created a sink-or-swim atmosphere, which she survived by scaling back her targets.  “If you screw up with a smaller deal, you don’t feel as bad,” she said. “I wasn’t great in selling because nobody was buying, which was better for me because I started doing rentals. I did my first deal within two months. I specialized in high-end rentals and then we did deals anywhere from $3,000 to $41,000.”

Unlike a lot of people who vanished from the industry when the economy skidded to its depths, Dahan said it didn’t even occur to her go for another career change.

“It never even entered my head that I wouldn’t do well in it,” she said. “I had a true belief in it. And New York City is always making money, even if you’re at the bottom of the curve.ˮ