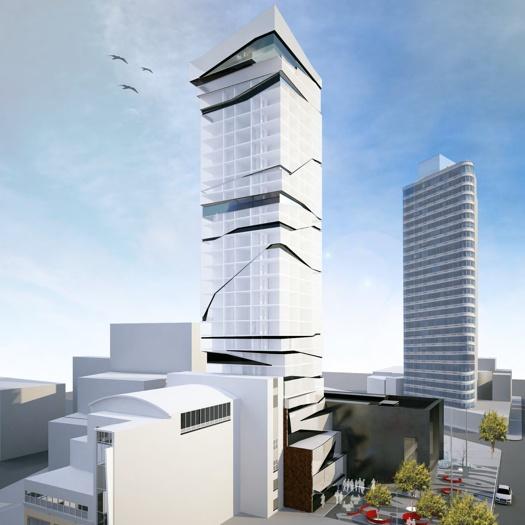 A year after plans for a 200-room hotel tower in Brooklyn’s BAM district were first announced, the project is a big step closer to finally getting started.

Investment and advisory firm Post Road Partners has financed a $8.25 million bridge loan for the site with a one-year term. The developer, Second Development Services, plans to use the money to buy air rights for the tower and pay for “certain pre-development costs”.

The 30-story tower, designed by Thomas Leeser, will rise at 95 Rockwell Place in the BAM Cultural District, between the Mark Morris Dance Center and Theatre for a New Audience. Plans for the tower were first reported in February 2013.

“Once completed, the new hotel will be one of the few upscale options in the supply constrained Brooklyn hotel market,” John Todd, managing partner of Post Road Partners, said in a press release.

“The location within the BAM Cultural District is amazing and the Property will be an attractive addition to the public and private investments which have already been made in the immediate area,” added Todd, who worked on the deal with Post Road’s managing partner Karim Demirdache.

The project will be the latest in a flurry of new hotel developments currently under way in Williamsburg and nearby Downtown Brooklyn. In December, InterContinental Hotels Group purchased a Downtown site with plans to build a 204-room hotel.