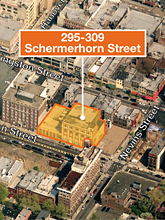 Eastern Consolidated has been retained as the exclusive agent to market for sale, for the first time in 31 years, 295-309 Schermerhorn Street.

The future development site in Downtown Brooklyn/Boerum Hill border is expected to fetch around $60 million.

The four-story, 34,000 s/f property is currently owned by the International Society for Krishna Consciousness, which will relocate.

The site can accommodate up to 187,000 s/f of new development, with inclusionary housing bonuses and C2-4/DB special district zoning.

Situated on the north side of Schermerhorn Street, between Nevins and Bond Streets, the property is steps from Atlantic Center, Barclays Center, BAM Cultural District, and the Downtown Brooklyn Central Business District.

“Investors have a truly remarkable opportunity to obtain a site in Downtown Brooklyn, that hasn’t been available in 31 years, and redevelop it into state-of-the-art product in one of the most exciting neighborhoods in New York City,” said David Schechtman, principal and executive managing director with Eastern Consolidated, who along with associate director Andrew Sasson and senior director of financial services Gary Meese represents the seller on an exclusive basis.

“As America has returned to its urban core, Downtown Brooklyn has emerged as one of the most desirable locations,” Schechtman noted.
“The explosive growth in this area has created an inflection point of commercial, residential, and cultural activity.”